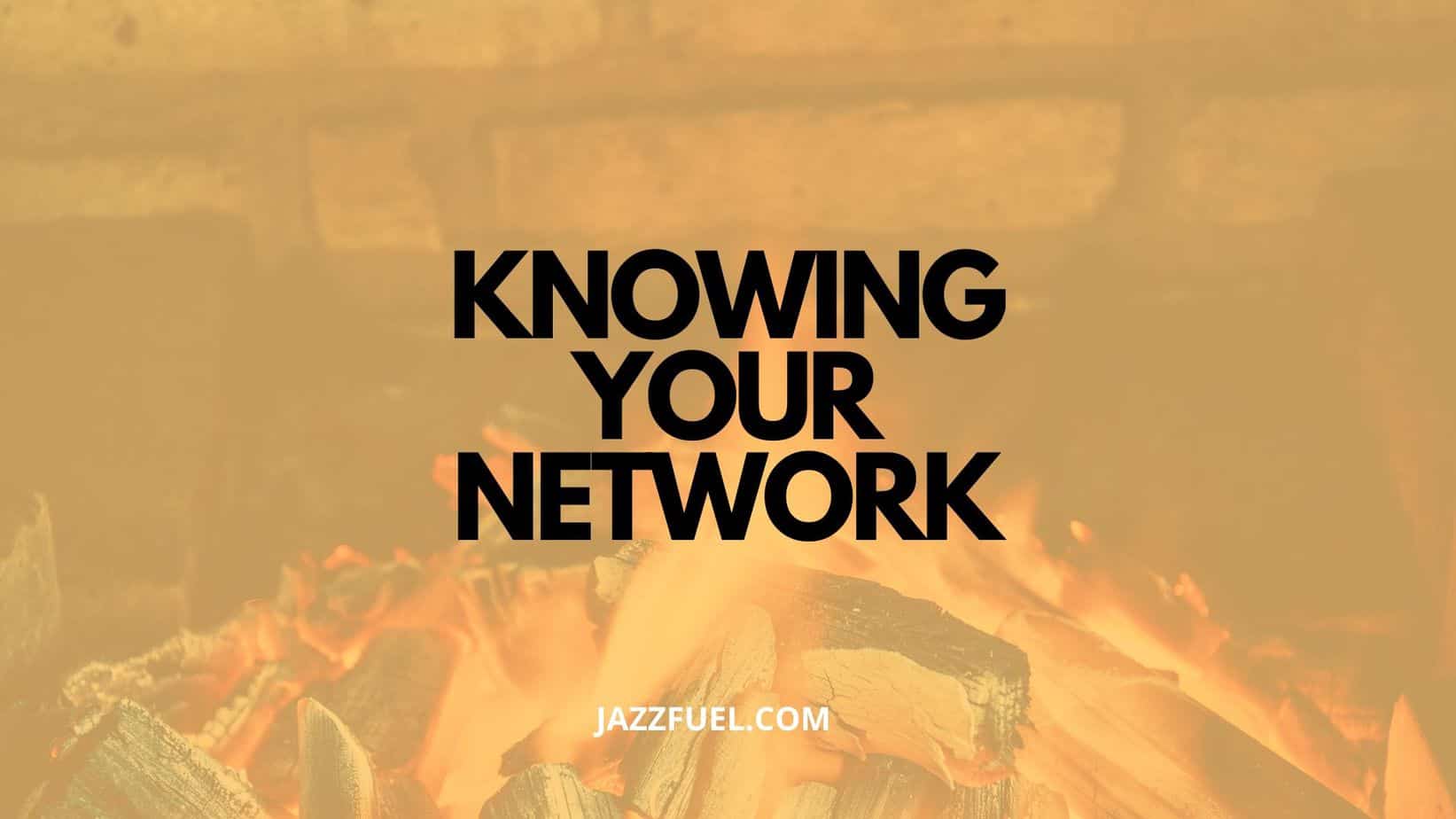 When it comes to building a sustainable, long-term career as a creative jazz musician, the strength of your professional network plays an important role.

This might not be the sexiest topic, but I’ve seen first hand how the simple 5 minute task in this article lead to actual gigs and press coverage in the long term.

Your professional network = the group of people inside the industry who know what you do and have either already supported you in some way,  or shown that they would be happy to do so in the future.

In this article we’re going to look at a simple way for making sure you’re actually aware of everyone in your network, as well as how and why you should keep in touch with them all.

[NOTE: I hosted a live ‘walkthrough’ the (free) platform I use to manage all my contacts such as clubs, festival bookers & journalists on Monday. You can check it out here]

I try to avoid that awful corporate  jargon, but there’s a famous business quote which is quite appropriate here:

“Your network is your net worth”

Broadly speaking, as long as you’re making great music and presenting it in the right ways, the bigger your network of promoters, journalists and other influencers, the more your project will be amplified with gigs and press coverage.

Anyway, assuming you agree to some extent with this, most people jump straight to the thought of:

“How can I connect with more people?”

That’s important, of course, but there’s a much easier (and equally important) ‘win’ for you to work on first: being properly aware of everyone in your existing network and making sure you’re keeping them ‘warm.’

Who’s in your existing network?

You connect with a promoter or a journalist either in real life (at a gig, conference or other networking event) or digitally (via a phone call, email or personal introduction) and establish that they like what you do.

Unless they’re in a position to *do* something right away (book you, review you, recommend you) then the plan is simply to ‘keep in touch’ until some point in the future.

At this point, I’d suggest they are in your ‘network.’

If you’re not sure, ask yourself this:

“Could I reach out to this person with a very specific and easy-to-respond-to request – such as a jazz club recommendation in their home city or feedback on my latest single – and expect a reply?”

If you wait until the next time you need something from these people, there are a couple of problems:

So, with that in mind, the goal is this: once you’ve identified everyone you’re already connected to, have a plan for keeping them updated fairly regularly so they don’t forget.

Or, to stick with the analogy: stop that connection from ‘cooling down’

Here’s one real-life example of what it looks like, in action:

A few years ago, I got a slightly unusual email from a musician: he wasn’t asking me to book him, he just reminded me that we had some mutual connections and asked if he could stop by the office for a chat.

We had a coffee and then, after that, he’d get in touch (personally) every so often with a little update on his project. A new video, an award, a magazine feature…

Anyway, a few months later, a promoter I was working with asked me for a proposal and, as none of my roster was available, I suggested this guy.

The result: he did a 3-date tour in Spain with his band.

I’m not suggesting that this series of events changed his career in any big way, but it’s an important message: keeping in good contact with your network can lead to interesting, unexpected opportunities at some point in the future.

His music was high level and relevant for this promoter, but then so were a number of other projects out there. The thing that made the difference was that he was proactive and on the top of my mind.

Before you can work on any of this, you need to actually know, very specifically, who’s in your network.

This might sound basic, but it’s the easiest method I know. I first saw it done by Eva Frost of Jazz Denmark:

If you’re anything like me, you’ll surprise yourself by coming up with more names that you thought you would.

Chances are (and let me know if I’m wrong!) there’ll be a few you haven’t been in touch with for ages: drop them a note now… See how things are going… Share something interesting…

Once you’ve completed this exercise, make sure you have a good system for storing all of those names, along with their email addresses and any other important information.

“In my head” might work well at the start, but it’s not sustainable if you plan to keep expanding this.

A simple, basic method would be to keep them all in a spreadsheet. The key is to have a space to note the last time you were in contact with them. That way, you can be reminded each time you check it as to whether there’s anyone you have neglected recently. 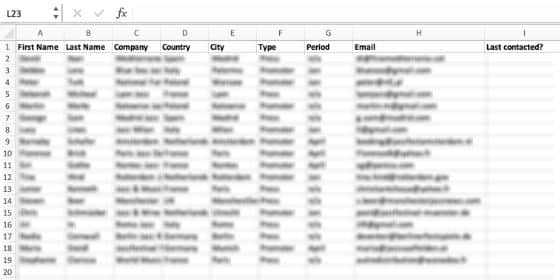 If you’re even slightly technically savvy, I’d highly recommend using a CRM as an alternative to a spreadsheet.

Simply put, a ‘Customer Relationship Manager’ is an online database tool that lets you store your contacts and add any information alongside them.

The big benefit is that, once set up, it’s completely searchable, it allows you to set reminders and some even let you send emails from directly inside.

Personally, I use (and highly recommend) Hubspot for both press outreach and club/festival pitching. It takes a little time to get used to it, but trust me: it will save you hours in the long term, not to mention the benefits of improving the way you manage your network.

And, the big bonus: whilst there are paid versions to do some of the more ‘fancy’ things, the basic version is completely FREE and can do everything you, as a musician, need it to. 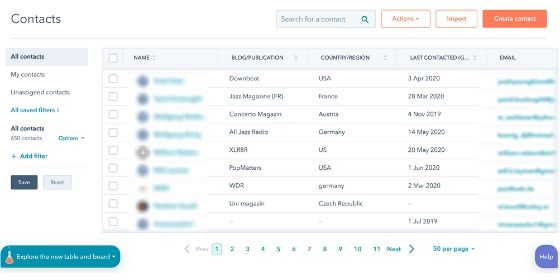 Setting up your professional database

You can check my free live ‘walkthrough’ of this but, as an example, here are just some of the things I can easily do on mine: 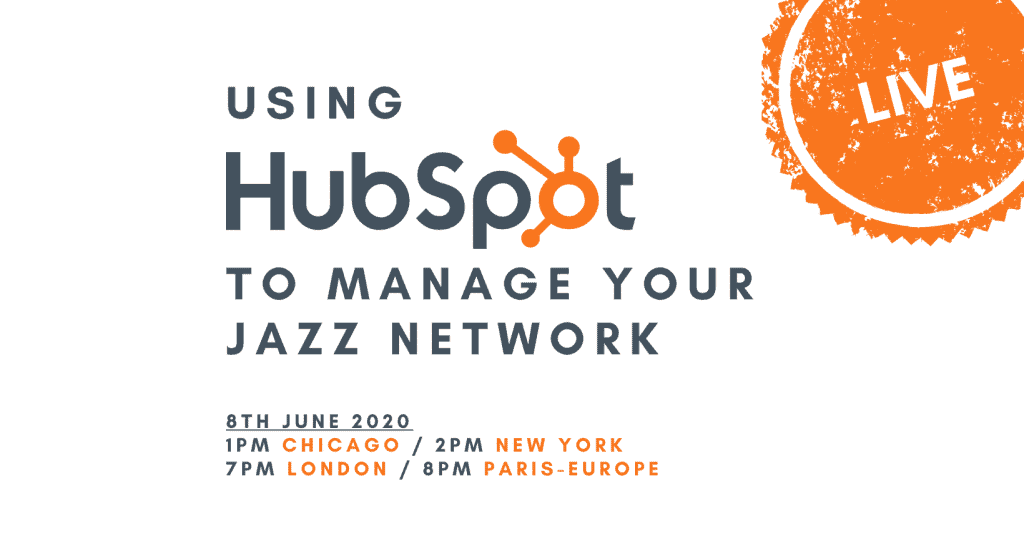 Whether this is a new topic for you, or something you’ve been actively working on for years, I’d suggest taking a few minutes to think through this:

If you have any follow up questions on this, feel free to post in the comments section. And stay tuned for part 2 which is focused on the slightly more common question of: “how can I grow my network as a jazz musician?“