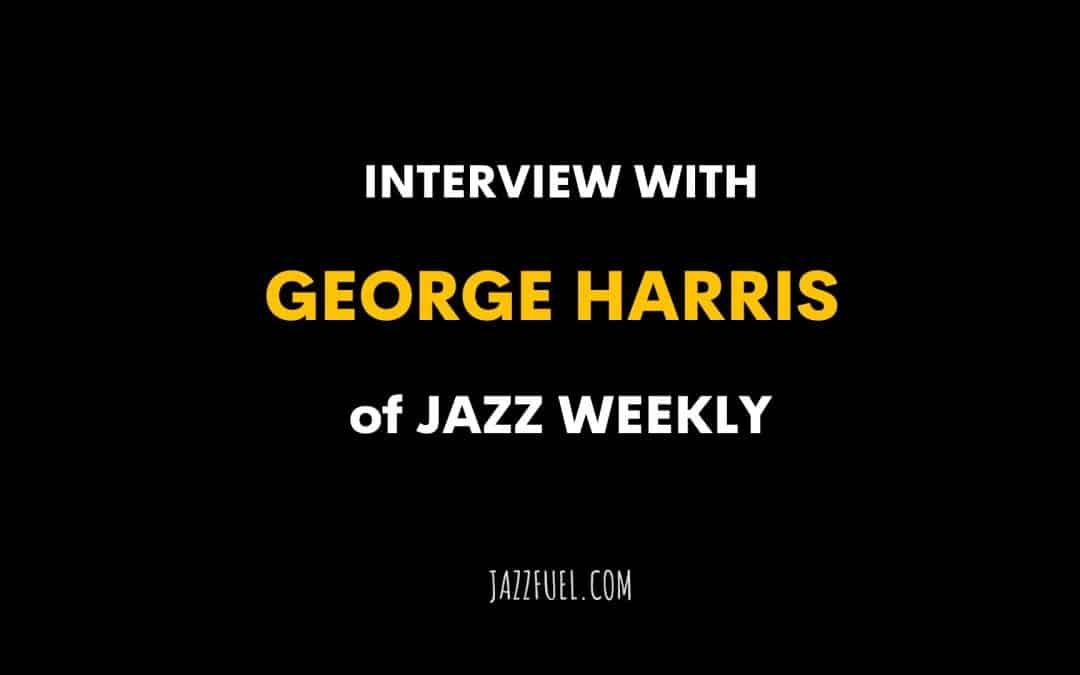 For this edition of the Jazzfuel industry interviews series, we talk to George W. Harris who is editor & writer for US-based online magazine Jazz Weekly.

With a site tagline of “Creative Music and other forms of Avant Garde” he covers both new international releases and live gigs from his base in California.

He shares some good insight into being on the receiving end of hundreds of new CDs a month, and also shares a great quote from Sonny Rollins (which was new to me!) describing CDs as “invitations to concerts”…

Can you talk a bit about your own life and how you came to the point of starting Jazz Weekly?

I wrote an email to WORLD magazine (a news magazine) why they never covered jazz, and they told me to try writing one. I contacted labels, etc for people to interview and started writing articles/reviews.

The magazine changed formats, but I started getting inundated with cds. I contacted the labels, and they said, “you’ll find something”.

I noticed that at one of the local jazz clubs there was a new paper, ALL ABOUT JAZZ, with a lot of empty space in the pages. I contacted the editor, and he said I could start doing interviews/reviews.

I did that for a number of years, but the paper was losing money, so the editor switched to an online organization called “jazzweekly.com”.

Due to the attrition of the other writers, I became the editor and only writer. It all fell into my hands. For some strange reason, I’m getting 80-90K hits a month.

You published a mixture of album reviews and concert reviews. What are the different ingredients that go into making each of those formats special?

The concert reviews are to encourage people to see jazz “live”, which is by far the best way to take it in. I try to capture the atmosphere of the evening.

The CDs are, as Sonny Rollins once said, “invitations to concerts”. I try to convey what the artist is trying to communicate, and judge accordingly.

Of course, I add my own opinion as to the worth of that idea being communicated. As Roy Eldridge once said, every song has a message, and most of the time it’s ‘I need tuning!’”

You’ve interviewed some great guests, including this one with Dave Liebman back in 2020. Any insight about what turns a great jazz musician into a big name on the scene?

The biggest factor is, as Winston Churchill said, “NEVER SURRENDER!”.

Also, you have to be able to communicate with your audience. You need to make the people glad they came.

What was your personal route into jazz?

I got tired of the toxicity of rock music, with the nihilistic lyrics and ear shattering concerts. A student friend turned me on to Weather Report while in college, and I liked it.

First real gig was seeing Kenny Burrell with Jerome Richardson. I was blown away at how happy everyone was, as well as how approachable the musicians were before and after the set.

Even more important, after a rock concert, you’re all tired, ears aching, smell like someone’s joint, and you just want go home.

After a jazz gig, I felt pumped and wanted to still go out and do something. I loved the positivity of the gig and “the hang”, which I still do.

You’ve been running ‘Jazz Weekly’ for more than a decade. How has the industry – in particular journalism – changed in that time?

Fewer people send CDs/DVDs; most send downloads which are a total pain to go through.

Most journalists have dropped out, but because I have a “day” job; I do this as a hobby.

I get enough money through ads to keep my wife happy, and I use the money to also donate to clubs that were closed due to the draconian lockdown.

If you were a new artist on the scene with a brand new album and $1000 to promote it, what would you spend it on?

A comfortable chair at a good corner to play the album over and over in front of pedestrians with an open case.

You laugh, but I know many musicians that make a better living doing that than by touring, etc.

Where do you discover new music these days?

Besides the scores of CDs I get per week, I still enjoy going to the clubs, although most in LA have closed down. That is the most disheartening thing about COVID.

I’m disappointed that the clubs caved in to the draconian COVID restrictions and didn’t push back on the vaccine mandate.

Jazz used to be known as the inclusive music, and the clubs segregated the audience into “vaccinated” and “unvaccinated” members.

Most of the owners and musicians were too afraid to give concerts; they had a great opportunity to be bold and “go against the flow” and they caved in to the government. What if jazz had done that regarding race or sex?

In retrospect, the musicians and clubs looked like Chicken Little when they could have been community leaders.

I wrote a few articles on this and was criticized; in retrospect, most doctors I know think the lockdown was a major mistake.

Thanks to George for taking the time to answer these questions.

If you’re looking to discover more, you can find his latest articles via Jazzweekly.com or connect via Twitter.