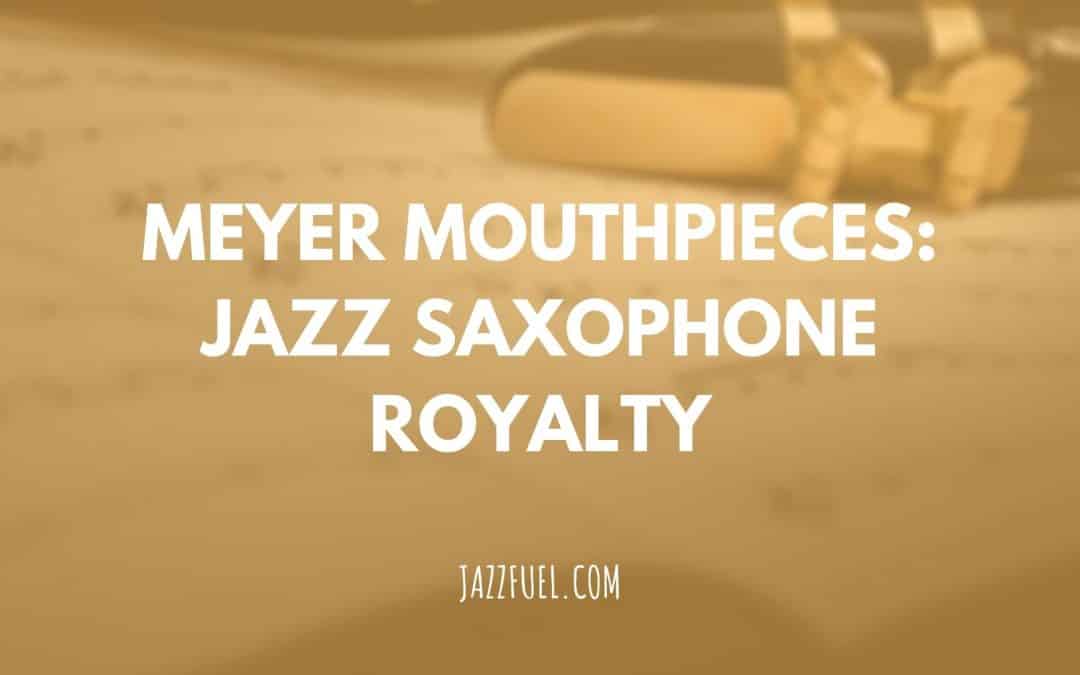 As every serious player knows, the saxophone mouthpiece may be small, but it can play a big role in sound production.

In this article we’re going to look at the story of Meyer mouthpieces, which have been big in the world of jazz saxophone as far back as the 1930s, as well as recommend some of their modern products.

The brand has gone through a number of name and product changes, from its early days as The Meyer Bros Mouthpiece Company, to its Meyer New York products and the company’s change of ownership, through to its current status as a respected producer of popular, versatile and affordable mouthpieces.

One thing that stayed the same, though, were the jazz greats making this their mouthpiece of choice.

In this article will look at the history of the company, some of the famous saxophonists who played and continue to play Meyer mouthpieces, and some of the products that the brand currently has on sale for both alto and tenor saxophones.

The History of Meyer

Things started to get more serious in 1931, when they patented a ‘bite plate inlay’, along with Otto Link, another famed mouthpiece manufacturer.

In 1936 Meyer Bros, as they were now known, began producing the Metal Series I. This was made from silver alloyed with other semi-precious metals, with later versions made from gold-plated brass.

An early advert claimed that the mouthpiece would “improve your playing and increase your earning powers”.

Experts consider the Tru Flex, production of which began in 1937, to be the first Meyer Bros mouthpiece of major significance.

These have a distinctive ‘cut-out’ engraving on the table section of the mouthpiece, which was intended to allow the base of the reed to vibrate more freely, although this feature was subsequently dropped.

From 1938 they began to produce the Tru Flex in hard rubber, in addition to the metal model. 1940 saw the introduction of the now-rare Crystalite model, which was made from a distinctive clear plastic.

During the 1930s Meyer also made mouthpieces for clarinet, as well as trumpet, trombone and other brass instruments.

Production of Meyer’s most famous model began in 1948.

Medium, however, was and remains by far the most popular option.

Early versions have the chamber size marked beneath the table of the mouthpiece, whilst later versions have it under the Meyer Bros logo on the back.

These mouthpieces, which are made from high quality hard rubber, helped the company establish a reputation for first rate craftsmanship, and this model is considered to have some of the highest quality finishing in saxophone mouthpiece history.

Interestingly, although they have always created mouthpieces for the full range of saxes, the Meyer brand has generally been most associated with the alto, and it is the vintage Meyer alto saxophone mouthpieces that are most sought after.

Meanwhile, Otto Link tended to be the favoured mouthpiece brand of tenor saxophonists.

Between 1960 and 1970 Meyer Bros produced its Series 5 model, also known as the ‘New York USA’, so called because of the stamp on the top side of the shank.

These mouthpieces also continue to be highly desirable and are noted for their resonant tonal qualities due to a thinner body in comparison to the earlier model.

In 1971 Ed J. Meyer sold the company to J.J. Babbitt, one of the world’s oldest saxophone mouthpiece manufacturers and distributors. J.J. Babbitt continues to own Meyer, in addition to fellow mouthpiece brand Otto Link.

The product boxes continued to be stamped with ‘Meyer Bros’ until 1987 but the brand is now simply known as Meyer.

Meyer mouthpieces made during what is considered the company’s ‘golden period’ – between approximately 1948 and 1970 – are lauded as some of the finest saxophone mouthpieces of all time.

There are still some in circulation, but they can fetch eye-watering sums and the quality and characteristics can vary significantly.

Your best bet, if you’re looking to pick up one of these, is to make sure you’re subscribed to saxophone shops & forums around the world!

A number of modern day manufacturers have tried to recreate classic Meyer models.

Indeed, Meyer itself made a ‘Meyer New York Limited Edition’ model in 1995, which used a different rubber compound to standard modern Meyers and had a chamber that was shaped more like the New York USA models.

Manufacturers Drake have made a mouthpiece based on the exact geometry of alto legend Phil Woods’ Meyer 5M from the 1950s, which they describe as “the quintessential straight-ahead jazz mouthpiece.”

The company’s earliest mouthpieces from the 1930s and early ‘40s are not as acclaimed as later models, and they would certainly feel strange compared to a modern piece, but tenor saxophonist Ike Quebec played a brass version.

Cannonball Adderley famously played a Meyer alto mouthpiece for most of his career, using a Meyer Bros New York model with a 5 tip opening and a medium chamber until the mid 1960s, when he switched to a Meyer New York USA. With his bright and bluesy tone, heard on some of the greatest jazz albums of all time, he helped increase the brand’s popularity significantly.

Likewise, Phil Woods used a Meyer Bros New York on his alto, also with a medium chamber and 5 tip opening, for a long period.

Other great players to use or have used Meyers include Lou Donaldson, Vincent Herring and Charles McPherson. It’s interesting to note that these alto players, like Woods and Adderley, all have big, bright sounds rooted in the bebop tradition.

Today, new Meyer sax mouthpieces remain a go-to choice for both the advancing music student and the seasoned professional.

They are priced comparatively affordably and are considered something of a ‘blank canvas’: they will work well in almost any musical setting, from classical, to straight ahead jazz, to funk and big band.

In addition to the standard Ebonite Meyer, the company also now has the ‘G’ series, which aims to provide a cooler, darker, more mellow sound inspired by the likes of Paul Desmond.

For its 100th anniversary Meyer has also reintroduced the NY model, a modern tribute to the golden era of Meyer Bros mouthpieces, which is slightly more expensive than the brand’s other products.

The NY model is only available for the alto saxophone, but the standard Meyer and the G series are available for each of the 4 main types of saxophone.

While Meyer is best known for its hard rubber and now ebonite mouthpieces, they now also produce a range of metal mouthpieces, which produce a more hard-edged sound.

Thanks for checking out this brief history of Meyer saxophone mouthpieces!

If you’re looking for more general advice on which instrument to buy, check out our round up of 10 of the best saxophone brands from around the world.

And, as always, head over to our saxophone homepage for the latest articles on this topic.