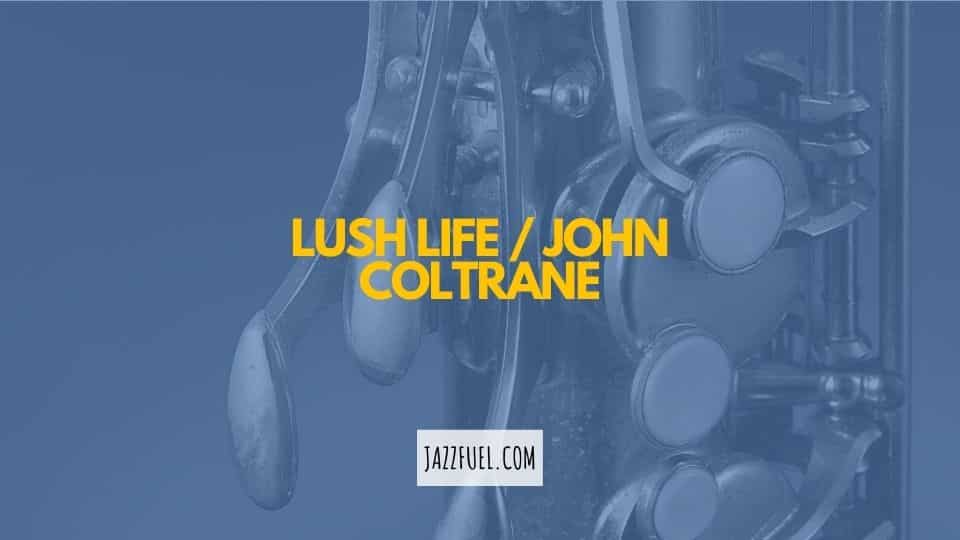 For a musician as virtuosic and genre-changing as tenor saxophonist John Coltrane, getting into the details of each of his albums is a great way of piecing together his development and influences.

Whilst it was released in 1961 on the Prestige label, tenor saxophonist John Coltrane’s Lush Life album is actually a compilation of tracks recorded in 1957 and 1958.

With that in mind, it documents a pivotal point in his development; on one hand, he was an in-demand hard bop sideman, recording extensively with Miles Davis.

On the other, he was forging his own vision as an improvisor, both with his own groups and alongside iconic pianist Thelonious Monk.

In fact, just months after these recordings, Downbeat jazz critic Ira Gitler coined the term ‘sheets of sound’ to describe the dense and high-octane style Coltrane was developing.

Given the spaced out nature of the recording schedule – split between sessions in 1957 & 1958 – the line-up features a mixture of line-ups and musicians.

Whilst it may have been an exercise in money-making from the label – making the most of the fame of an artist who had moved onto another label – it is still a highly valuable and exciting insight into the career of a jazz great.

Not to mention a great listen for any Coltrane fan!

Given their place in the timeline of his rapid growth, these recordings give a fascinating insight into Coltrane’s harmonic conception and improvising style, over more ‘standard’ repertoire than later recordings.

Written by Jimmy Van Heusen, this song is a classic jazz ballad that’s been covered by everyone from Chet Baker and Bill Evans, to Bjork and Diana Krall.

Coltrane’s version – without any piano or guitar providing harmony – gives him the freedom to showcase his dexterity as an improvisor as well as his sensitivity on ballads.

Another jazz standard, this Cole Porter song is cleverly arranged between swing and latin feel and, once again, shows Coltrane’s mastery of standard chord progressions.

Hearing the freedom with which he manoeuvres through the changes, it’s perhaps unsurprising just how far his explorations would take him in the coming years.

Continuing tradition as old as jazz itself, Lush Life features an original blues composition in the form of Trane’s Slo Blues.

The melody may be as simple as the name itself, but once again this standard form – along with the lack of harmonic instrument – gives the listener a sense of the junction which Coltrane has arrived at.

On one hand influenced by the hard bop style for which he was celebrated; on the other searching for that next step.

The title track Lush Life is a composition by the legendary songwriter Billy Strayhorn and has been recorded by countless greats over the years.

John Coltrane himself released another classic version of it with the singer Johnny Hartmann in 1963 which is well worth a (re)listen!

Coming off the back of three pianoless trio arrangements, the addition of pianist Red Garland provides a whole new platform for Coltrane’s tenor saxophone to play off of, whilst trumpeter Donald Byrd provides yet another layer.

Showcasing his sensitivity as a bandleader and improvisor, you can really hear a shift in his approach.

I Hear a Rhapsody

This track is perhaps most reminiscent of his celebrated Hard Bop album Blue Train which was actually recorded in between two of the Lush Life sessions.

Driving swing and a seemingly endless flow of ideas, it’s a glorious finish to an album which, whilst often not as revered as others which came before or after, is an essential addition to any Coltrane collection.

Of course, you can find this album in all the usual places, but to help speed things up, here are some of the most popular ones:

So that’s Lush Life. Are you looking for some more legendary recordings from the saxophonist John Coltrane?

We put together a round up of 10 of his best albums which highlight some of the greats from early recordings like Blue Train to his later free, spiritual output like A Love Supreme & Ascension, via the classic Giant Steps.

You can also check our pick of the best saxophone players in history.