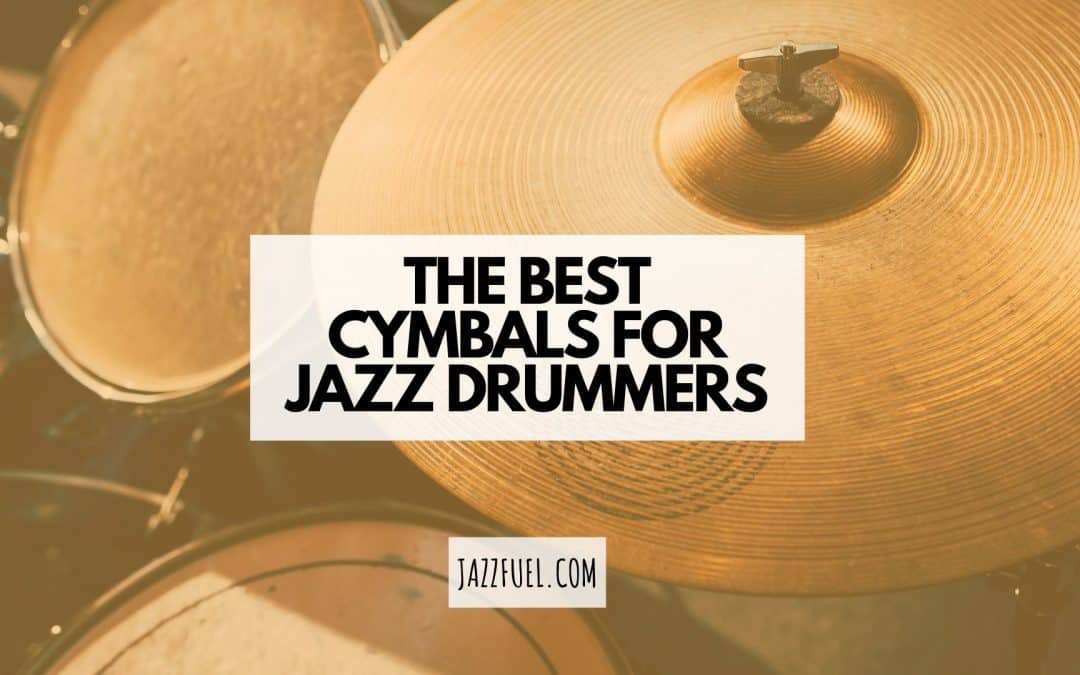 Often the most-used part of the drum kit, a drummers’ choice of cymbals for jazz can make a massive impact on their sound and performance.

In this article we’ve pulled together the key considerations when buying jazz cymbals, and reviewed five favourites from our resident drum specialist.

Jazz is a genre of music characterised by the expression of the individual.

Everyone has a unique musical approach and sound, and this extends to a person’s choice of equipment. This especially applies to a drummer’s cymbals.

Not only are they are often the most used part of the drum kit, they’re also highest sound in the ensemble, and the primary means of playing time – arguably a drummer’s principle role!

So when it comes to choosing jazz cymbals, how should you go about it?

How do you know what the cymbal will sound like in different playing contexts and acoustics, when you’ve only heard it in the back of a shop?

In this article we’re going to look at the key considerations when buying cymbals for jazz, as well as review five of our favourites covering the jazz ride cymbal, hi-hat and china.

Considerations when choosing cymbals for jazz

When it comes to researching and buying new jazz cymbals, there are plenty of choices to be made!

We’ve outlined some of the many things to consider; asking yourself these questions early n in the process will help you focus in on the right piece of equipment for you.

The effect of size, weight and shape on a jazz cymbal

What’s the purpose of this particular cymbal?

How useful will this cymbal be for you right now?

Is this a high pedigree jazz cymbal?

Of course, if you’re attracted to a sound of a certain cymbal, it may be best to go with your gut-reaction.

You shouldn’t buy a piece of gear purely on the grounds that someone you respect has it, because what suits them might not be the best fit for you.

That being said, you should be aware of the options and use all the information you can find to avoid a costly addition to the dusty part of your cymbal bag!

The most famous cymbal company – and the oldest instrument manufacturer – in the world was founded in Constantinople in the early seventeenth century by Avedis Zildjian, and his descendants in the twentieth century were responsible for furnishing some of the most famous names in jazz with cymbals.

Today, the surviving cymbals of that era are rare and often sold for four-figure sums, rendering them out of reach for most of us.

Fortunately, Zildjian has attempted to recreate these cymbals in their Constantinople series.

Adam Nussbaum has been involved in giving a musician’s perspective to the process, and these cymbals have a great stick response and wide dynamic range.

If you want something which looks, feels and (almost) sounds like the instruments of the past, these are easily available and work well in many jazz contexts.

Crescent Cymbals was originally an independent cymbal company set up by drummers, one of which was the great Jeff Hamilton.

It has since been acquired by Sabian, and thankfully Hamilton is still at the heart of the brand.

His own Hammertone series aims to give equal importance to stick definition and overtones, with a decay that lasts just long enough before disappearing gradually to blend with the band.

The cymbals also aspire to give you different pitches depending on how far from the bell you play in order to complement the instrument you’re accompanying, and the bell is hammered more heavily than most cymbals to be warm and bell-like without being too piercing.

A jazz hi-hat needs to be equally adept at being played with the stick and with the foot. The warm ‘swoosh’ of an open hi-hat is often made brittle in favour of a well-defined ‘chick’ sound for the 2s and 4s.

These New Beat Hi-Hats won’t win any awards for a silky-smooth Papa Jo Jones swing pattern, but they are very versatile and will be appropriate for everything from big bands to small groups.

Chick Corea was gifted a flat ride cymbal by Roy Haynes in the late ’60s which he owns to this day.

Corea apparently liked the way it complemented the piano so much that it appeared on many of his subsequent albums with other drummers, including Return To Forever (1972) with Airto Moreira.

The replica is not an exact copy of the cymbal today, but an approximation of how it would have sounded at the time that Roy Haynes was playing it.

Unfortunately this is a limited run and so may be hard to come by; therefore, we recommend a Paiste Formula 602 Medium Flatride (20”) if they are unavailable at the time of reading this article.

Based on Mel Lewis’ China Cymbal

Mel Lewis was introduced to Swish cymbals by Dizzy Gillespie, who owned one and required his drummers to play it behind his solos.

A Swish cymbal (often categorised as a Chinese cymbal on account of its curved edge) was originally used as an effect cymbal in the Swing Era, and was later made famous by Lewis in his big band work.

Played as a ride, this huge cymbal needs to be played with a light touch or it will overpower the band – its size makes it difficult to control, and the rivets add to the all-encompassing nature of its sound.

Traditionally used behind the strongest soloist in the band, it can provide a comfortable carpet for the group to play on which a drier cymbal would not be able to achieve.

Thanks for checking out this guide to five of the best drum cymbals for playing jazz.

Hopefully it has flagged up some key considerations and given you some ideas on what might be most appropriate for you right now.

As we mentioned, a great way to research further is to find out what set up your favourite drummers played! You might be interested to check this round up of some of the most legendary jazz drummers of all time, or this round up of ten modern jazz drum greats.

Lastly, if you’re a beginner, don’t miss this guide on how to set up a drum kit correctly.