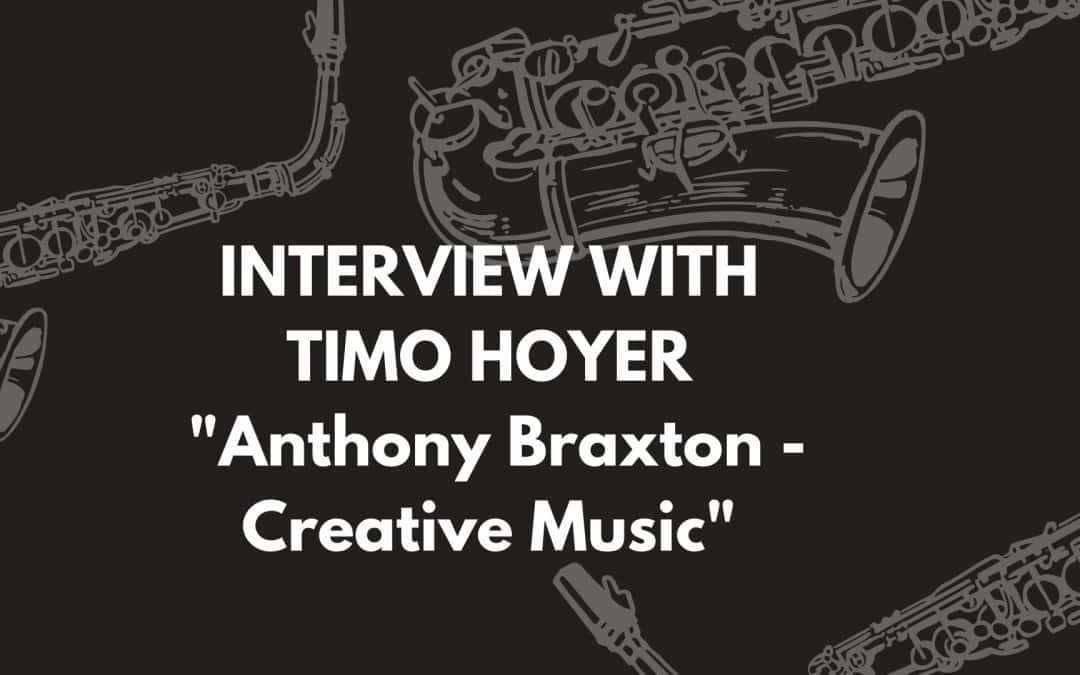 British journalist Bruce Lindsay once said: what would jazz sound like today if no-one had ever written about it?

Well someone who has dived very deeply into that topic is Timo Hoyer, a German professor and writer who recently published a deeply comprehensive book on legendary multi-instrumentalist Anthony Braxton.

To mark the release of Anthony Braxton – Creative Music we asked him some questions to dive deeper into the life and work of a true jazz pioneer.

You’ve been closely following the work of Anthony Braxton for over 30 years. What was it about him that initially captured your attention?

I heard Braxton for the first time in 1989 at a festival in Burghausen (Germany). I was 25 years old.

At that time I started to be fascinated by the so-called jazz avant-gardists: John Coltrane, Ornette Coleman, Cecil Taylor…

Braxton was playing in a trio with Adelhard Roidinger (bass) and Tony Oxley (drums). And it blew me away!

I have never experienced anything like this before. Every single note, any sound or phrase was new to me and so completely free of any cliché. The intensity of the concert was enormous.

The construction of the music seemed totally spontaneous and intuitive to me and at the same time thought out and organized.

That same year I went to Nickelsdorf in Austria for the legendary festival “Konfrontationen” where Braxton played an incredibly electrifying solo concert. And from then on it was finally clear to me that I wanted to hear and know more and more about this musician.

His extraordinary productivity has kept me quite busy over the years, but I am very grateful for every concert, every record, every conversation.

How do you define “creative music”?

He wants to make clear that he does not follow a particular idiom. His work does not fit into any pigeonhole. All known categories like jazz, contemporary classical music or world music fall short.

As much as he reveres, for instance, the jazz tradition, he does not allow any creative limitations to be imposed on him.

The jazz community has often resented this. Yet no one today can seriously deny that he has opened up so many new possibilities for improvised music like hardly anyone else.

The term “creative music” also indicates that the performers are substantially involved in the creation of the compositions. Braxton’s pieces almost always give the musicians a great portion of freedom in their realization, so that each performance has a different character.

Which works would you recommend for a first time listener of Braxton and why?

His discography includes about 300 records and if you ask me, all of them are absolutely worth listening to.

The musical spectrum is enormously broad, ranging from solo music to duos, trios, small sometimes more, sometimes less jazzy ensembles, orchestral and multi-orchestral music, operas, interpretations of jazz standards and open improvisation. So there are many different approaches to his work.

Those approaching him from a contemporary classical music perspective should listen to one of his stunning opera productions (e.g. Trillium J. The Non-Unconfessionables, New Braxton House NBH906), also check out his notated piano music (e.g. Piano Music (1968 – 2000), Leo LR901/909).

Ultimately, Braxton always strives for the surprising interweaving of composition (notation) and improvisation. In his terrific Ghost Trance Music he succeeded in this regard in an unparalleled way (e.g. 9 Compositions (Iridium) 2006, Firehouse 12 FH12-04-03-001).

And if you have a preference for the combination of brilliant improvisation and interactive electronics, you can best start with his electro-acoustic Diamond Curtain Wall Music (e.g. Trio (Victoriaville) 2007, Victo CD108).

Braxton mentions that “as a young guy, everyone looked at [him] as a guy who has no soul”, yet often connects his intellectual musical explorations with themes of spirituality, religion, and self-discovery. What are your thoughts on this interesting contradiction?

It has always been a mystery to me how anyone could find his music emotionless or cerebral.

He possesses as a performer and multi-instrumentalist breathtaking passion, expression and energy. Of course he is a (self-)reflective, eloquent artist who thinks and composes in terms of concepts, structures and systems. But this truly does not make his music soulless. What kind of spiritual experience you have with it, however, depends on yourself.

He has a great interest in ritual and ceremonial music; consider, for example, his incredible “Composition No. 95“ for two pianists who wear monk robes on stage!

Nevertheless Braxton does not write religious or prayer-like music. He does not want to suggest to anyone what he or she should feel or think.

Undoubtedly an influential composer and player, which contemporary artists  do you feel have followed in his footsteps or are greatly inspired by his work?

There are many. His groundbreaking solo music alone, beginning with the double album For Alto, has inspired a huge amount of performers, and not just saxophonists, to articulate themselves as soloists.

He has also been very intentional about encouraging young creative musicians, especially during his time as a professor at Mills College and Wesleyan University. I don’t know any other musician who has been so successful in mentoring. His ex-students include Taylor Ho Bynum, James Fei, Mary Halvorson, Steve Lehman, Gino Robair, Tyshawn Sorey and many others.

Although Braxton cites players like Charlie Parker, Paul Desmond and John Coltrane as his influences and has played alongside greats like Chick Corea, Dave Holland and Kenny Wheeler, it’s perhaps fair to say he isn’t as much of a household name. Why do you think that is?

In the seventies, when he was signed to the major-label Arista, he was hailed for a few years as the new superstar of the jazz avant-garde.

He certainly could have made more well sold albums like New York, Fall 1974, Five Pieces 1975 and Creative Orchestra Music 1976, but he wanted to remain independent and not be bound musically to any format. Fame and prosperity mean nothing to him, creative freedom everything.

His work is thoroughly uncompromising, idiosyncratic and therefore not easily accessible.

Today, at 76, he is as unwilling as ever to make concessions. And unlike many avant-gardists, who mellow with age and allow themselves to be celebrated as legends, he continues to seek aesthetic challenges.

Sitting somewhere in between jazz and contemporary classical music, what can you tell us about the influence of composers like Stockhausen and Schoenberg on Braxtons work?

From Stockhausen, Schoenberg, Cage, and somewhat later from Alban Berg and Richard Wagner, who awakened in him a passion for opera, Braxton has received musical ideas and conceptual inspiration that lie, so to speak, outside the horizon of jazz and improvised music.

But he is not a student or disciple of them in the strict sense; he has never adapted any of their techniques, that is, he has never worked with the twelve-tone method, the serial method, he has never prepared the piano and so on.

His so-called “heroes” have influenced him mainly in a mental way.

Basically, Stockhausen, Schoenberg, Cage, as well as Coltrane and Coleman are role models, insofar as he learned from them to define his own rules and permanently advance his own artistic development without regard to conventions and expectations.

There’s a video of Braxton’s quartet playing at the Cafe Oto in London last year, and within the hour-long set of challenging original music was an arrangement of Simon and Garfunkle’s ‘Bridge Over Troubled Water’. What do you think this says about him as a musician?

This was one of nine concerts Braxton gave with the trio of the English pianist Alexander Hawkins in Europe just before the Covid 19 lockdown.

On each night they played only compositions written by others, different ones each time: Jazz standards, pieces from the American Songbook, and even pop hits – four by Simon & Garfunkel, “Elinor Rigby” by the Beatles, etc.

Braxton is quite willing to consider popular music as creative music. And the way he interprets the titles, they really are. You can think on John Coltrane (“My Favorite Things”) or Miles Davis (“Time After Time”), they did it similarly.

By the way, the tour is almost completely documented on the recommendable box set Quartet (Standards) 2020 (New Braxton House NBH910).

What can readers expect from your book?

The book portrays Braxton’s life and work, his childhood in Chicago’s Black Belt, his development as a musician, his time in the Association for the Advancement of Creative Musicians, his family life on the brink of poverty up to his professorship and the establishment of his Tri-Centric Foundation. It shows a musician who held on to his visions against all odds.

I extensively cover his musical concepts, his aesthetic writings, performances, recordings and collaborations. No wonder that in the end the study has become over 700 pages. Thanks to the many photos and scores its a very beautiful and descriptive book about one of the most important creative musicians of our time.

Big thanks to Timo for taking the time to answer our questions!

The book is currently published in German (any willing translators please reach out and I’ll connect you) where it received rave reviews including:

“A mammoth and soon a standard work. Timo Hoyer’s biography of Anthony Braxton is gripping and clearer than ever.” – Jazz Podium

For all non-German speakers, I hope this interview will get you curious enough to go out and dig into the amazing Anthony Braxton discography.