Fender Guitars – Everything You Need To Know About The Brand 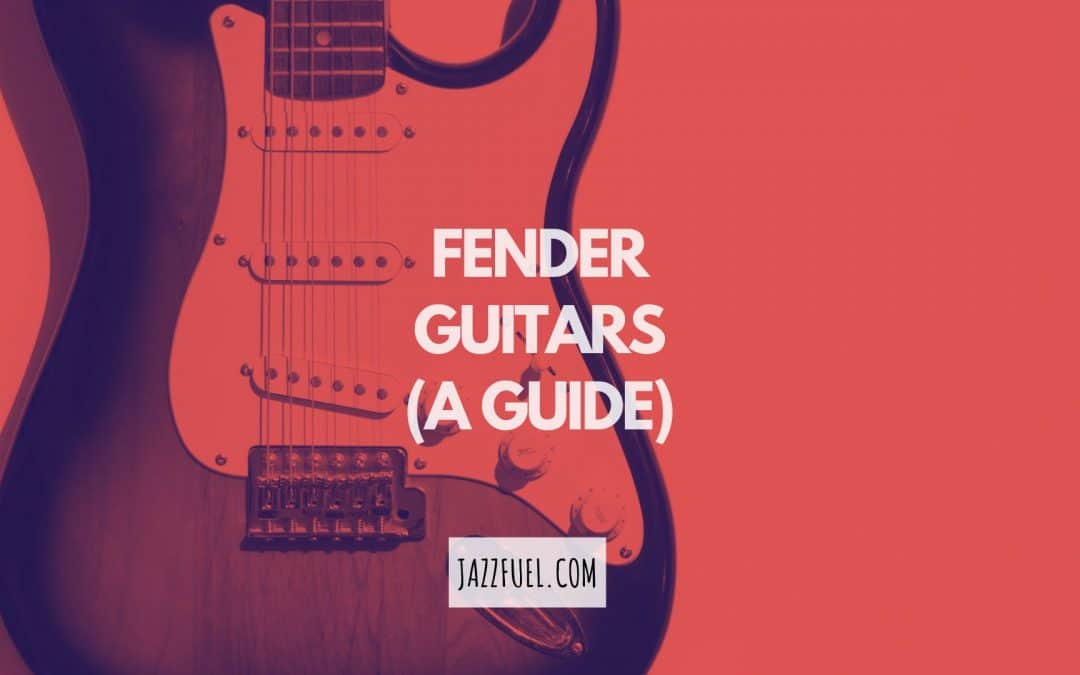 When it comes to the most popular guitar brands around the world, Fender is right up there with its long-time competitor Gibson.

Leo Fender’s innovations have been at the forefront of the guitar world for over 70 years.

And, in the process of developing guitars that could compete with Gibson’s jazz boxes, Leo Fender carved out a distinctive niche for his company in music history.

Amazingly, the Fender guitar has maintained a high level of relevance despite constant shifts in musical genres and tastes throughout the decades.

Generations of musicians has discovered the revolutionary and innovative sonic possibilities that Fender guitars offer the modern guitar player.

And, whilst most famous of their electric guitar, we’ll see how competitive they are in all types of guitars today.

The Origins of Fender Guitars

In the late 1930’s and early 40‘s, while Gibson was developing the f-hole arched top guitars that would make them a staple among jazz guitarists, Leo Fender was running a radio repair business in Fullerton, California.

Fender became involved in guitar design when local musicians asked for help amplifying their guitars through their PA systems.

By 1944, Fender was applying for a patent for his first magnetic pickups, which were being used mostly in lap steel guitars.

By 1946, Kauffman left the company and Fender renamed it Fender Manufacturing. He soon sold the radio repair end of the business to focus only on his guitar innovations.

From the beginning, Fender had been battling feedback, a constant problem for musicians playing hollow body electric guitars.

In 1950, Fender came out with the Esquire, his first solid body guitar, with a solid single-slab body, one pickup and a bolt-on neck.

Many guitarists at the time did not take solid body guitars seriously, but the Esquire’s solid body reduced feedback, allowing guitarists to play more loudly than ever before.

This was desirable because, in the 1950’s, popular music was playing to larger audiences than ever before.

The Fender Broadcaster and Fender Telecaster

After the Esquire, in 1951, Leo came out with a similar solid body, this time with two single coil pickups called the Broadcaster.

Fender soon changed the name to the Telecaster. Featuring a single cutaway solid body with two single coil pickups and a bolt-on neck, the Telecaster offered a more versatile sonic palette than the Esquire.

With its bridge pickup activated, one could get bright twangy sounds that were particularly suited to country music and Rock and Roll music.

With its neck pickup, one could get a bossier, smoother tone reminiscent of a Les Paul. The Telecaster was also quite a bit lighter than the Les Paul. Jazz great Bill Frisell often weaves his melodic magic on a Telecaster.

The Telecaster continues to be a big seller to this day and is available in many versions including a semi-hollow version, as well as versions with humbucking and P-90 pickups, giving these versions a weightier sound more suited to jazz.

In 1954, Leo Fender changed the guitar universe forever when he introduced the Stratocaster.

As its name suggested, there was something space age about this guitar design. The thin and sleekly contoured body and relative light weight and its versatile sound lent it to a variety of musical genres.

However, Rock and Blues players especially loved this guitar, specifically for the wide sonic palette it offered to players.

Featuring three single coil pickups with a 5-way selector switch, the Fender Strat allows players to blend pickup voicings in a variety of ways. Whether you’re looking a chimey twang to scorching hot lead tones, the Strat can give you what you are looking for.

It’s almost impossible to imagine electric blues without the Stratocaster. So many notable blues guitarists have played Stratocasters over the years, including Buddy Guy, Stevie Ray Vaughn, and Eric Johnson.

Today, great fusion players like Andy Summers and Scott Henderson have taken advantage of the Stratocaster’s sonic versatility to create some of the most memorable music in recent years.

However, the brightness of the Stratocaster’s tone did not lend itself to traditional jazz, so Fender sought, with subsequent models, to attract the interest of traditional jazz players.

While Fender is known best for innovations in solid-body electric guitars, they did seek to lure jazz players away from Gibson by bringing out several hollow and semi-hollow models.

Many of these guitars were released in the late 1960‘s through the 80‘s, and recently reissued, like the Fender Coronado in the late 60‘s, the Starcaster in the 1970’s and the Fender D’Aquisto in the 1980‘s.

The Fender Coronado was introduced in 1965 and was a traditional f-hole archtop hollow body with a bolt-on neck and rosewood fingerboard.

One of the unique features of all versions of the Coronado was a distinctive headstock which was shaped exactly like a Stratocaster’s headstock.

The Fender Starcaster came onto the market in 1976 and was discontinued in 1982. It was was another unsuccessful attempt by Fender to compete with Gibson’s ES series hollow body guitars.

Its most distinctive feature was its rounded headstock shape, which was a 6 in-line configuration. Today, the Starcaster has been reissued by Fender and appears on several of Radiohead’s classic tracks, particularly the song “Optimistic.”

Most of the Fender hollow body guitars were discontinued soon after hitting the market because they did not compete well with Gibson ES series guitars.

Today you can find them on the vintage guitar market. Being rare, they are quite collectable.

The Fender Jazzmaster was meant to be a solid body alternative to the big jazz-box style guitars that were most commonly used in jazz.

It’s ironic that the upscale guitar that Fender designed for jazz guitar players never actually caught on with its intended audience, but became the inspiration for an entirely new sub-genre of music – the Surf Sound.

The Jazzmaster was chunkier and darker sounding than the Stratocaster, but offered jazz players sleek, futuristic styling and a unique fulcrum tremolo system.

Released in the late 50‘s, the Jazzmaster never really resonated with jazz players, despite the fact that it had a much bassier and more mellow sound than either a Telecaster or a Stratocaster.

The Jazzmaster featured revolutionary new single coil pickups that are often confused with Gibson’s p-90 pickups because they looked similar.

However, the Jazzmaster pickups were specially designed single coils that featured reverse winding, which gave them a thicker sound and hum-canceling capabilities when the pickup selector was in the middle position.

The Jazzmaster also featured a newly designed locking tremolo with an unusually long vibrato bar, and a 21-fret bolt-on neck with the same specs as a Stratocaster’s neck, sporting the same shaped headstock.

The Precision and Jazz Basses

Where Fender has made its biggest impact in Jazz is in the bass market.

Released in 1951, Fender’s Precision Bass, or P-Bass as it is called by musicians, became the first mass produced electric bass guitar on the market.

With its booming tone and precise intonation, the P-Bass was an enormous success, knocking most acoustic basses out of the musical arena in a matter of a few years.

However, Leo was not done.

In 1960, Fender released the Jazz Bass, a deluxe version of the P-Bass that Fender joked would be like comparing a Chevy to a Ferrari.

Like the Jazzmaster, the Jazz Bass was an offset instrument, made for comfort and playability. The offset body was also slightly larger, giving the Jazz bass a mightier tone. It also sported a slimmer neck that improved playability.

The great Jaco Pastorius is among the most notable jazz greats to play a Fender Jazz Bass. Other notable Jazz Bass players include Stu Hamm, Marcus Miller (who used it in Miles Davis’ band), Sting from the Police and Flea from the Red-Hot Chili Peppers.

However, today, it’s possible to get all of Fender’s most iconic guitars in solid body or semi-hollow versions, with single coil, humbucker, and P-90 pickups, making it possible for jazz players to get the tone they want while enjoying the benefits of Fender guitars, which has traditionally been in comfort and playability.

Today, the ‘Gibson or Fender’ debate has become ‘both Fender, Gibson and others’ as most jazz and fusion players are following the example of fusion great Larry Carlton of Steely Dan, who plays a Fender Stratocaster, Telecaster, as well as a Gibson 335 and Les Paul.

Other fusion greats like Scott Henderson, Andy Summers and Bill Frisell have also played Fender guitars over the years.