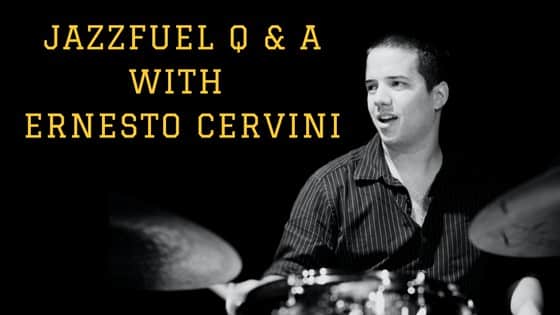 I’ve noticed a strange phenomenon in the jazz world recently: there are people out there – both musicians and ‘industry’ – who seem to find extra hours in every day that no one else, myself included, know about.

Today’s Q&A guest – Ernesto Cervini – is certainly one of those.

The Toronto-based jazz drummer originally graduated as a classical pianist and clarinettist from Canada’s Royal Conservatory of Music before moving to New York to study at the Manhattan School of Music.

The group he co-leads, Myriad3, was nominated for a Juno Award, hailed by Jazztimes as “Canada’s answer to groups such as The Bad Plus and E.S.T” and named Jazz Group of The Year.

Alongside this work as a jazz musician, which has included tours he’s booked across Europe and Asia, Ernesto runs a PR agency called Orange Grove which works with an enormous bunch of North American jazz talent.

I know a lot of jazz musicians – from young graduates through to seasoned pros – have to take care of so many aspects of their career themselves if they want things to happen. As such, I thought Ernesto’s experience as both an internationally touring jazz musician and a seasoned PR person would be valuable insight to you guys…

You can read Ernesto’s answers in full below, but a few key highlights to takeaway:

How do you manage being involved with multiple projects from the point of view of trying to get as much as possible out of each?

As I get older, I’m learning that you can only do so much at once.

With the multiple bands I’m involved with, I try and space out any touring so that I’m not on the road, and away from my family (I have 2 young children) for too long at any one time.  I’ve also learned about patience.

I have a great trio that I’ve been playing with for the past couple of year (featuring Luis Deniz on Alto Saxophone and Rich Brown on Electric Bass).

It’s great fun playing with these incredible musicians, and I’m excited to record an album with them, but at the same time, I’d like to give the music a chance to grow and really evolve before we record.

We are all busy with many other projects, so my plan is to keep playing, and when the music feels like it’s found it’s full potential, then we will go into the studio to record.

You’ve toured quite a bit in Europe, especially with Myriad3. Did you book these shows yourself and, if so, what’s your #1 tip for other musicians trying to do this?

I do book all these tours myself.

My #1 tip is actually 2 things…patience and persistence.

Venue bookers and promoters are inundated with e-mails every day, so try to keep it short and simple and very, very easy to navigate.  And don’t give up!

The artwork on the Myriad3 records looks great. Have you noticed these sort of photos getting used more by promoters and journalists compared to more standard band photos?

In Myriad3, we have worked hard to develop an artistic vibe that matches the music we play.  We’ve been working with a wonderful photographer and artist named Monika Traikov for all 3 of our albums, and we are thrilled with the work she has done.

I feel like when promoters and journalists use our photos, it’s a great representation of the music we play.

You showcased at Jazzahead with Myriad3. Did you see any direct results in terms of gigs and what advice would you give other bands showcasing here?

Playing at Jazzahead was a wonderful opportunity for a number of reasons.  First off, you get great video of your live performance, which is so important.  It isn’t easy to get a live, multi-camera concert in front of hundreds of people set up.

We send our Jazzahead video out with all of our promotional materials.  This helped open many doors in Europe (as most presenters are aware of Jazzahead, and the caliber of musicians they usually showcase).

I was working on a new tour just after we showcased, and we were able to secure some really great gigs, including performing at Ronnie Scott’s in London for the International Piano Trio Festival. 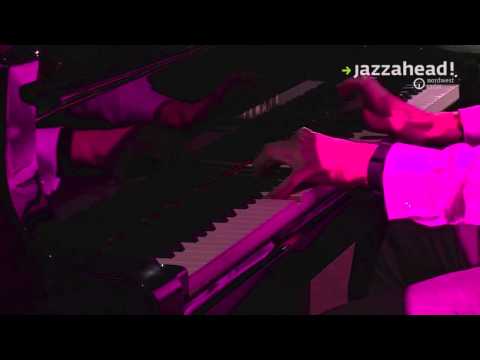 The Myriad3 group seems very much like a team effort. Do you divide up the different ‘non-music’ chores and, if so, what does that look like?

Yes, absolutely.  That is a wonderful collective project, and because we all pitch in, it remains a collective effort in every facet.

I do most of the tour booking (outside of Canada), Chris Donnelly (the pianist) does the tour booking within Canada and the grant writing, and Dan Fortin (the bassist) is in charge of our social media presence, and also coordinating the visual design for the band (photography, album art, video, etc).

All of our composing and arranging is also a collective effort, so we really embody that idea in every facet of our existence.  It can be tough when we don’t agree on things, but with three people, there’s always a tie-breaker, and we have worked really hard to continue pursuing a collective vision for the band both musically and professionally.

You also work as a publicist; do you think about stories and ‘angles’ when putting together your own albums, or only once the music is finished?

I think having a story or ‘angle’ is a great advantage that you can give a project or album.  As a publicist, I always encourage my clients to share their story with me, but by the time I get involved the album is generally already recorded, etc.

I think a good ‘angle’ can really help an album get noticed, as long as the music is good and the angle is honest.  That being said, in my experience great music beats a great story any day of the week.

With my current projects, I have yet to plan an album that was based on a story or theme.  I’d like to, but the right inspiration hasn’t come yet.  I will be recording a new album with my sextet Turboprop in mid-December, and it will be a collection of great standards and some covers (Radiohead, Blind Melon) as well as some originals.  I tried to work an ‘angle’ into the collection of music, but it felt forced.

To get international recognition I think it’s important to, beyond obviously presenting great music, invest your time and effort into establishing a following outside of your country.

This involves having a great email list, or some other subscriber-based program to help you keep in touch with audiences outside of your immediate area.

This also includes touring on a semi-regular basis, and having a great online presence through your website, social media and whatever else fits your “brand”.

How much does social media help you in winning new fans and audiences with your projects?

What a perfect segue (I didn’t read ahead, I promise!)

Social media is an incredibly powerful tool nowadays.  Having a strong web presence can help to keep your music and your activities in the public eye, without necessarily shoving it down people’s throats.  I work very hard on maintaining a strong email newsletter, and I find this helps immensely, as I have people coming out to my gigs all the time that say they get my newsletter and come because of it.

I also try and stay active on Facebook and Twitter, but I like to keep things casual, and post about personal stuff as well as my career, to keep things balanced (much to my wife’s chagrin).

What do you look for – aside from great music – in the bands you work with as a publicist?

To be honest, I base my decisions solely on the music.

It needs to be great music that fits the vibe of my company, Orange Grove Publicity.  I’ve worked with many different styles of jazz already, but the one thing all of my clients have in common is that they are great musicians.  My experience so far has been that great music has a tendency to sell itself!

You’ve worked as a sidemen with some pretty big names. Did you find that helped the profile of your own projects too, or not so much?

I think it’s all part of the puzzle.

The more you can get out and perform, the better. I love being a band-leader (or co-leader) but it’s also great to be a sideman, and lend your voice and talents to other projects.

Of course, it’s always great to work with some bigger names, as that will help raise your profile!

Hope the rest of you found a few useful bits in there to think about for your own project. Feel free to post any questions relating to this Q&A in the comments section…

Drummer-composer Ernesto Cervini is making a name for himself as a consummate bandleader and in-demand collaborator, praised for his deep musicality and infectious energy.

Downbeat described his fluid style as one that “exemplifies ‘float like a butterfly, sting like a bee’.” Modern Drummer said: “Cervini recalls such old-schoolers as Art Blakey and Billy Higgins… It’s his robust, magnetic personality that fascinates consistently.”

After releasing three quartet discs, Cervini made his latest venture a sextet album, with Turboprop released by Anzic Records in 2015. The Ottawa Citizen said: “With his fourth disc, Cervini has strikingly raised his game… With its fetching writing for horns, palpable sense of team spirit, highly focused solos and varied emotional depths, Turboprop is full of jazz pleasures.”

He is also a member of Myriad3, alongside keyboardist Chris Donnelly and bassist Dan Fortin. JazzTimes called the collaborative trio “Canada’s answer to groups such as The Bad Plus and E.S.T, bearing a similar open-minded perspective and unpredictability.”

Myriad3’s second album, The Where, was nominated for a Juno Award (Canada’s Grammy); and the band was also nominated for an Indie Music Award (presented by Sirius/XM Radio) for 2014 Jazz Group of the Year in Canada.