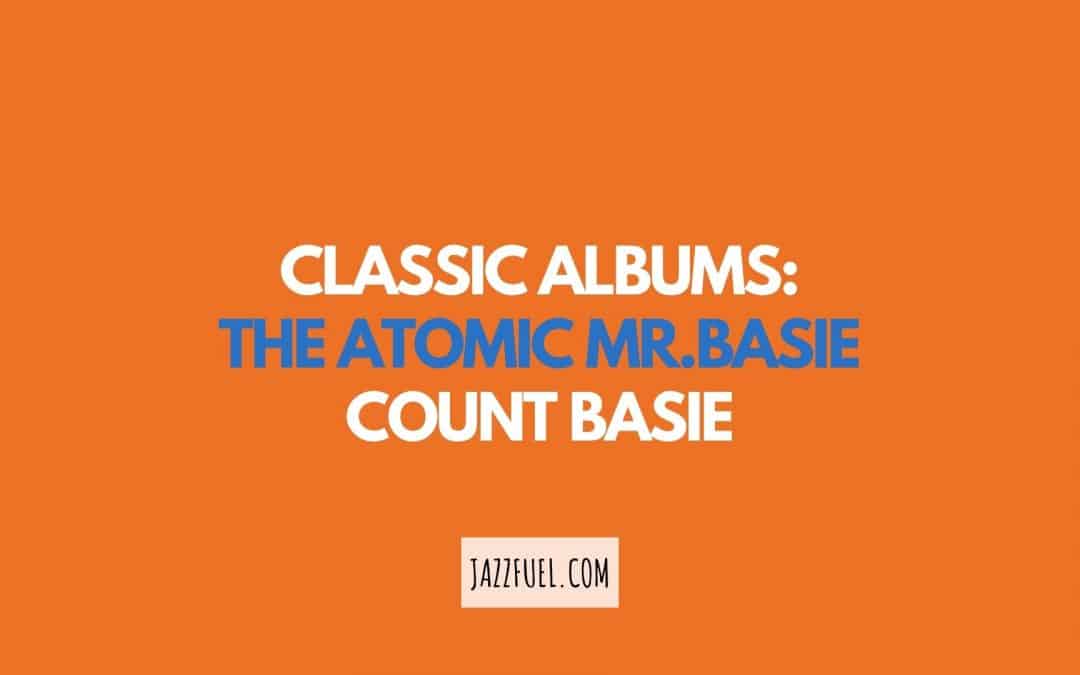 In a career full of highlights, legendary jazz pianist and bandleader Count Basie had, arguably, his biggest hit with the 1957 release The Atomic Mr Basie.

In this article, British jazz journalist Nick Lea dives into the story.

As is often the case, the makings of a great jazz album starts well before the recording session.

In fact, to fully understand how they arrived at that place back in 1957, it helps to know a bit more about the artist first…

Forever known as The Kid From Red Bank, William “Count” Basie was born in the suburb of Red Bank, New Jersey on 21st August 1904.

Both parents were musical, but it was his mother who was a keen pianist that gave Basie his first piano lessons.

Whilst he took naturally to the piano, the young Basie also liked to play drums, but in his early teams deferred to the superior playing of Sonny Greer, who also lived in Red Bank and would go on to become Duke Ellington’s drummer.

Now having decided to focus all his energies on the piano, Basie looked to spread his wings spending most of the 1920’s in Harlem.

He worked at various clubs in the area and also learned to play the organ, taking lessons with none other than Fats Waller, and soon found himself working in the theatres providing accompaniment to the acts and improvising soundtracks to silent movies.

Towards the end of the decade, he found himself playing with Walter Page’s Blue Devils and in 1929 with Bennie Moten’s Band based in Kansas City.

The band would attract some star players including Ben Webster on tenor saxophone. Discontent within the Moten band saw the leader voted out and Basie took the helm for a short time, and the band became known as Count Basie and his Cherry Blossoms.

When the band folded he joined Bennie Moten’s new band staying with the band until the leader’s death in 1935.

It was Moten’s untimely death that was the break that Basie was waiting, and now ready, for.

Impossible to keep Moten’s band together, Basie formed his own aggregation known as the Barons of Rhythm, and it was this band who while fulfilling an engagement at the Reno Club the band started jamming, and the results would become Basie’s signature tune, ‘One O’Clock Jump’.

The band began to establish a reputation for punchy head arrangements and top soloists, and the band boasted both Hershal Evans and Lester Young on tenor saxophones at a time when it was usual for a big band to us only one tenor sax.

However, this arrangement was not without its problems as Young and Evans had completely different sounds and Young would complain about Evans’ use of vibrato.

To remedy the problem Basie separated them, placing the two tenors either side of the alto players setting a precedent that other big bands would later adopt.

Another vital event that would occur in 1936 was the invitation from record producer John Hammond.

The results of the sessions recorded under the name of Jones-Smith Incorporated, and the band recorded four classic sides, ‘Shoe Shine Boy’, ‘Oh Lady Be Good’, ‘Boogie Woogie’ and ‘Evening”‘ which were the earliest recordings of Lester Young.

At this point Basie’s band was featuring the most important soloists of the day in Earle Warren (alto sax), Lester Young and Hershal Evans (tenor sax).

The Count’s love of the blues would also find such notable singers as Big Joe Turner, Jimmy Rushing, Helen Hume and Billie Holiday performing with the band.

With his Big Band now firmly established Basie’s career was looking secure, and having found his style and sound for the band hi success was guaranteed in the 1940’s.

However, after the war the big bands saw a decline as the new music called bebop took hold. Basie would often incorporate bebop into the band’s arrangements as long as they did not disrupt the beat, but inevitably as the big bands found less work he was forced disband an play in smaller combos.

The fortunes of the big bands would change in the early fifties and Basie reformed a sixteen-piece band.

Count Basie was back, and as always with a raft of top notch soloists including tenorist Paul Quinchette, trumpeters Joe Newman and Tommy Turrentine, and on alto Marshal Royall and Ernie Wilkins.

He would continue to rehearse his rhythm section separately from the rest of the band, honing the four-man team to a precision machine.

Guitarist Freddie Green was central to the Basie sound. Never wishing to solo but content to play rhythm guitar for Basie for fifty years.

In October 1957, Basie and his Orchestra would be back in the studio for a recording for the Roulette imprint that would once again raise the pianist’s stature.

Originally released as simply Basie, and also known as E = mc² the album caused quite a stir. Eleven new tracks written and arranged by Neal Hefti gave notice that big bands could still play a vital role in the music of the day, and still swing hard.

With its striking cover image of the huge mushroom cloud, the album was soon renamed as The Atomic Mr.Basie.

Atomic is an accurate description as the bands explosive entry kicks off ‘The Kid From Red Bank‘, and Basie’s economical (to the say the least) solo.

Can anyone else be so readily identifiable and say so much with so few notes?

His solo encompasses so much from Boogie-woogie piano, to stride and swing in a single solo that defines the composition.

This is immediately followed by ‘Duet’ that features the muted trumpets of Joe Newman and Thad Jones with growls and smears to manipulate the sound of the horn.

The gentle side of the Orchestra is heard on ‘After Supper’ with its beautifully scored opening statement with muted trumpet aside heard faintly behind the ensemble.

“Lockjaw” Davis takes a brief and full toned solo before Basie plays another of his ‘”less is more” solos that, as always, make the ears prick up.

‘Flight Of The Foo Birds‘ once again picks up the tempo with fine solos from Thad Jones on trumpet and another fantastic outing from “Lockjaw” who is also star soloist on ‘Double-O’ with a barnstorming outing.

Basie and the rhythm section kick off a swinging ‘Fantail with some excellent ensemble playing that builds up the tension to be  be relieved by Frank Wess’ boppish alto solo.

The piece is then driven relentlessly towards its climax with an almost typical big band fanfare to close.

Arranger Neal Hefti certainly knew had to arrange for Basie, and the freshness of his scores for the Orchestra would surprise and delight fans and critics alike.

The delicacy of the nuances he could elicit from the band can be heard to perfection on ‘Midnite Blue’, a piece scored for the ensemble and an abject lesson in big band swing.

Another exquisitely scored composition for the band was ‘Lil’ Darlin” with an exceptional muted trumpet from Wendell Gray the only departure from the big band arrangement by Hefti.

The timing of The Atomic Mr.Basie was quite exceptional.

At the time of its release jazz was being dominated by the small groups, and bandleaders such as Miles Davis, Art Blakey, and improvisers Sonny Rollins and John Coltrane that were taking the music forward at a rate of knots and looking to rewrite the rule book.

The advent of free jazz was just around the corner, but still vibrant big band music that would remind of the importance of the ability to swing at all tempos could still win the day.