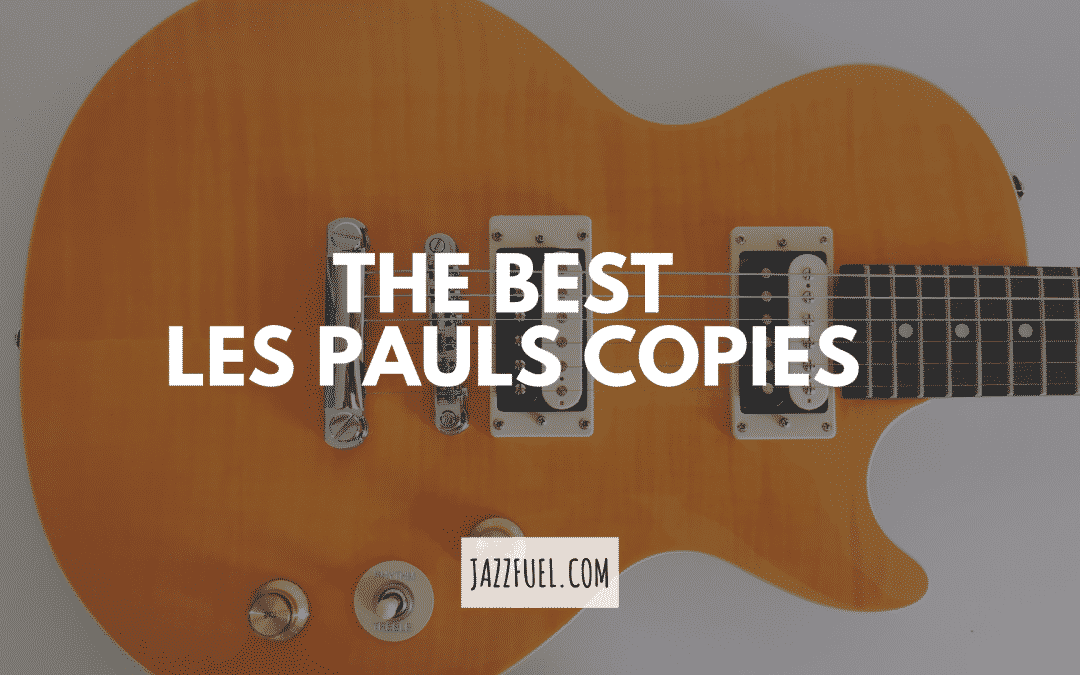 The Gibson Les Paul, the most iconic Gibson guitar. There’s no doubt as to why it is one of the most sought-after guitar models on the market, but not everyone has the cash to chuck at an original Les Paul. In this article, we’ll take a look at some of the best Les Paul copies on the market right now.

Originally designed by Lester William Polsfuss – better known as Les Paul – and first sold by Gibson in 1952, the Les Paul is a guitar that’s not going anywhere, having surpassed generations and genres as one of the most stylish and versatile guitars.

The Gibson Les Paul is perhaps most associated with heavier styles of music like rock and metal, however this popular guitar can also be well-suited to jazz. After all, Les Paul was a jazz player himself.

Before diving into all the details, we present to you our top 3 picks:

Look back into the history of jazz guitar and you’ll find a number of great guitarists who used the instrument, such as Jim Hall who was often seen playing his Gibson Les Paul Custom.

Although jazz players are traditionally drawn to the mellow tone of a semi-acoustic, hollow-bodied guitar, younger generations of jazz musicians are increasingly attracted to solid-body guitars such as the Les Paul Standard or Les Paul Classic.

Compared to other solid-bodied guitars, its tone is relatively warm which lends itself to traditional jazz, while its high frequencies allow for jazz players to dabble in more contemporary fusion genres as well.

If you have just started to learn the guitar or you’re on a budget, there are many great Les Paul copies that are worth considering instead. Take a look at the best Les Paul copies we have rounded up below.

Affordably priced, yet with an offering that boasts a Les Paul Special II LTD, 10-watt amp, guitar lead, guitar carry bag, guitar strap and branded plectrum set. Epiphone have outdone themselves with this package, which is simply everything a new guitarist needs to get started.

What we love here is the beautiful vintage sunburst finish – a Les Paul staple – and the fact that it’s made by Epiphone, Gibson’s subsidiary company.

Strapped for cash? The ILS-300 EGR, designed by Korean company IYV (manufactured in Vietnam), is a budget-friendly Gibson style guitar that you’re not going to be disappointed with for the price.

Straight out of the box, the IYV ILS-300 EGR gives you a mahogany body and neck, a half-decent jatoba fretboard and nickel strings for a guitar that you can lug around without having to worry too much about.

Japanese company ESP has been a recognizable name in the guitar industry for a while now, manufacturing a range of mid-to-high-tier electric guitars that have earned the loyalty of several high-profile guitarists, including James Hetfield and Kirk Hammett.

And it just so happens that they make some of the best Les Paul copies out there.

One of these is the ESP LTD EC-256FM, a great guitar that comes at an affordable mid-range price if you have a little extra cash to spend.

For your buck, you’re getting a mahogany body and rosewood fretboard – a bargain for what is in an LTD model – in addition to ESP LH-150 humbuckers, push-pull tone pots and LTD tuner heads that you can rely on.

It looks just as stunning as any Les Paul in dark brown sunburst, with ESP’s trademark shaping on the headstock.

This Les Paul style guitar is perhaps a little on the gimmicky side with its close resemblance to Slash’s classic Les Paul Standard.

But, for a beginner, this is a great guitar for getting started and its Slash-inspired design is quite a bit of fun.

The Epiphone Les Paul Studio LT with the classic Heritage Cherry Sunburst finish is our favourite, and we’re not arguing with the zebra-striped open coil humbuckers, either.

It’s an Epiphone, so you know what you’re getting in terms of quality and longevity, and it sits at an affordable price for both beginner players and guitarists of several years looking to add something new to their collection.

If you are looking for one of the best Les Paul copies and have some extra cash to spend, you might find just what you’re looking for in the ESP LTD EC-1000.

This Les Paul Deluxe Series ESP comes in four stunning finishes – Black, See Thru Black Cherry, Koa and Vintage Black – with gold LTD locking tuners, gold knobs, a slick rosewood fingerboard, TonePros bridge and a set of active high-gain humbuckers from pickup giants EMG. It also boasts a maple top which gives the guitar a slightly more premium feel than the other guitars on this list.

In other words, this guitar is ready to be played loud if you sway towards the heavier side of jazz-rock.

As usual with any ESP guitar, the design is given a stylistic touch on the headstock, fret markers and body with a sharper, pointier cutaway. This is a Les Paul copy that looks the real deal, but with added character.

Not everyone likes a big guitar. And while the Les Paul isn’t considered bulky, the stripped-down, smaller Les Paul Junior garnered a following among many Les Paul fans following its re-release in 2001.

The Epiphone Les Paul Special VE, another budget-friendly Les Paul copy from Gibson’s subsidiary company, is a lightweight guitar that follows in the footsteps of the Les Paul Junior in terms of its weight and design.

It also gives you the choice of three head-turning colours: ebony, vintage sunburst and cherry red.

The company also produces the Epiphone Les Paul Standard, which- as the name suggests – recreates the design and sound of the classic Gibson Les Paul Standard. It is slightly more expensive than the other Epiphones on this list but if you’re willing to spend an extra couple of hundred pounds it is an excellent alternative to the original Gibson guitar.

What Is a Les Paul Replica?

Although guitars like these are generally referred to as Les Paul copies, they are in fact replicas.

A Les Paul replica is any electric guitar that copies the design of the Gibson Les Paul, but is not manufactured by Gibson.

Is Epiphone A Real Les Paul?

While not technically real or original Les Pauls, Epiphone is a guitar company that has been owned by Gibson since 1957.

For first-time guitar buyers and those with a limited budget, Epiphone Les Pauls, and other Epiphone guitar models, are cheaper alternatives to buying Gibson guitars.

We hope you found this article helpful in your search for the best Les Paul copies. Got a question? Let us know in the comments!

Looking for more guides to the best electric guitar gear? Check out our articles on the best guitar pedals for Jazz and the best clip on tuners for guitar.