10 of The Best Buddy Rich Albums in Jazz History

Hailed by drummers of all creeds to be the greatest drummer of all time, Buddy Rich continues to inspire and influence new generations of musicians and listeners to this day. Join us as we take a trip through some of the best Buddy Rich albums and recordings.

The American jazz drummer, Bernard ‘Buddy’ Rich began playing at the tender age of two in his parents’ touring vaudeville act and was naturally gifted with a prodigious technique.

After a childhood of performing Rich broke into the jazz world in the late ’30s by working with Artie Shaw and Tommy Dorsey. In the mid-’40s he formed his own big band to rival other drummer-bandleaders of the time such as Gene Krupa.

This wasn’t Krupa’s only influence on Buddy. The younger musician set up his instrument in much the same way as the man he idolised, with Swing-era hallmarks such as a large bass drum and splash cymbal.

Rich’s set-up and indeed style of playing did not change much over the years, remaining rooted in the ’30s.

In 1966 Buddy Rich formed a new ensemble and used arrangers who could use the band to showcase his technical fireworks.

His style of drumming was characterised by playing along with a lot of the melodies, as opposed to playing around them and using unison in moderation. This forced the other musicians to play their parts like a drummer, a unique if controversial approach.

Until his death in 1987 Rich continued to tour and record with his big band, inspiring and influencing his peers as much as the next generation.

Immortalised by a voluminous recording catalogue, we’ve chosen ten of the best tracks from the Buddy Rich discography which tell his story.

Buddy Rich rose to fame when he joined Tommy Dorsey and His Orchestra in 1939. This single from 1940 features an approach he would come to be known for best: soloing is in the rudimental style, and single-stroke rolls are clean and fast.

His timekeeping is predominantly on the snare drum, moving to a closed hi-hat only to accompany Jimmy Dorsey’s clarinet solo. This suggests an allegiance more with the tradition of Gene Krupa and Chick Webb than the more modern legato cymbal playing of Jo Jones and Sid Catlett.

A contrasting sequel was recorded two years later and shows Buddy in an entirely different light. This is a tom-tom solo in the jungle fashion, but incredibly Rich manages to step out of Gene Krupa’s long shadow in this genre and make it his own.

Although technical proficiency is inescapably in the foreground, Rich exhibits a wide range of colours and timbres and uses the different tom-tom pitches to play melodically

This impromptu session is with fellow Swing aficionados Nat Cole and Charlie Shavers. Buddy Rich can be heard shouting throughout, which only adds to the excitement and energy coming out of the music.

One of the primary roles of the drummer in a jazz ensemble is to create a bespoke accompaniment for each soloist, providing contrast and highlighting each instrument’s best attributes. Rich gives us a masterclass in hi-hat playing, adjusting how open or closed the cymbals are to change the texture and timbre of the music

Broadcast from a concert at a naval air station with his own band, this number puts Buddy Rich’s drums front and centre with unison rhythms between the horns and toms as well as plenty of space for fills.

The dexterity, speed and clarity are undeniable in this example, and the listener will hear Rich taking the reigns by shouting count-ins to his ensemble. 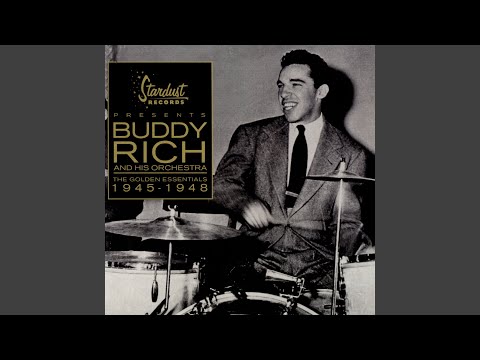 This short track has Buddy Rich move into the modern era as one of a few collaborations with Charlie Parker around 1950. The recording quality is clean, and we can hear the internal dynamics of the drums clearly.

While Buddy Rich is widely known for his drumming gymnastics, this recording with Lester Young and Nat Cole demonstrates a more collaborative approach. In addition, he plays exquisitely with brushes throughout.

The concept for this track is interplay, a three-way conversation in which each musician has an equal opportunity to contribute. Rich’s solo here is possibly his most tasteful, as he goes beyond a rudimental exhibition of rhythm and plays melodies as if he were another horn player.

This is one of the first Buddy Rich albums where he features as a co-leader and is one of several albums in the ’50s marketed as contests between himself and another jazz drummer. More likely the idea of a record producer than a musician, these documents do nonetheless yield some interesting results.

Principally, they are a useful way to compare styles. The older Gene Krupa is looser than Rich here, his beat is wider and his drums ring more freely. Buddy on the other hand is virtuosic in his tidy stick work and does not shy away from acrobatics. Who ‘won’ depends on the listener’s criteria and palate. 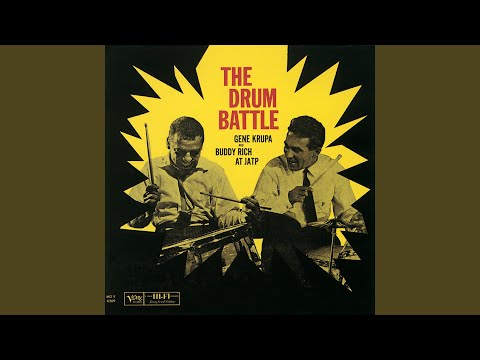 This Buddy Rich album, an announcement of his new ensemble, is the first in Buddy Rich’s final musical chapter. From then on, he was known chiefly as a bandleader and used the group as a platform for his drumming.

The arrangement keeps the live audience guessing with numerous tempo changes and extreme dynamics, and theatrical moments such as a dangerous two bars of silence followed by a tutti downbeat which must have been nerve-racking for the musicians!

‘Mercy Mercy’ is regarded as one of the best Buddy Rich albums. Like ‘West Side Story Medley’, this is another showcase for Buddy Rich’s talents, another live recording and another heavily arranged selection of tunes culminating in an open drum solo near the end.

More modern influences are however present here, with some time-signature changes and rock and bossa styles. Over the next few years, the repertoire would reflect the changing trends and have as much backbeat and swing in the mix.

A case in point, this chart blurs the lines between Latin, funk and swing styles. Nevertheless, Buddy Rich’s playing suits this and the result is a big groovy melting pot.

Subsequent albums of Buddy Rich and his band illustrate a quality control often found lacking in a musician’s later career. Up until his death, Buddy was playing as well if not better than ever, a sign of integrity born of an unrelenting work ethic and self-respect.

We hope you enjoyed this rundown of our top ten Buddy Rich albums and recordings. If you want to continue your exploration of Buddy Rich’s discography, check out some of his incredible features with the likes of Count Basie, Benny Carter and Harry James with whom he played as a sideman throughout the 50s and 60s.

Want to learn more about jazz music’s best drummers? Visit our Drums Section or check out our recent article on the Best Modern Jazz Drummers.