The Different Parts of the Piano | A Beginner’s Guide 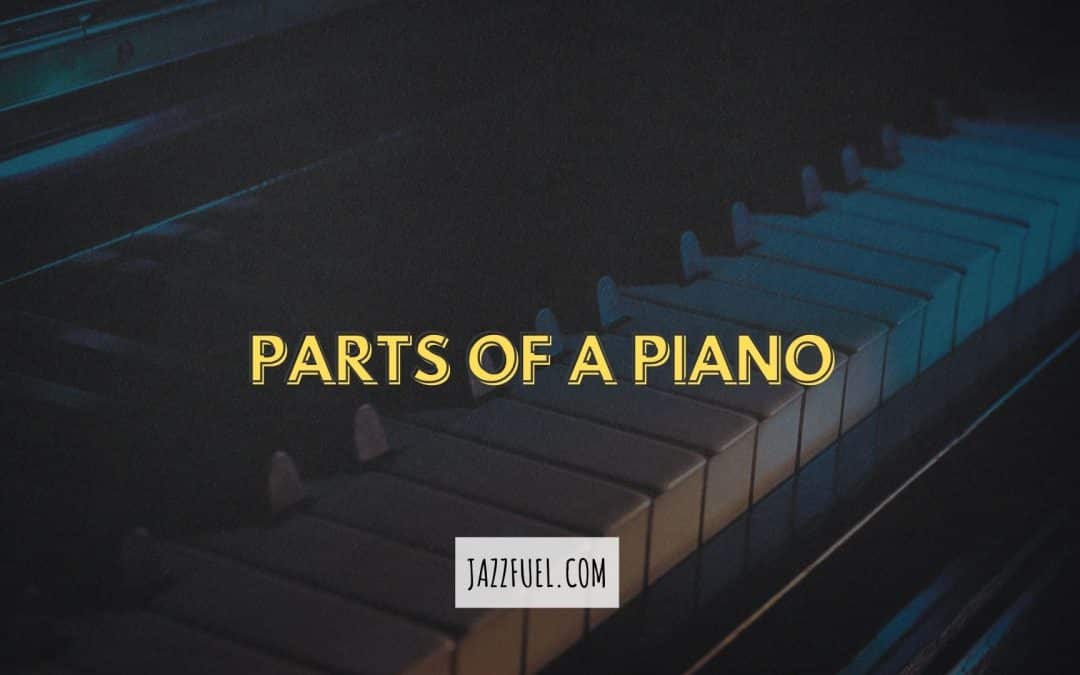 In this article, we’re taking a look at the different parts of the piano and how these elements work together to create the rich and full sound that we’re all familiar with.

From the keys to the interior mechanics, we’ll be taking a tour through the instrument and explaining how it all functions.

Although it’s not essential to know how a piano works before learning to play the instrument, it is definitely helpful to know the different parts of the piano and how the mechanisms create and alter the overall sound.

Unlike digital pianos which create sound electronically, an acoustic piano uses a series of mechanisms including keys, piano strings, hammer shanks and more to produce and amplify vibrations. While it is easy to tune a guitar or violin without any assistance, pianos – thanks to their relative complexity – usually require a specialist piano technician to keep the instrument in shape.

Whether you play an upright piano or a grand piano, the instrument is generally made up of the same components which were invented by Bartolomeo Cristofori in the early 1700s.

Read on to learn more about the main elements of the instrument and how they affect the sound you produce.

Parts of the Piano

The outer rim of the piano gives the instrument its familiar shape. It’s typically made from wood such as beech or maple and cut to fit the soundboard. We’ll talk about what the soundboard is and what it does later on.

Vertical pianos are a little different to grand pianos in the sense that their frames are cut as rectangular prisms.

Either way, the piano has a lid that closes on top of the soundboard and strings. This can be opened or closed during performances to regulate the volume and timbre of the instrument. It also allows for easy access to the tuning knobs.

Next is the inner frame.

This is made from a heavy cast iron plate and supports the soundboard. It contains the agraffes which keep your instrument’s strings spaced properly. Some people call them brass guide screws; either way, this part is a crucial part of every piano.

Now let’s discuss the soundboard. The soundboard is a wood surface over which the strings in your piano vibrate. In this way, the piano is quite similar to stringed instruments like the guitar and cello.

They produce sound under the same general principle, though instead of the strings being strummed they are hit with what is known as a hammer shank. For this reason, pianos are classed as both stringed and percussive instruments.

Higher-end piano soundboards are typically made from a type of wood like Sitka spruce. Cheaper versions use plywood. Both are good options but have different qualities.

This is the part of the piano that we’re all familiar with. The keyboard is a collective name for the white and black keys. The 52 white keys are called naturals, while the 36 black keys are known as sharps and flats.

These 88 keys are contained within a keyframe that rests on a key bed. This system is hidden by the key slip which runs across the front of the instrument.

Keys on a modern piano are usually made from plastic. But older instruments used ivory. This has become less common as elephant poaching has become increasingly regulated and moral values have changed.

The piano action is a series of levers. Each connect a piano key to a hammer. These hammers strike the piano strings, which are then amplified by the soundboard.

You can control the volume and tone of the sound by changing the force with which you strike the key, which in turn alters the hammer action. In other words, if you hit a key hard, you’ll produce a different sound than if you were to hit it gently.

This separates the piano from the harpsichord, an earlier keyboard instrument that plucks the strings instead of striking them.

Piano strings are made of tightly wound steel wire that is connected to a tuning pin on one side and a hitch pin on the other. Each note has three strings which are struck by the hammer to create sound.

Depending on how they’re struck by the piano action, their vibration changes.

Guitars are tuned by turning knobs on the headstock. Similarly, a piano string is tuned by twisting the tuning knobs. This action tightens or loosens the strings depending on the direction you turn them in.

Dampers are essentially wooden blocks with felt pads. You’ve probably used or heard of felt pads in the context of moving furniture, but they’re also an important part of the piano.

They rest on top of a piano’s strings to prevent the note from sustaining for too long after it is struck. Higher treble strings don’t have dampers as the sound naturally dies out.

Most pianos have three pedals, though some have just two.

The left pedal is called the soft pedal or the una corda pedal if you’re being traditional.

It moves the keyboard action slightly right, which means the hammer shank hits only one string instead of all three. This of course creates a softer, quieter sound.

The right pedal goes by a few names, including the sustain pedal, the damper pedal, and the sustaining pedal. It lifts the dampers from all the strings, which creates a resonant sustained sound and helps players create a smooth and rich timbre.

The mechanism for this is very simple: the dampers are moved away from the strings, so there isn’t anything to keep them in place. So the vibrations continue for longer.

The middle pedal sustains notes only when activated. In other words, it allows players to sustain some notes while others are dampened.

In addition to improving your performance, maintaining your piano will also become easier. Once you know what each part is for and how it works, you may be able to diagnose issues for yourself.

Just getting started with the piano and looking for inspiration? Check out our list of the best jazz piano solos of all time or learn about one of the legends of jazz piano, Duke Ellington.