What are the Different Parts of a Guitar? 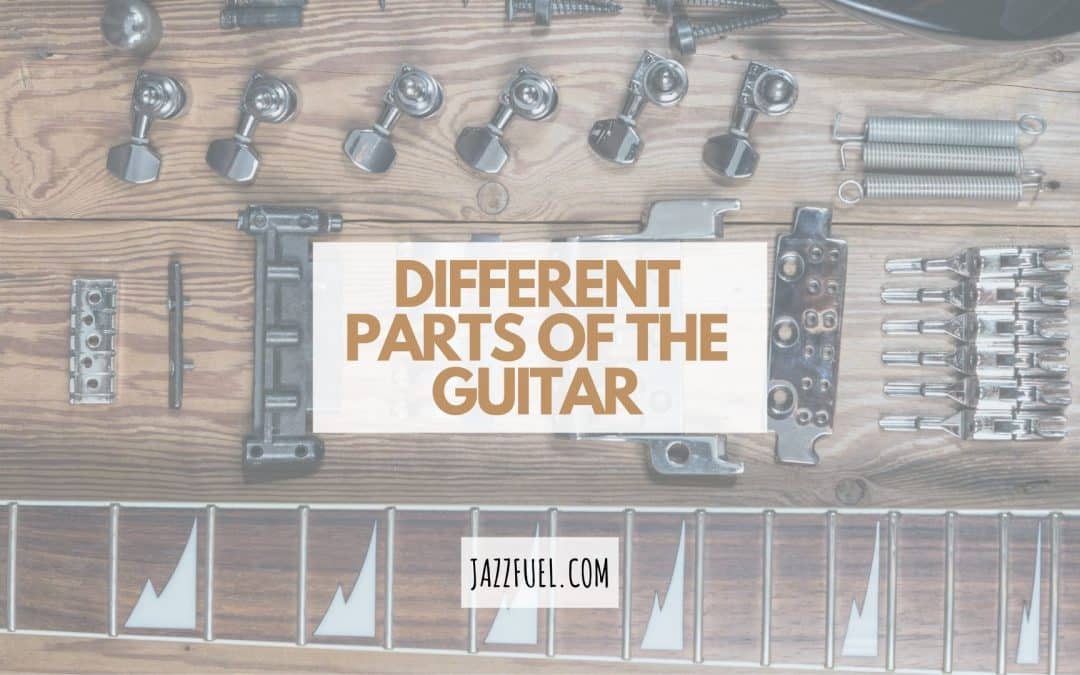 Whether you’re a seasoned player or a beginner buying their first guitar, you need to be familiar with the different parts of a guitar. Each part affects the volume, tone, and comfort of the instrument and influences the experience of playing it. In this article, we’ll be unpacking the different elements of the instrument and the role they play in producing the final sound.

To make your learning process simpler, we’ve broken down everything there is to know about the different parts of a guitar. This simple guide will make your guitar learning journey a whole lot easier.

Read on as we take a dive into guitar anatomy with a focus on acoustic instruments.

Differences Between Electronic And Acoustic Guitars

There are quite a few differences between electric and acoustic guitars, but almost all the parts are present on both. There are a few exceptions, though.

The electric guitar has pickups, a pickup selector switch, volume/tone controls, a vibrato or whammy bar (also referred to as a tremolo arm), and an output jack. Acoustic guitars won’t have any of these features. However, only acoustic guitars have a saddle and soundhole.

The Parts Of A Guitar

This separation is important because you don’t really need to know about a guitar pickup unless you’re getting an electric guitar. Similarly, you only need to understand the significance of a soundhole if you’re purchasing an acoustic guitar.

All Types Of Guitars

First, let’s look at the basic parts of a guitar that are present in all the sub-types of guitars.

The body is the main part of any guitar. It’s always hollow in acoustic guitars but can be hollow, semi-hollow, or solid in electric guitars.

In acoustic guitars, the soundboard is the largest part of the body. It vibrates to produce sound, which is why a lot of people appreciate tonewoods. The back and sides also affect your guitar’s tone. Bouts extend across the width of a guitar. There is a lower bout and an upper bout, the former being a fraction larger than the latter.

Across acoustic and electric guitars, there are several different body styles. Some have cutaways while others don’t. Generally, acoustic guitars with a large box produce a large sound. And small boxes produce small sounds.

Necks have different shapes. They can be anything from a C to a V. The rigidity of the neck determines the guitar’s quality. However, this doesn’t mean bending is a bad thing. Some rock and blues artists bend their instrument’s necks just a little to change the pitch of a note.

So if you know how to use it properly, a slight bend can be a good thing. It can help you replicate the style of some of the greatest guitarists of all time and it’s a great way to stand out in a crowd. However, if you’re a beginner, this may not be the most important feature for you to get your hands on.

The next part of a guitar is its fretboard. Some people call it a fingerboard, but its purpose is the same either way. The number of guitar strings on the board depends on the guitar you’re getting. Most boards are made of rosewood and maple.

The raised lines that run perpendicular to your guitar’s strings on the neck are called fretbars and the space in between is known as a fret. When you press a string on the fretboard, you’re essentially shortening it. Hence, the note that’s produced changes.

Fretbars are available in different shapes and types and deteriorate over time. So keeping them clean and staying on top of maintenance is super important.

Some guitars have decorative designs instead of dots. But even then, the marked frets are very easy to identify.

It’s important to take position markers into consideration when buying a guitar because they make it easier to change chords and especially come in handy when playing fingerstyle. You can figure out what area to press without having to count each time. This is a huge time saver.

The headstock is the bar at the end of your guitar’s neck where you’ll find a number of knobs. These are called tuning pegs and are used to tune your guitar. Given the importance of having a tuned guitar, a solid headstock is crucial to playing this instrument well.

Connecting the neck to the headstock is the nut, a slotted piece of plastic or wood. It defines when the playable part of a string starts.

A strap button, as the name indicates, is where you attach a guitar strap too, and so it’s crucial for performers who have to stand while playing the guitar.

The bridge supports your guitar’s strings and moves their vibration to the soundboard. The strings, on their own, produce very little sound. This is because they’re very thin and can only move a small volume of air particles.

The bridge amplifies the strings’ vibrations and produces a strong sound.

The guitar strings are, of course, what produces the sound. The type of guitar string that can be used varies. Nylon strings are commonly found on classical guitars whereas steel strings tend to be used on electric guitars and modern acoustic guitars.

Now let’s look at parts that are only found in electric guitars.

When you strum on an electric guitar’s strings, you don’t directly produce sound. Instead, you produce vibrations. The pickups hear these vibrations and amplify them.

Typical electric guitar pickups are electromagnetic. This means that they have coils of magnets and wires in their core. When guitar strings are plucked or strummed the magnetic field is disturbed, which creates an electric signal that travels to the amplifier.

Electric guitars often have multiple pickups. The instrument’s strings have a different tone at various positions so having several pickups allows you to use different tones.

The knobs on your electric guitar’s body are known as volume or tone controls. The type of wiring used to connect them changes from guitar to guitar. Some have separate wiring and knobs, while others use the same wiring for both controls.

Their function is quite simple: controlling how bright the signal coming from the pickups will be.

This is where you plug the guitar lead and connect your guitar to a speaker.

Lastly, let’s review the two parts of a guitar you’ll only find in acoustic guitars.

The saddle is a piece of material (usually plastic or traditionally bone) found on the bridge. It elevates the guitar’s strings to whatever height you want them at. This then transfers vibration through to the soundboard from the bridge.

This height raises or lowers “action,” which is essentially the distance between the fretboard and your strings.

Also, you should know that saddles are kept at an angle to improve intonation. This means that measuring the length from the nut to the saddle does not give you an accurate estimate of the scale length of a guitar.

The sound hole is responsible for sound projection. However, it is not the source of your guitar’s sound, rather it allows vibrating air to escape.

Most sound holes are carved out at the center of the guitar’s body. However, there are some innovative designs that put the hole in other places on the body.

There are several different parts of a guitar, and depending on what type you’re getting, you need to know about most or all of them to be able to play and maintain your instrument. From the body to the soundhole, each part affects your experience with the instrument.

Are you buying a guitar for the first time? Check out our article on the different types of guitar and get some inspiration for where to start with our top ten guitar songs for beginners.