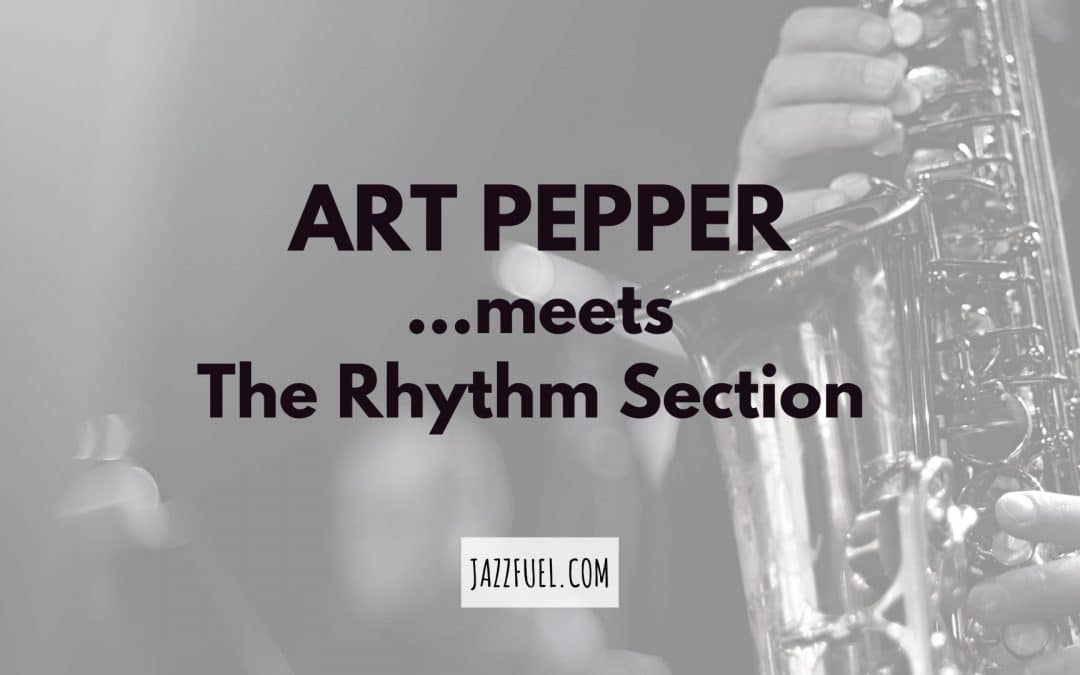 Some the very greatest jazz records were created in fortuitous circumstances and sometimes against the odds, and this is especially true of Art Pepper Meets The Rhythm Section, as we discover in this article about the 1957 release from the alto saxophone great.

Everything seemed stacked against the session even taking place never mind producing music of any worth.

Despite what appeared to be insurmountable problems on the day, the music produced in a  single session in January 1957 an album that is now regarded as a classic and widely believed Art Pepper’s best recording.

But let’s rewind a little and get some background prior to the recording session.

Arthur Pepper was born on 1st September, 1925 in Gardena, California.

His early years were tumultuous, a pattern that would be a recurring theme throughout his life, and was sent to live with his grandmother.

Beginning on the clarinet at the age of nine, the young Art showed promise on the instrument, switching to alto saxophone four years later.

His progress was rapid and by the time he was just seventeen he turned professional playing with Benny Carter, and shortly after Stan Kenton’s Orchestra.

By this time Pepper was gaining quite a reputation but from this point on his career would be very stop and start.

Drafted into the army in 1943 curtailed his activities for a time, and after he was discharged his career was dictated and governed by his heroin addiction and frequent spells in prison.

He finally kicked his addiction in the late sixties. Once clean the saxophonist continued to tour and record until his death from a stroke on 15th June, 1982.

His playing was often straight forward and candid, and even more so was his autobiography, Straight Life, co-written with his third wife Laurie Pepper and published in 1980.

Throughout his career he would still pick up the clarinet and occasionally be heard on tenor saxophone, but it was his alto playing that would feature much of his best playing.

As an alto player on the early forties it was almost impossible to escape the influence of Charlie Parker but, like Lee Konitz, the young altoist took what he wanted from Bird’s playing and fashioned an altogether different style on the instrument.

Playing with less aggression and attack he developed a cool style of playing. While similar in concept to that of Konitz on the East Coast, Pepper played with more passion and an emotional leaning that was hard to contain.

Living in California for much of his life, he was inevitability identified with the West Coast cool school of playing and became part of the movement in jazz that sought to smooth out the jagged phrasing of bebop.

With the West Coast cool proving popular with critics and jazz enthusiasts alike, Pepper established a recording career under his own name in the early fifties.

By the mid-fifties, when not in prison for drug related offences, the altoist was a regular in the LA studios with a string of highly acclaimed recordings.

It was therefore a little ironic that the recording that would receive the most critical acclaim should be the one he was least prepared for, Meets The Rhythm Section.

The Rhythm Section in question was no other than pianist Red Garland, Paul Chambers on bass and drummer, Philly Joe Jones who at the time were the rhythm section for Miles Davis, and along with fellow bandmate John Coltrane became known as Miles’ First Great Quintet.

Assembled by Davis in 1955, The Rhythm Section had spent countless hours on the bandstand and recorded four classic albums for Prestige on two mammoth recording sessions in May and October 1956.

However, despite their obvious compatibility this particular line up was slated by critics who questioned Davis’ judgement when putting together his first regular working band.

Garland they said was nothing more than a cocktail pianist, Paul Chambers was too young, and the drummer was too loud. History, of course, proved that they could not have been more wrong.

The circumstances that resulted in the recording of Meets The Rhythm Section also appear slightly bizarre.

Pepper recalls in his biography Straight Life, that he wasn’t aware of the session until the actual morning of the date, had never met any of the musicians beforehand (although an ardent admirer of their work with Davis), and that he hadn’t played the alto for two weeks.

It also came to light that he didn’t know any of the tunes either. 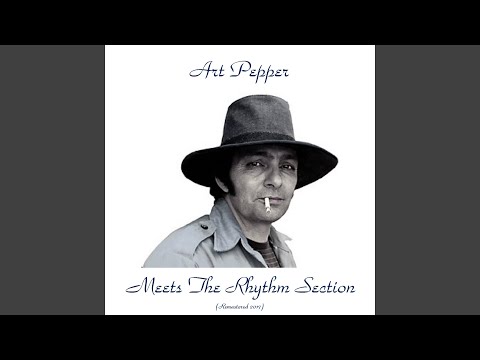 The resulting music is astonishing.

If the situation demands that one makes the best out of adversity, Art also complained that the instrument that he played was in less than perfect working order, then all four musicians played above themselves on that session.

The opening ‘You’d Be So Nice To Come Home To‘ exudes confidence. Pepper is the epitome of good taste in his reading of the melody, and eases gently into his solo as Garland, Chamber and Jones gather up the momentum.

The alto solo is vibrant and alive with expression riding effortlessly over the changes. ‘Red Pepper Blues’ is an attractive piece by Red Garland and may well have been written especially for the session.

This then would have been new to Art Pepper, but this is not noticeable in his confident and assured run through of the theme and subsequent solo.

Not to be outdone, ‘Waltz Me Blues’ is by another neat and concise blues theme with composer credits going to Pepper and Paul Chambers.

A simple but effective tune that produces another lovely compact solo from Pepper. The saxophonist also takes composer credits for ‘Straight Life’, a fast bebop number that Art is all over in a fleet fingered solo that is free of cliché.

Red Garland also feels at home with Pepper’s tune and takes a sprightly solo followed by and arco solo from Chambers.

The remainder of the session was made up of jazz standards, and Dizzy Gillespie’s tune, ‘Birks Works’.

There is a nicely swinging ‘Star Eyes‘ with the saxophonist sounding relaxed and extremely fluid in his melodic ideas, and he is totally in command on the ballad ‘Imagination’.

The trio ease into a gentle swing as Art develops his solo, and the saxophonist obviously relishes the support provided by this exceptional rhythm section.

The obligatory Latin number is taken care of with ‘Tin Tin Deo‘ that the quartet breeze through with little effort. Smartly arranged the piece breaks up the mood creating a new rhythmic feel for the solos, but the surprise track of the album is ‘Jazz Me Blues’.

Written by Tom Delaney and first recorded by the blues singer Lucille Hegamin accompanied by Harris’ Blues and Jazz Seven on 15th November 1920.

A complete contrast to what has gone before, Art and the rhythm section obviously had some fun with this piece, and this comes in the joyous nature of Pepper’s entry and playing of the theme.

There are also some superb solos from all, especially Paul Chambers’ pizzicato solo.

An astonishing album made under astonishing circumstances. Why the date was not cancelled given  the events immediately prior to its commencement is a mystery.

Whatever transpired to ensure the date went ahead, we should be grateful that Pepper got to the studio and was handed an alto as the music produced is truly exceptional.