A Jazz Musician’s Guide To Getting Things Done 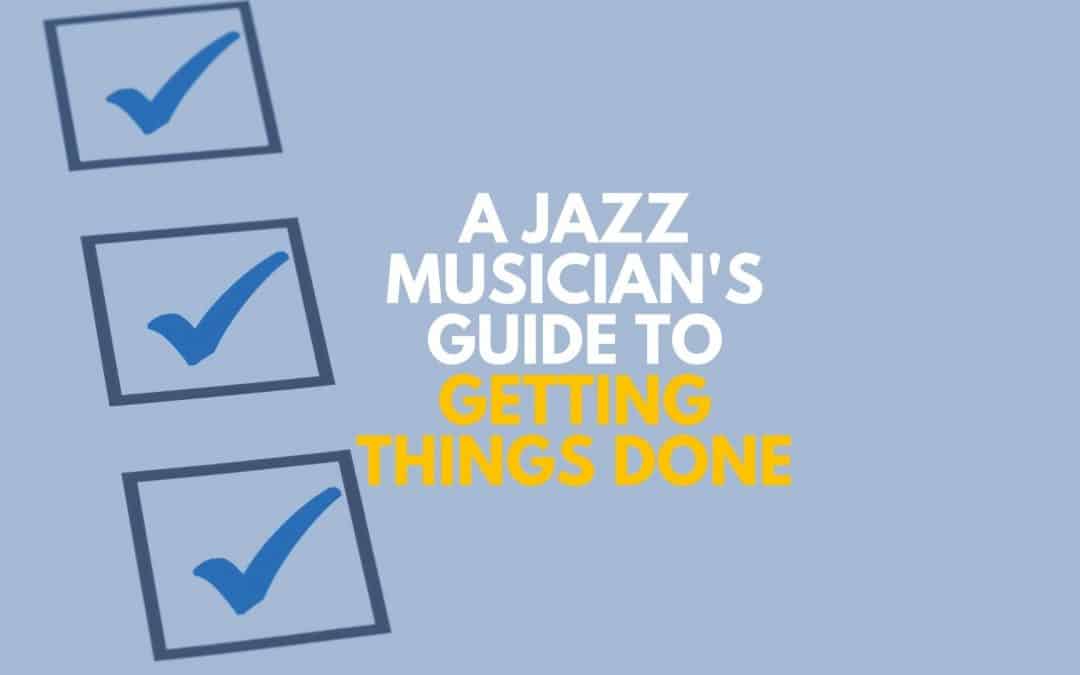 It’s not easy being a 21st Century jazz musician, is it?!

Not only are you meant to be the best you can on your instrument and make great music, you almost certainly have to take on many of the business and ‘admin’ tasks including booking gigs, social media, accounting, press outreach, networking, album release planning and much more.

There may not be a magic ‘fix’ to getting on top of all this – and staying there – but there are lots of resources and strategies out there which might help you get close to this.

One fascinating concept is from a book called Getting Things Done by David Allen. It’s spawned an international coaching franchise and helped many people get things done.

Norwegian jazz vibraphone player Karl Ivar Refseth not only learnt how this method could help him as a working musician, he also trained as an official coach for the programme.

Over to you, Karl!

Karl Ivar Refseth is a Berlin-based Norwegian musician and coach. Through his work with Getting Things Done, he helps people get rid of stress, attain their optimal focus and get more productive and important stuff done with less effort.

At the core of my being, I am a musician.

That all sounded right in my head, but mostly it didn’t get me the results I wanted.

For instance, if you’d come by my flat in Berlin you would have stumbled over large piles of unsorted stuff: papers, clothes and vibraphone-mallets, all piled on a suitcase from when I got home from my last tour two weeks before… and that was just one pile.

So much so that my neighbour called me “Chaos-Karl”. 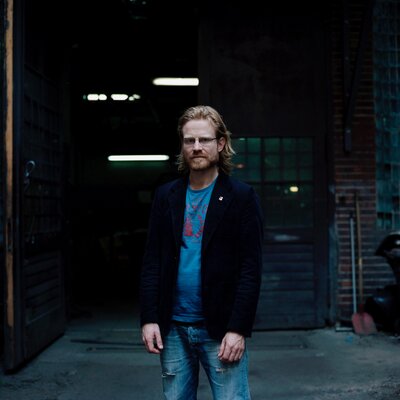 And it wasn’t just my physical space that was affected by this chaos. I played in a lot of great bands, but it wasn’t the music I REALLY wanted to play at that time.

I practised a lot, but on stuff that didn’t move me forward. I regularly forgot deadlines for grants, and missed opportunities to get gigs for my bands. I even missed out on free private lessons with one of my heroes, the legendary David Friedman.

I was constantly late and very often stressed out. There is no need to mention money, because I never had any.

All of this was ‘normal’ for me and I unconsciously shaped my life so it would be this way.

While chatting with a dear colleague and mentor of mine, the subject of how the last 13 years of using GTD has influenced my life as a musician came up.

The list of benefits I was able to name without any preparation was so impressive to the two of us that I wanted to share some of it with you here.

One of the promises of GTD is that it will help you to enjoy the feeling of getting more of the right things done with less stress. That has certainly been my experience.

An example: It’s a lot easier to compose new good stuff and practise the things that bring me forward as an artist the most.

Wherever I go, I try to have some tool with me to capture any idea: whatever comes to my mind I might want to practise, any ideas on how to move on with a composition, grab any new idea for a new song, etc.

Now and then during my day, I then make decisions on each of them. Throw away some, save some in my archive of composition ideas, define smart next actions, for instance “practise bar 12-16 with focus on time” or “add voice-recorded-idea into my DAW”.

And last but not least: define some outcomes, for instance: “finish 10 great compositions for my next record” and “master that crazy difficult piece with ease and fun”

I then organise all the desired outcome on one list, the next actions mostly go on my “things to practise” or “next action for composition” lists.

About once a week, I go through those lists, add new stuff, mark some as complete, delete some, and then at the end, I use these lists as options I can choose from when I’d like to compose or practise.

I get up too late, watch videos on my smartphone when I should have done more meaningful stuff and drink beer when I’d maybe better off with a smoothie.

There are many days I don’t get so much meaningful stuff done. By the way, I’m totally OK with that – I don’t want to be some kind of perfect productivity guy. GTD is not about perfection for me, but about living a creative and full life.

I’d say, for us musicians, it’s the same difference you experience after consistently and carefully studying an instrument for 13 years, but here, it’s about:

I’m reviewing everything as often as I need to and using it as reminders, so I can go through my day, trusting that what I do at any point is the right thing to do, with very little stress.

And that is such a great feeling.

I’m not necessarily successful or famous, like getting the coolest gigs with my band or having many fans. There are many, many musicians out there that are a lot more successful than me.

But I can truly say that I’m very, very happy and although still being extremely forgetful, that I’m spending my life how I want it the most, given any circumstances. 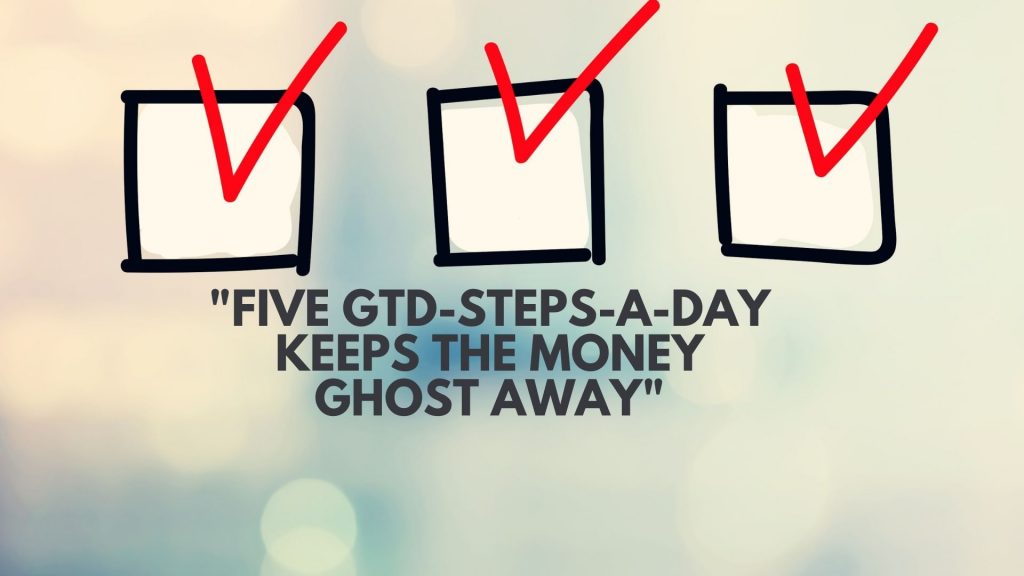 How practising GTD helps me as an unemployed jazz-musician to earn more money.

There it was again. The ghostly voice.

“Hhhhhhhow are you going to pay your rent next month?”

Back when that spectral voice was a regular part of my life, I lived in a tiny flat in the back courtyard of a building in Berlin.

The gray concrete wall three meters from my only window meant there wasn’t much light, even at midday. It shouldn’t have been a challenge to pay that rent on it, but it was on more occasions than I want to admit.

If staying home wasn’t much fun, going out was also challenging.

Into that world dropped the most delightful thing in my life: the birth of my lovely daughter. Wonderful, and…I then had to earn twice as much money in half the available time. Ooof!

Jumping to present time and about 13 years as a musician powered by GTD, I can happily state that my flat has become significantly larger. From my lovely light living-room I look straight into a park in the middle of Berlin-Kreuzberg.

I can go out to eat whenever I want, and although I often decide not to buy new cool stuff because I don‘t really need it, I always have the possibility to do so when something really special shows up. Like the supercool hifi-system in my living-room that drops me into the 5th row at the Wiener Musikverein while Carlos Kleiber conducts his legendary recording of Brahms‘ fourth symphony. Worth every penny!

I have a small team working for me who manage different aspects of my work, so I can focus more on my music and I even have a marvellous person who cleans my flat and my rehearsal space regularly. It‘s so nice to have clean surroundings when I‘m totally occupied with my musical projects.

Today, I go through my day with a good feeling when it comes to money, that I have the tools to make sure there will always be enough.

So, as a freelance jazz-musician, how do I use GTD to get all this? Just a couple of examples:

There’s other things as well, but those two are the prime money-spinners for me.

Maybe you think, “Classic. Another musician who sold his soul for money.”

That I‘m only focusing on earning money and not on just playing the music I want.

Not a chance: I ONLY play the music I want!

The GTD-methodology basically handles the financial aspects of my life for me, so that I can fully lose myself in any creative process as an artist. Right now, for instance, I‘m spending a huge chunk of my time composing my second solo album.

Thankfully, the money-ghost is long gone. It rang my doorbell pretty insistently in March this year, when I lost most of a year’s work over a period of 48 hours, but a good weekly review had it on the run again.

Haven‘t seen it since then.