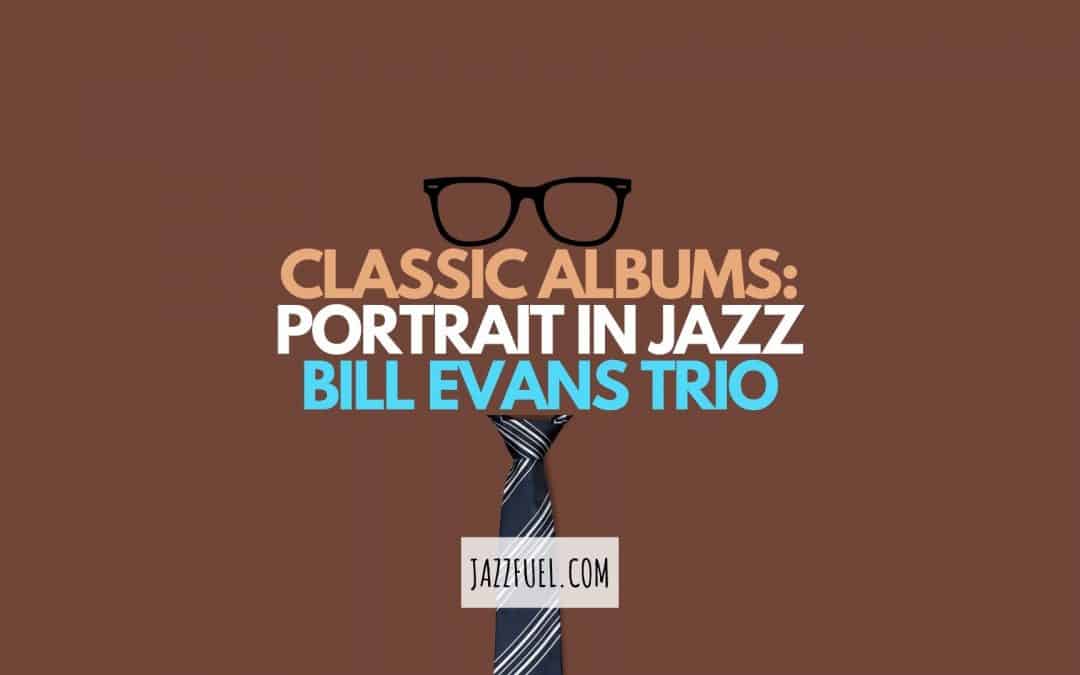 Bill Evans is undoubtably one of the most important pianists in jazz and, in this article, we take a look at his iconic album Portrait In Jazz, starting with a trip through his early career to see what influenced such a brilliant recording.
From his arrival on the New York jazz scene in 1955, Bill Evans gave notice that here was a major new stylist on the instrument.
Not only was his approach to the piano unique, he was also to play a significant role on some of the classic albums of the time before going on to form his Trio with bassist Scott LaFaro and Paul Motian on drums that would revolutionise the way that the piano trio functioned.
Born William John Evans on August 16, 1929 in North Plainfield, New Jersey, the young Bill Evans took an interest in the piano while watching his sibling Harry, who was two years older, having lessons.
Showing an aptitude for the instrument he too started having lessons, also briefly taking up violin and flute at the age of seven. He soon gave up these instruments to focus his attention on the piano.
His first exposure to jazz was at the age of twelve upon hearing the bands of Harry James and Tommy Dorsey. He would also listen to saxophonist, Coleman Hawkins and Stan Getz, along with pianists Bud Powell, Earl Hines and especially Nat King Cole of who he was especially fond.
At this time Evans also cited Mozart, Beethoven and Schubert as composers who work he would admire and play, and indeed throughout his early teens it was classical music, and hearing 20th century composers Stravinsky and Milhaud that were exerting the greatest influence on the pianist.
After leaving high school in 1946, Evans would begin his further studies at various colleges, a difficult period that was also interrupted by three years national service in effectively writing off 1951 – 1954. After discharge from the army, Evans returned to New York to continue his playing career, also enrolling at the Mannes College of Music to study composition.
Apart from his studies, Evans would play low key gigs in the city, although he did have the opportunity to play a solo opposite the Modern Jazz Quartet at the Village Vanguard. And who should be spotted listening to the pianist? None other than Miles Davis, who would be so important to Evans’ career in just a few short years.

Bill Evans made his debut album as leader in 1957 on the Riverside label with New Jazz Conceptions.

Recorded in September 1956 the album’s title made a bold statement of intent that was backed up by some superb playing. The trio featuring Evans, bassist Teddy Kotick and Paul Motian on drums (who would be such an integral part of the pianist’s best work).
The album was primarily made up of standards, a Tadd Dameron tune, and the first recorded version of ‘Waltz For Debby’.
Although it would be two years before he made another trio recording under his own name, in the meantime Miles Davis would come knocking at his door.
Bill Evans officially joined Miles’ group in April 1958 replacing Red Garland, and bringing with him a softer approach. The relationship between Miles and Evans is often at odds with each other.
Miles professed to love the pianist’s playing yet would tease him mercilessly about being the only white man in the group. Evans was a sensitive person, and Miles jibes hurt him deeply but he had such respect for the trumpeter and realised that he could learn much from him.
This seems to have been a mutual opinion of each other, as Miles would frequently go to Evans for advice or to discuss a musical problem.
Evans’ stay with Davis Sextet, which featured saxophonists John Coltrane and Cannonball Adderley, along with bass player Paul Chambers and drummer Jimmy Cobb, would last only eight months but in that time Miles and Evans had a profound influence on each other’s playing.
So great in fact, that Evans would be recalled by the trumpeter to record on the seminal Kind Of Blue album recorded the following year, which with hindsight would have been inconceivable without Evans at the keyboard.
Leaving Miles in November 1958, the pianist went on to record his second trio album, Everybody Digs Bill Evans in December of that year.
With a bass and drums team of Sam Jones and Philly Joe Jones, Evans was not merely content to consolidate on New Jazz Conceptions, but sought to push his musical boundaries further combining the assertiveness that he discovered playing with Miles group, but also the delicacy and sensitivity inherent in his own playing that the trumpeter so desired a few months later when preparing to record Kind Of Blue.
A superb record that has stood the test of time, and yet with performances such as ‘Peace Piece’ and an astonishing reading of ‘Young and Foolish’.

The breakthrough album, not just for Bill Evans but the development of the piano trio in jazz, is Portrait In Jazz.
Recorded December 1959 Evans and his new trio of drummer Paul Motian, who had played on New Jazz Conceptions, and the phenomenal young bassist, Scott LaFaro presented a set that looked on paper nothing more than a bunch of standards and a couple of originals.
However, when the record was placed on the turntable and the needle placed on the microgrooves this notion would be completely blown away.
The treatment of the jazz standards was completely new.
Not merely piano stating the melody and then soloing over the chords accompanied by bass and drums, here were three of the great jazz musicians of the era working as equals within the music, in a three-way dialogue where all contributed equally.
Never before have bass and drums communicated in quite the same way before.
Scott LaFaro was a virtuoso bassist who heard melodies and counter melodies and well as the traditional rhythmic role of his instrument and had the technique to implement his musical whims as he heard them. He had also discovered that by lowering the bridge on his bass that playing fast passages and runs became much easier.
However, all the technique and theoretical knowledge do not necessarily make for good music, and it is the remarkable empathy and almost telepathic communication between the trio that make the music so compelling.
Just listen, for example to how they turn ‘Autumn Leaves’ into tour de force with the pent up tension that is felt in the tune opening theme statement leading to LaFaro’s solo with commentary from piano and Motian’s brushwork before the drummer switches to sticks that lift the performance. 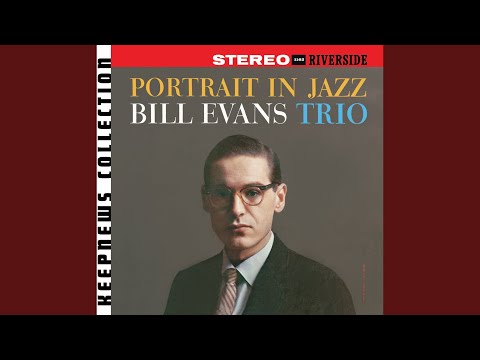 Bill’s piano solo swings joyously, but his improvisation demands careful attention to its detail. His solo swings hard, but the lines eschew a simple run through the chords and instead reveals an astute musical mind in a genuinely original and captivating solo.

When the track concludes, listen to it again this time focussing on the bass and prepare to be amazed again. You can of course repeat this again listening to Motian’s contribution, and once again be wowed.
This level of interplay is staggering, the technique to play at this level is incredible, but it is the intuitive level at which the trio operate is awe inspiring and jaw dropping.
No less inspiring is another powerful and assertive work out on ‘What Is This Thing Called Love?‘, but as is often the case it is in the slower tempos that the approach of the trio can be heard in the most detail.
‘Someday My Prince Will Come‘ is taken at a gentle medium swing tempo that allows for an unhurried approach.
Motian’s brushwork is masterful and LaFaro’s counter melodies lend extra weight to Evans’ solo.
‘When I Fall In Love‘ in taken at such a tempo that everything that is happening around also seems to slow down and one can bask in the beauty of the music. Here the performance is so tightly controlled and compressed it is truly as if the trio are of one mind.
Of the original compositions by the pianist, ‘Peri’s Scope‘ is another up tempo piece that resonates through Motian’s propulsive yet unobtrusive drumming, and a version of another Evans classic composition ‘Blue In Green’.
The piece had been recorded in March 1959 by Miles Davis on the first of the two sessions that produced Kind Of Blue for which the trumpeter claimed the composer’s credit.
However, Evans always maintained that the tune was his, saying that before the recording sessions that Miles had given him two chords G minor and A augmented written on a piece of paper and asked the pianist what he would do with those.
Evans recollection was that “I didn’t really know, but I went home and wrote ‘Blue In Green’“.
The version here is quite different from the earlier effort that graced Kind Of Blue, with the melancholy melody that Miles played on muted trumpet taken by the piano yet has a lightness and optimism coupled with an easy swing that was not in keeping with Miles’ concept at that time.
A remarkable and original album in every sense, Portrait In Jazz was a ground breaking recording, and one of only four albums that would be recorded by this influential trio prior to the tragic death of bassist Scott LaFaro in a car accident on  July 6, 1961.
The other recordings, one studio album Explorations and two live recordings from the Village Vanguard in New York issued as Sunday At The Village vanguard and Waltz For Debbie continue and develop the work began on Portrait, and how the trio might have taken their concept of group interplay further is a matter of conjecture.
What is certain is that the piano trio was never the same again.