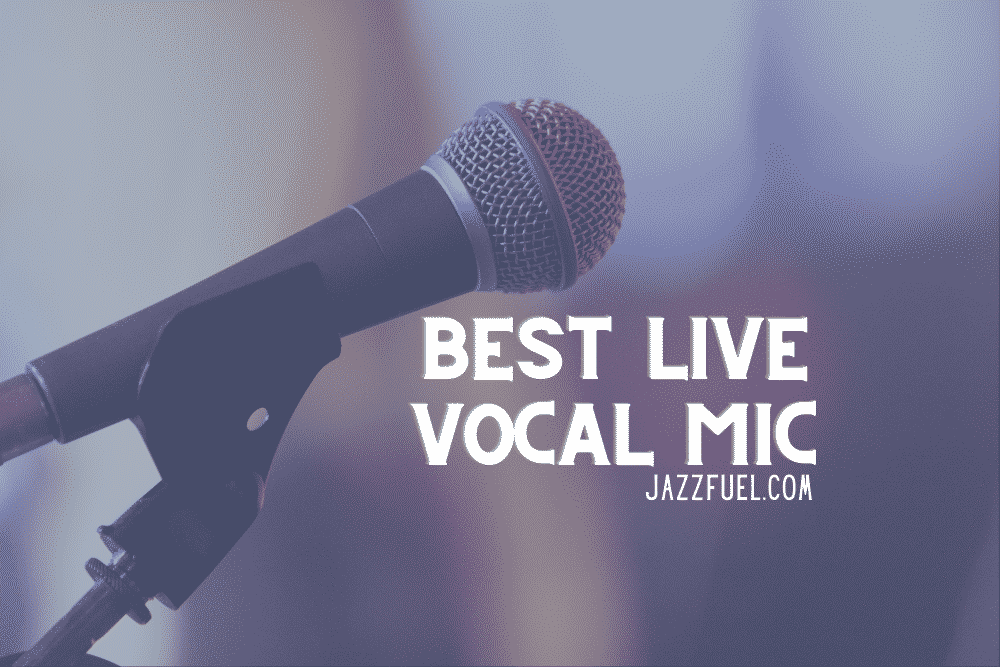 Picking a vocal microphone can be a hard choice, especially with so many options out there to choose from. If you’re a jazz vocalist looking for the best microphone for live shows keep reading. In this article, we’ll explain what you need to look out for in your hunt for the best live vocal mics.

For a start, you are going to need something rugged, reliable, and built to last if you’re using your vocal microphone for live performance. And of course, you will want to ensure you’re getting great sound quality with your vocal mic.

To narrow down our options, we first need to understand what we need from a live vocal mic. This includes its build quality, frequency response, polar pattern, and the type of microphone itself.

Ultimately, you want something that sounds great and is powerfully built. Before diving into all the picks, let’s have a look at our top 3 table:

Keep reading for a detailed beginner’s guide to buying a microphone and a selection of the best live vocal mics out there for jazz vocalists.

Dynamic mics are known for being rugged, with a balanced frequency response that makes them versatile for recording and live use. This includes vocals, as well as guitars, bass guitars, and drums.

Condenser mics are more fragile – both in design and frequency response. This leads to greater handling noise. Handling noise, in short, is produced when a microphone and its cable are moved.

Typically, condenser microphones are used for their ability to capture higher frequencies and quieter sounds. As a result, these are best for acoustic guitars, cymbals, and high-fidelity vocal recordings.

Both dynamic microphones and condenser mics are used for live applications where vocals are concerned.

But what separates the two is that a dynamic mic, thanks to having less handling noise, is often used as a handheld microphone, while a condenser mic is secured in a mic stand to prevent any unpleasant handling noise when moved.

If you’re a jazz vocalist, you might want to consider using a condenser microphone to ensure your full vocal range is captured. But if you like to pick up your mic and stroll around the stage while you perform you will need a more rugged dynamic mic to avoid handling noise.

The Best Polar Pattern of a Microphone

What about polar patterns – what are they?

The polar pattern of any microphone is the sensitivity of the microphone, as well as the overall direction, or area, that it detects and picks up sound from.

An omnidirectional microphone, as another example, has a polar pattern that picks up sound from all directions, i.e. with a full 360-degree range.

This would typically be used when recording multiple sounds within a room.

There are various other types of microphone polar patterns, including hypercardioid, supercardioid, subcardioid, and bi-directional, all used for different purposes.

So, which type of microphone is best for live jazz vocals?

As touched upon, dynamic mics are best for handheld use due to the fact that they are rugged, often with a cardioid polar pattern, that allows the vocalist to hold the microphone and sing directly into it.

A condenser mic, however, is more suited to microphone stands due to its fragile nature and frequency-sensitive design.

In general, dynamic microphones are the better choice for their durability, versatility, and affordability.

Below, we have listed some of the best – and most trusted – live vocal mics that you can buy today. Learn about each microphone and what makes it so good, before weighing the pros and cons of each option!

If you know a thing or two about recording or live mixing, you will know about the Shure SM58.

This veteran mic is a legend in the music industry and is considered the most well-known microphone of all time. Widely regarded as one of the best live vocal mics, it should not be left out of any jazz vocalist’s arsenal!

You can’t go wrong with the SM58 as a live mic – an affordable, tried and tested dynamic, cardioid pattern mic that is guaranteed to serve you for many years.

The SM58 is not to be confused with the Shure SM57 which is essentially the same microphone with a different grille. The SM57 features an in-built grille that allows the mic to be positioned closer to the sound source making it a great fit for instruments but not for live vocals.

The Telefunken M80 is another rugged, dynamic cardioid mic like the SM58 that is widely considered to be a copycat version, except with a greater low-end response.

So, why would you choose this over the SM58? The M80’s low frequency response makes it slightly more preferable for recording deep voices, bass drums, bass guitars, and so on.

Sennheiser is no small name in the music industry. In fact, their range of mics – particularly their condenser microphone range – is one of the most trusted around.

You would be hard-pressed to find a studio without a Sennheiser in its recording repertoire.

The Sennheiser E835, in particular, is one of these well-known mics for recording vocals.

A dynamic cardioid microphone, this Sennheiser is ideal for live performance, sitting at a similar price range to the famous SM58. If you prefer Sennheiser as a brand, this might be for you.

The Audix OM range has grown over the years (there are now six of them), but the Audix OM2 – the original entry – is the one that most producers and live sound engineers return to time and time again.

Why? Because the Audix OM2 represents everything that’s great about the OM range: the hypercardioid polar pattern, robust look and feel, and wide frequency response (50 Hz to 16 kHz).

The hypercardioid pattern sets this mic apart from the ones listed above, with the ability to reduce handling noise and unwanted background noise being picked up from the sides of the mic.

The best live vocal mic is the one best suited for the purpose! In general, however, a dynamic cardioid microphone – such as the iconic Shure SM58 – is ideal for most vocal ranges, as well as for on-stage durability.

If you want to check out other brands of microphones, Warm Audio, SE Electronics and Audio Technica are all respected brands known for producing high-quality vocal mics. The AKG D5 is a slightly cheaper alternative to the Shure SM58. And the Rode M1 is another popular choice.

Dynamic cardioid microphones, including all the live mics we listed above, are incredibly versatile, perfect for recording instruments (as well as vocals), including drums, electric guitars, bass guitars, and so on.

Complete your set-up with a great pair of headphones for the next time you’re in the recording studio. If you’re a guitarist as well as a singer, be sure to check out our rundown of the best guitars brands.