“This album is dedicated to those who never give up; to those who pursue their dreams, write their living destiny every day. Above all, to those who do not give up in the face of obstacles, and continue to smile, and make the world more beautiful.”

Using his compositions and improvisations as an introspective tool, italian guitarist Luca Di Luzio treats his songs as musical reflections of his journey, and a means of sharing his most significant learnings with the world. His upcoming album “Never Give Up” is set to release on December 10 on Jazzlife Records.

A jazz guitar graduate of the Conservatorio di Musica Frescobaldi, Di Luzio has studied under the likes of greats including Pat Metheny, Jim Hall, and Mike Stern, and his rich career as a professional has seen him collaborate with legendary drummer Dave Weckl and European saxophone giant Max Ionata.

Featuring top-calibre musicians including the household name of the trumpet that is Randy Brecker, the ensemble tackle an array of styles united by Di Luzio’s guitar-centric compositional voice.

Almost programmatic in nature, “Never Give Up” is a collection of songs that reflect the personal stories of Di Luzio’s life. “A14” is named after the road that connects the guitarist’s birthplace to where he now lives, “Second Life” is about his experience starting afresh in a nice city at the age of 40 and the challenges he had to overcome, while “Fishing In Paradise” and “The Genius” are tributes to two friends he’s lost over the years. 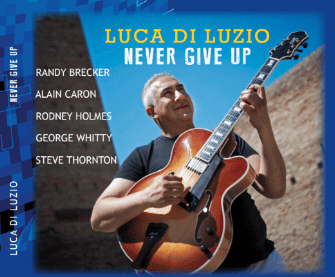