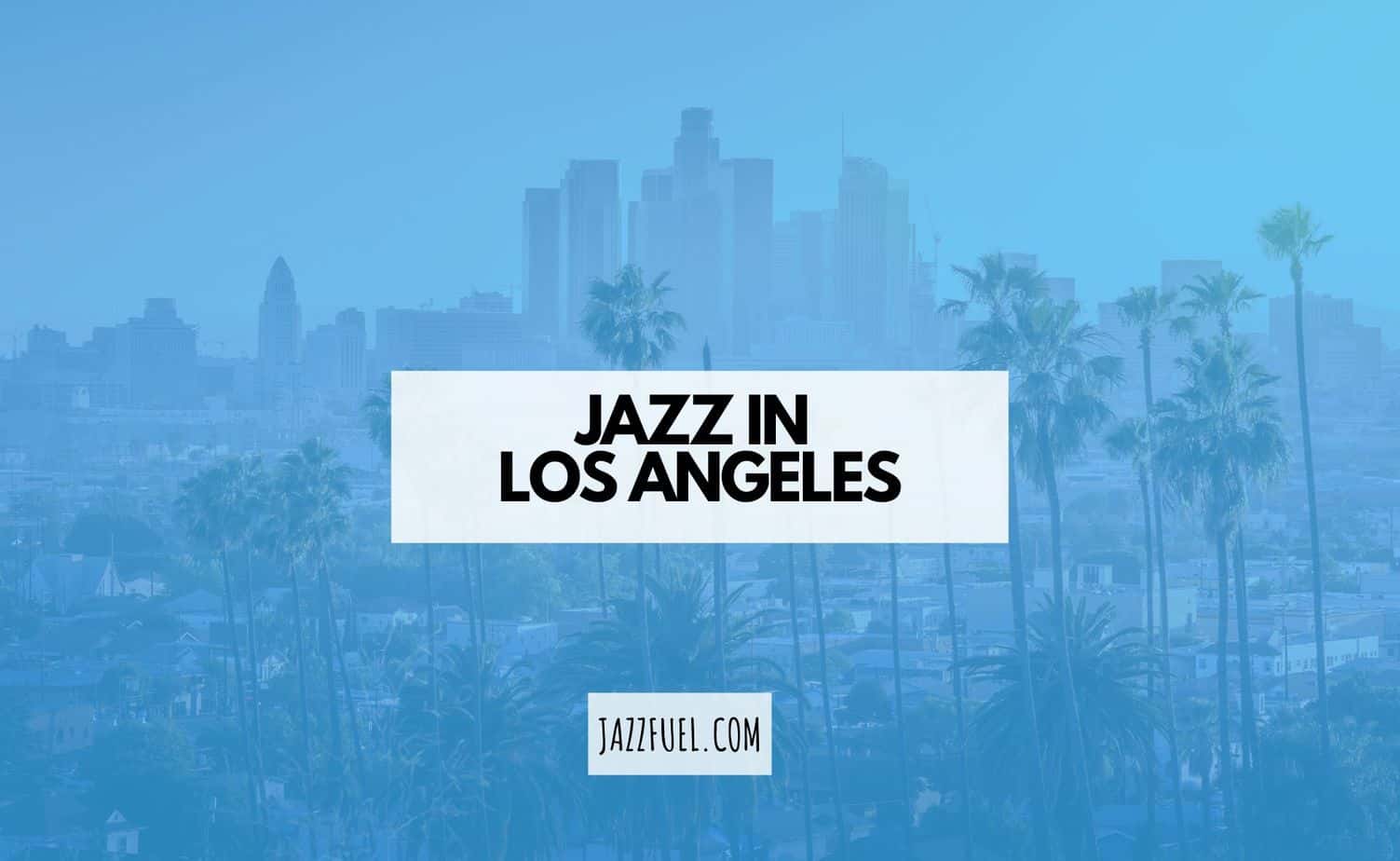 We put this article together to showcase some the best jazz clubs and festivals in Los Angeles, as well as to give a taste of the history of the music in this West Coast city and some notable jazz musicians performing in LA today.

New York has long been considered the epicentre of jazz, following the music’s initial development in New Orleans.

But Los Angeles has a long and important history in jazz too, dating back to when the city’s Central Avenue, at the heart of L.A.’s African-American community, was filled with nightclubs in the 1920s, following extensive migration from New Orleans.

Jazz in LA – the styles & history

In the 1950s, West Coast jazz almost became a sub-genre in itself.

Often associated with the Cool jazz movement it was marketed as a relaxed alternative to the more frantic, ‘hotter’ sounds of bebop.

Chet Baker, Art Pepper, Dave Brubeck, Wardell Gray and Gerry Mulligan are some of musicians associated with this style. (Mulligan was not originally from L.A. but his famous chordless quartet with Baker was based there).

Of course, things are more complex than that, and a major city like LA has produced all manner of stylists.

Dexter Gordon and Hampton Hawes are more associated with bebop, for example, and the great composer and bassist Charles Mingus was raised there before a move to New York.

Eric Dolphy, another eminent Avant-gardist, was also born there.

Due to its proximity to the Hollywood film industry, there is a long tradition of L.A. musicians – including Mel Lewis, Ray Brown, Gary Foster and Jimmy Rowles – doing session work in the studios by day, and jazz gigs by night.

L.A. continues to have one of the strongest jazz scenes in the world. Elder statesmen like Joe LaBarbera (who played in Bill Evans’ trio), legendary guitarist Kenny Burrell and Putter Smith (surely the only person in history to play bass with Thelonious Monk and act in a James Bond film) still live there.

When not on tour, big names in contemporary jazz like David Binney, Ambrose Akinmusire, Kamasai Washington and Louis Cole are also based in L.A, as are top pianists Larry Goldings and Eric Reed.

In fact, in a piece for Jazz Times, Binney, who previously lived in New York, says: “I wouldn’t have said this for many years, but L.A. is the place to be right now.”

Members of the city’s jazz scene also have links to the West Coast hip hop movement, and Akinmusire, Washington and jazz-adjacent musicians like Thundercat and Terrace Martin all featured on Kendrick Lamar’s Grammy winning To Pimp a Butterfly.

Located in Little Tokyo, downtown Los Angeles, Bluewhale has become a major West Coast jazz attraction in the last decade or so.

It was opened by Korean-American singer Joon Lee in 2009, and has hosted major touring acts like the Goldings/Berstein/Stewart organ trio, Jane Monheit, and Jazzmeia Horn, as well as hometown heroes Ambrose Akinmusire and Walter Smith III.

Seating around 100, the club also functions as a bar and art gallery, and is noted for its striking design.

Sam First is a trendy cocktail bar located near to LAX airport, which hosts jazz every Friday, Saturday and Sunday evenings.

Cover is between $10 and $25, and the club’s grand piano is described as “the best club piano in L.A.” by Gerald Clayton in an L.A. Times article.

It also features plenty of singers and crossover artists.

There’s a big focus on the club’s classy food menu, but it is possible to watch from the bar without eating. It presents music six nights per week and operates a fairly smart dress code.

The 100-plus concerts programmed between April and November are enjoyed by over 40,000 people every year.

Home to well-known performer Michael Feinstein, Vitello’s presents a broad range of jazz, musical theatre and comedy and positions itself as one of Los Angeles’s premier supper clubs.

Michael’s musical pedigree (Broadway, five GRAMMY Award nominations, two Emmy nominations and supporter of The Great American Songbook Foundation) gives a good indication of the programming style and the type of ‘big name’ artists they are able to attract.

Located in Studio City, The Baked Potato focuses on jazz fusion and has been described as a “mainstay for session players since 1975.”

With a capacity of around 90, it was named the Best Jazz Club in Los Angeles by Los Angeles Magazine in 2010.

The club, which opens nightly until 2am with shows at 9.30 and 11.30pm, has a vintage feel and was referred to in the film La La Land.

The menu, as the name suggests, offers all manner of inventive variations on the humble baked potato.

The famous Hollywood Bowl, with a capacity of 17,500, plays host to the Playboy Jazz Festival every June.

Recent bookings have included jazz greats Benny Golson, Dave Holland and Terri Lyne Carrington, as well as artists from outside the jazz world like Kool and the Gang and The Family Stone.

The festival was founded by Hugh Hefner in 1959, initially as a one-off event, but it returned in 1979 and has been a popular yearly fixture ever since.

Entry to all events is free, and there are numerous booths selling food, drink and arts and crafts.

With a focus on big name artists in the world of fusion, Latin jazz and smooth jazz, recent editions of Long Beach Jazz Festival have included the likes of Marcus Miller, Randy Crawford and Stanley Clarke. The festival takes place across three days in August, in an idyllic coastal location.

So that’s out brief guide to the Los Angeles jazz scene, featuring some of the great clubs and festivals on offer. If you’re based there, or know the scene well, we’d love to hear from you in the comments section with any more tips and recommendations of where to check out – or play – jazz gigs in LA…