This Time The Dream's On Us

This Time The Dream’s On Us | April 9th, TCB Records

With This Time The Dream’s On Us, prodigious pianist Yuri Storione brings together a highly accomplished line-up of elegant Swiss bassist Dominik Schürmann and renowned Spanish drummer Jorge Rossy.

At first glance, a jazz piano trio album taking its inspiration from a 1941 American Songbook tune doesn’t sound too out of the ordinary.

But dig below the surface and you’ll find a list of 12 songs including 9 ‘original’ standards – new compositions which pay tribute to the greats who came before, whilst showcasing the modern sensibilities of the musicians involved.

This is by no means a solo effort either, nor a young pianist hiring an all-star band: the three musicians contribute together, from the equal billing of the project to the creative interplay and sensitive accompaniment.

Aside from the ‘other’ standard on the album – Thelonious Monk’s Ruby My Dear – composition duties are handled by Storione and Schürmann whose beautiful frameworks provide the launchpad for a host of inventive solos from each player.

Jorge Rossy, as always, displays why he’s renowned as one of the best drummers of his generation: responsive, inventive, extremely sensitive, whose mere presence seems to organise and support the other musicians.

On bass, Dominik Schürmann shows himself as the quintessential team player, before drifting into the spotlight for several features, not least on the soulful ballad Iberica or the up-tempo Happy Hour.

The work of these two established rhythm section players not only provides moments of swinging beauty throughout, but also the support and encouragement for Yuri Storione‘s pianistic exuberance to fully unfold and blossom.

At 27, Storione may be considered something of a newcomer on the European scene but with this, already his third album, he showcases an experience beyond his years, whilst his self-penned tune Viva Bud Powell! gives perhaps the best insight into his musical journey and spirit.

Transforming seemingly classic material into an album of depth and surprise, This Time The Dream’s On Us proves an exciting listen for fans of the jazz tradition. 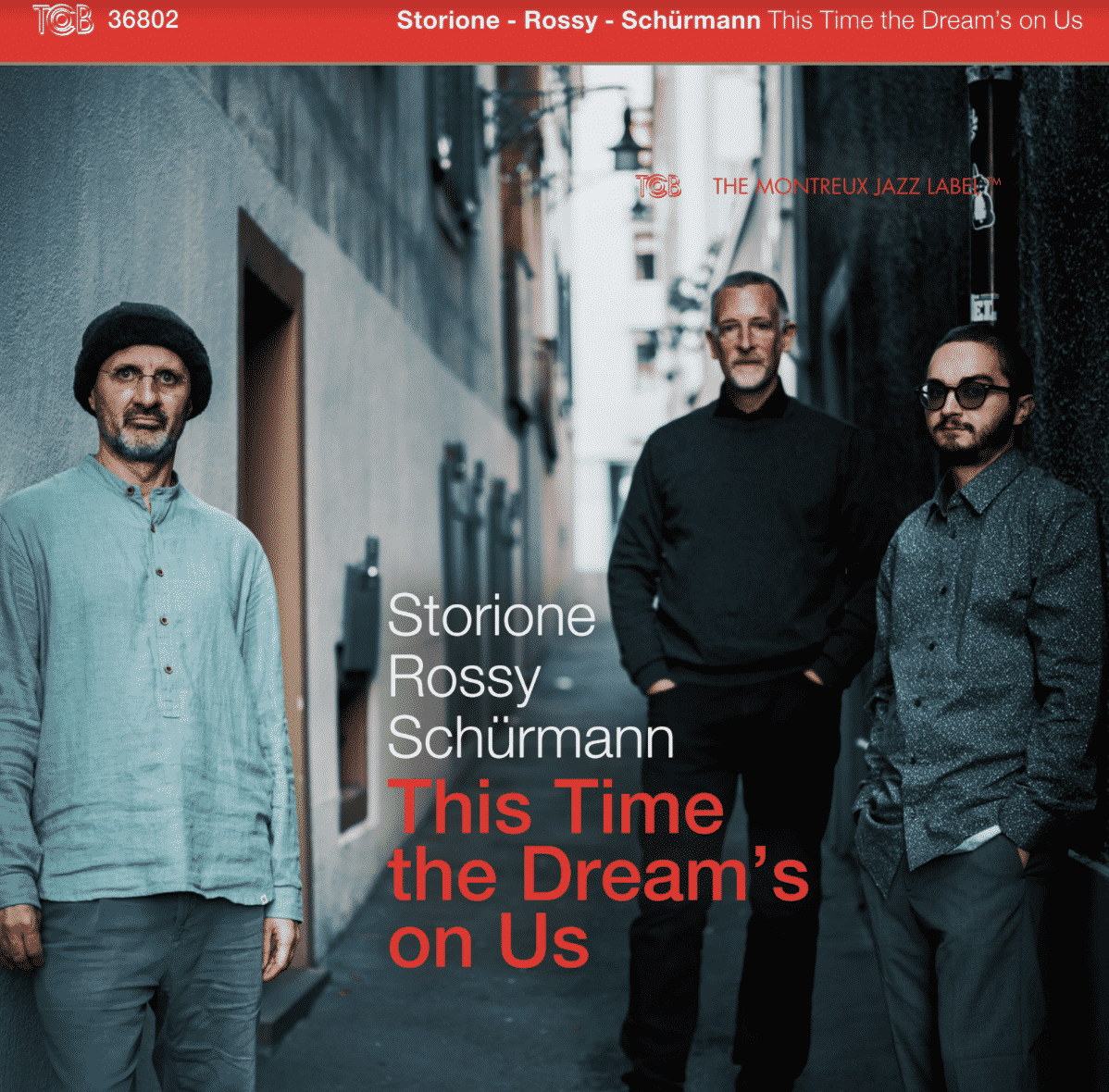 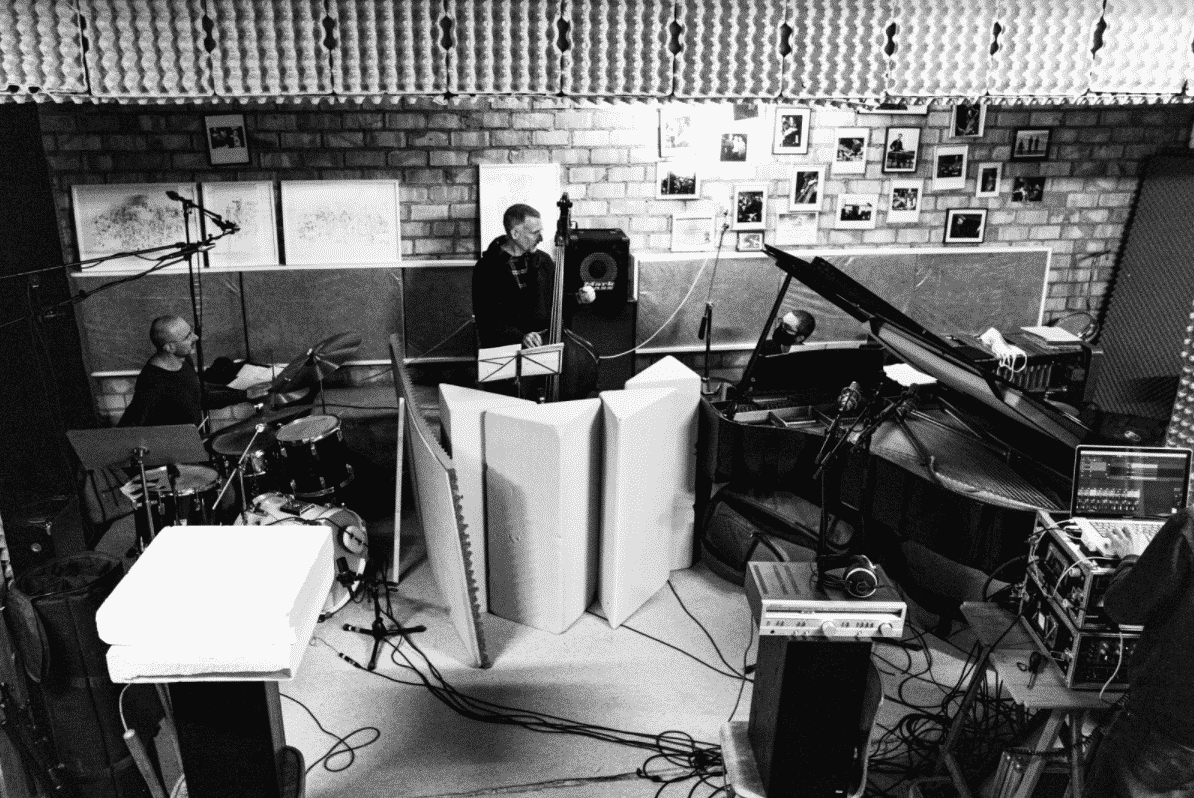 Yuri Storione is a 27 year old jazz pianist and composer with a classical background. He has been playing the piano since he was four. In 2015 he was one of the three finalists of the internationally known “Montreux Jazz” piano competition and won the “Langnau Jazz Piano Competition” in 2018.

Storione graduated from the Basel Musikhochschule on the renowned Jazz Campus, where he received his third master’s degree in 2019.

Storione has performed at numerous international jazz festivals and has given concerts all over Europe including the Malaga Jazz Festival (Spain), Jazz Festival L’Estartit (Spain), the Slovenia Jazz Fest and the Laeso Jazz Fest (Denmark). By Yamaha Corp. he was engaged several times for concerts in Spain.

In 2020 Storione recorded his third album as a band leader, together with co-band leader Dominik Schürmann and jazz great Jorge Rossy on drums: “This Time The Dreams on Us”.

He started piano lessons at the age of six before changing to the bass later on. He quickly became a fixture in the Swiss jazz scene and now works regularly with internationally renowned musicians.

He has performed in numerous jazz clubs and festivals in Switzerland and abroad. He has been a member of Thomas Moeckel‘s «Centrio» since 1998. Countless music projects have been the product this longterm musical friendship with the well known Swiss all-round musician Thomas Moeckel.

Several of his own projects followed these collaborations, such as the coproductions with Schweizer Radio SRF2 Kultur «Dahaana», «Nothing Is As It Seems» (both albums recorded with the Hardbop band «Compulsion») and «Sambâle», recorded with the Piano Trio Gutfleisch-Schürmann-Frey, which was founded in 2017. His album «Upswing» became one of the most successful Swiss CD releases on international download platforms in 2016.

Dominik Schürmann’s work is marked by musical passion, sensibility, harmony, and perfect timing gained by years of experience. He is very much in demand as a sideman or as a bandleader. Whether in jazz, blues or Latin American music, he always leaves his mark with compassion, enthusiasm and eloquence.

Jorge Rossy is internationally recognized as one of the most influential drummers of his generation.

Besides his work as a drummer, Jorge has a distinctive voice on the vibes, marimba and piano, and a unique sound as a composer and band leader. Since his first CD under his own name, Jorge Rossy Trio Wicca (Fresh Sound), recorded in 2006, Jorge has recorded over 30 albums as a band leader or co-leader, to critical acclaim from publications such as Jazz Times, Downbeat, Jazz Around, and All About Jazz.

In 2015, Jorge recorded Stay There (Pirouet), his debut recording, leading a truly stellar band and playing vibes and marimba . Since then, Jorge has been touring and recording with different configurations of his band Jordi Rossy Vibes Quintet and several co-led projects, including Passport Quartet, Rossy & Kanan Quartet, Beck/Landolf/Rossy, Fox + Chris Cheek and Rossy & Vercher Quintet «Filantropía», among others. All these bands are made up of an outstanding cast of musicians, collaborating to create a distinctive sound and an aesthetic full of intimate complicity. 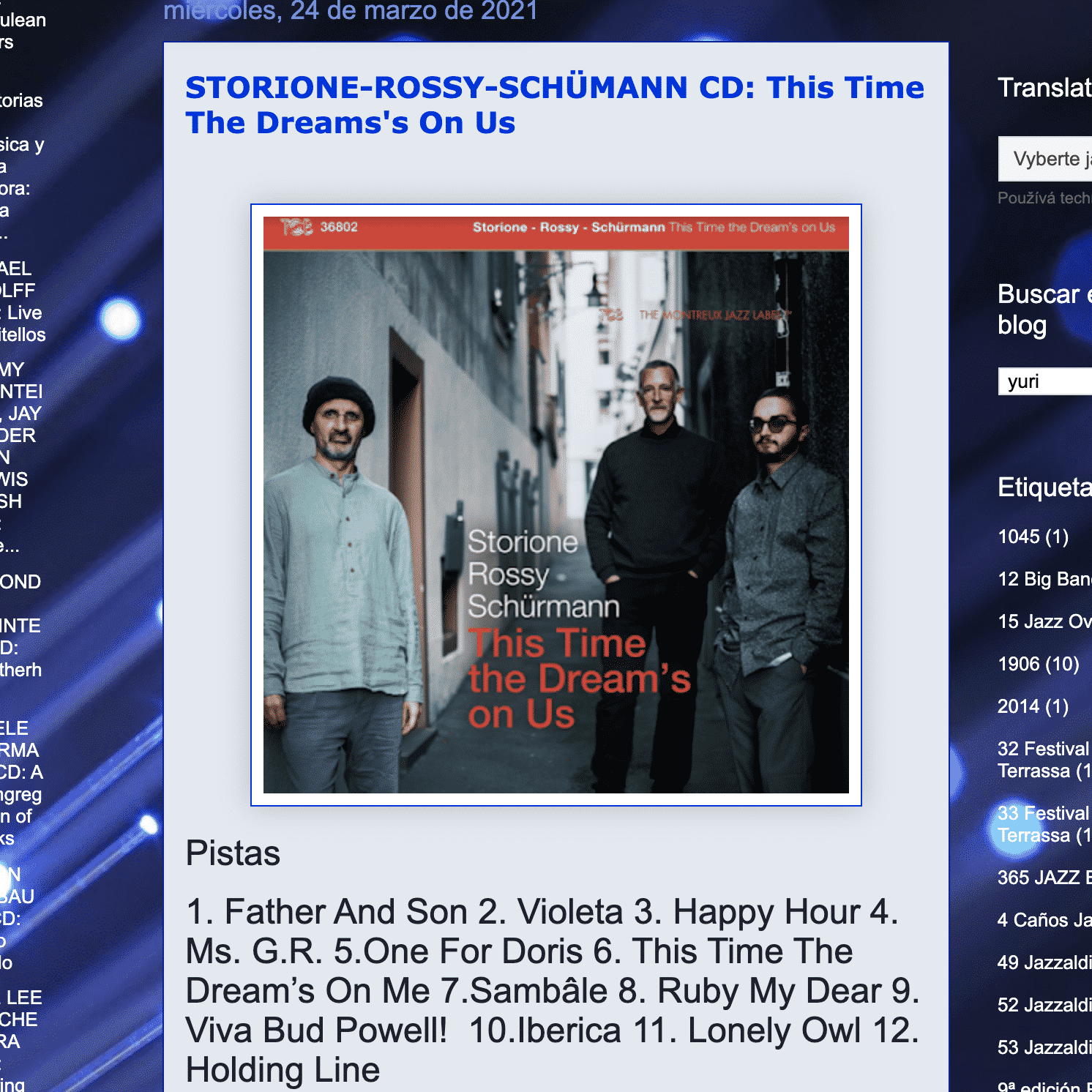 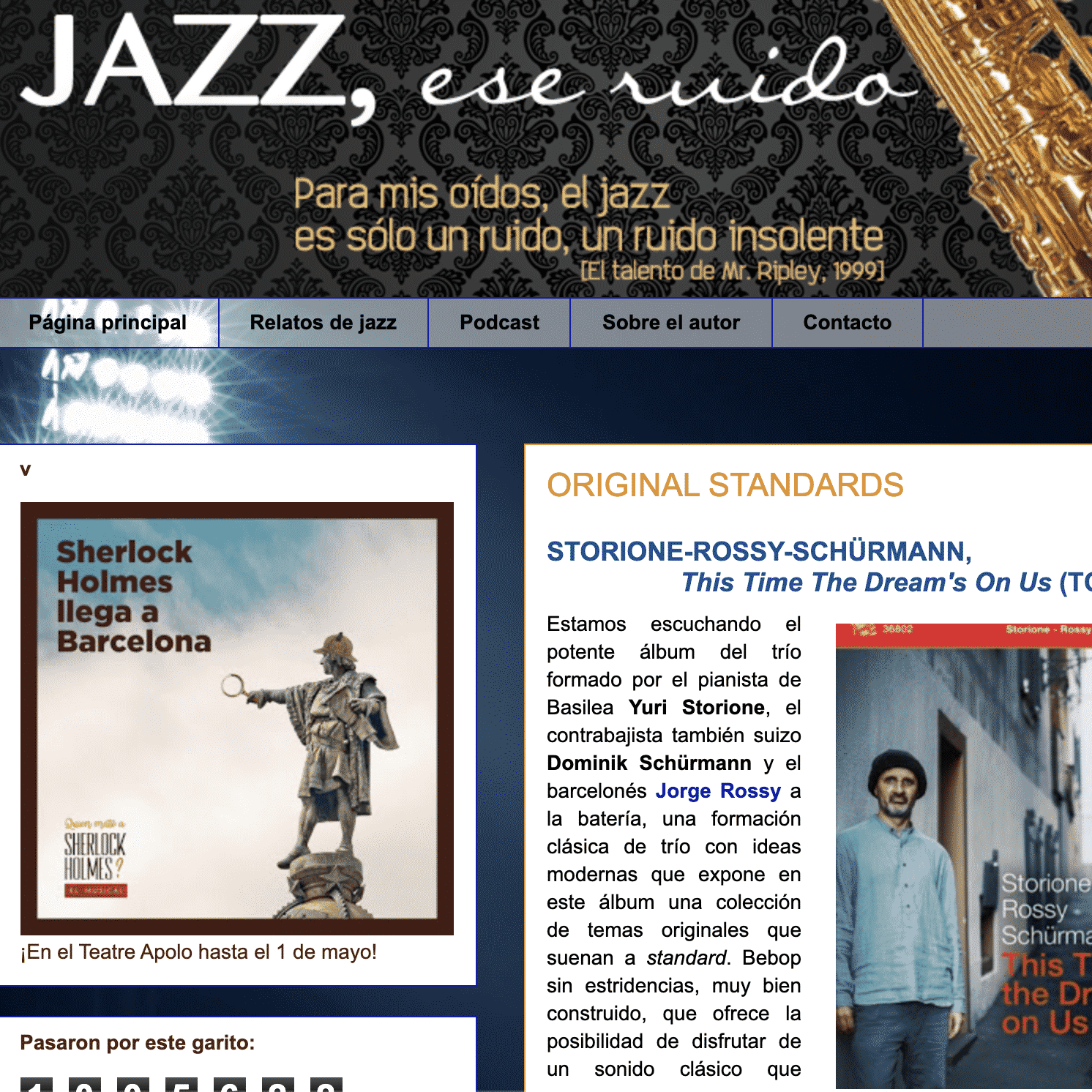 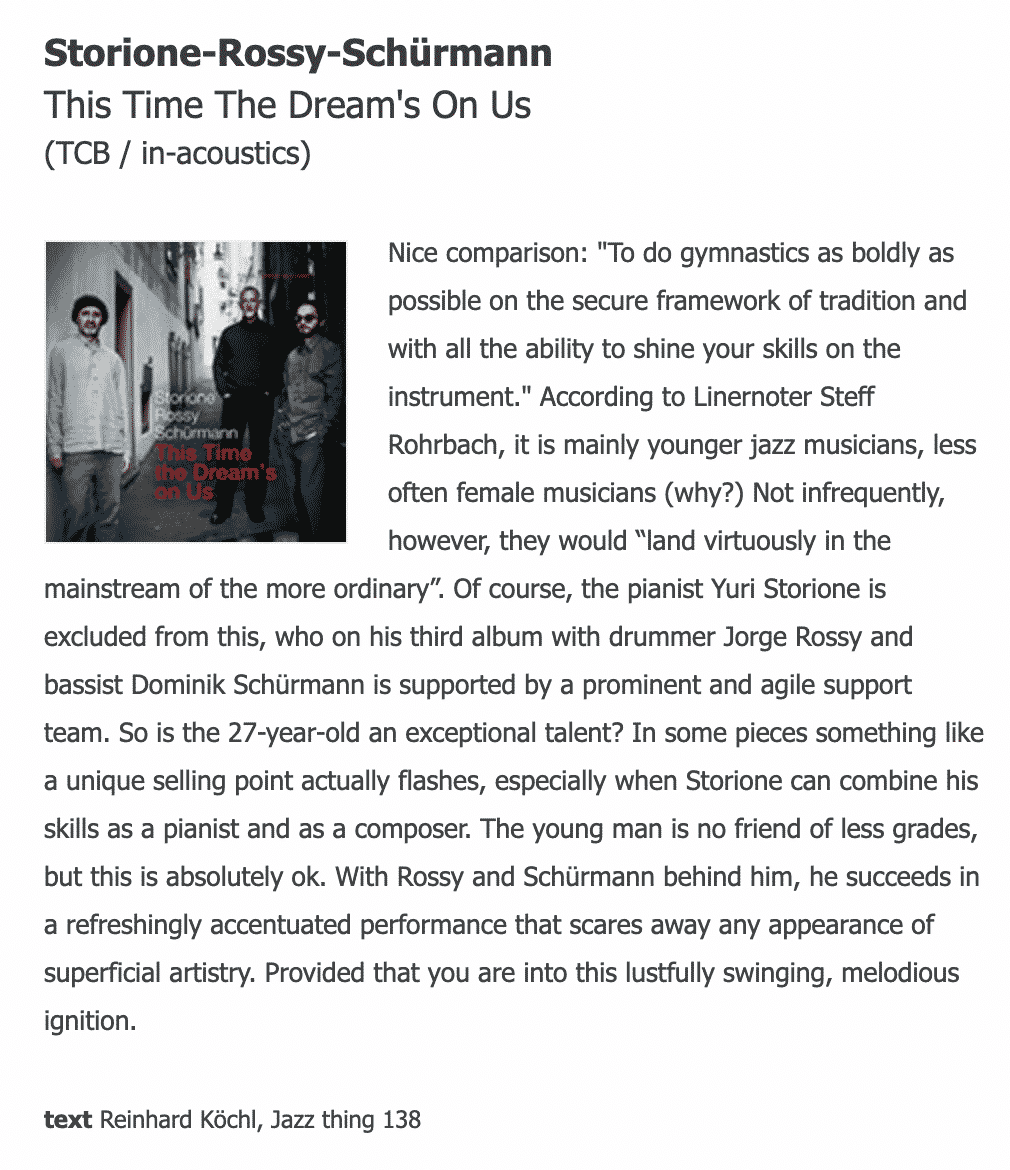 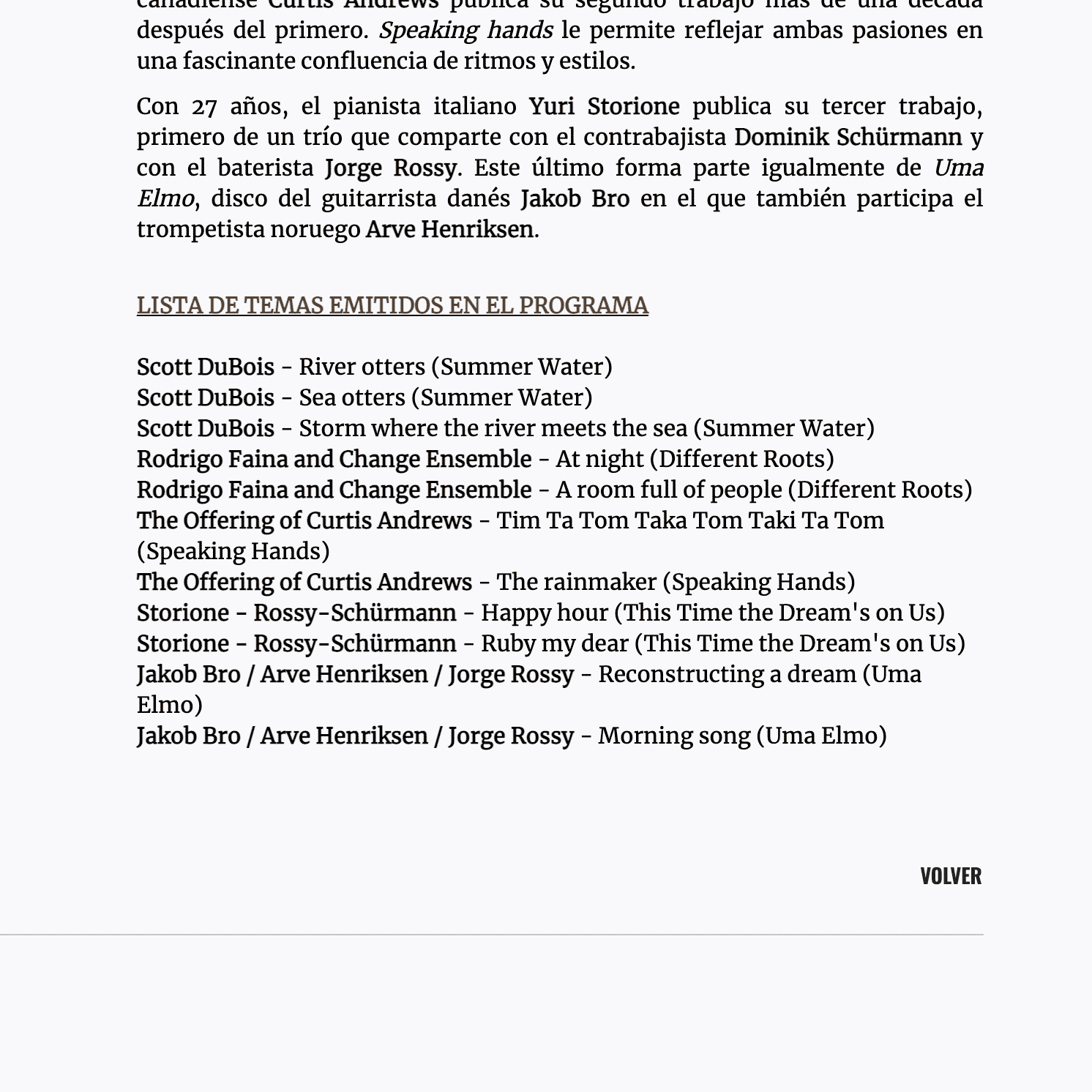 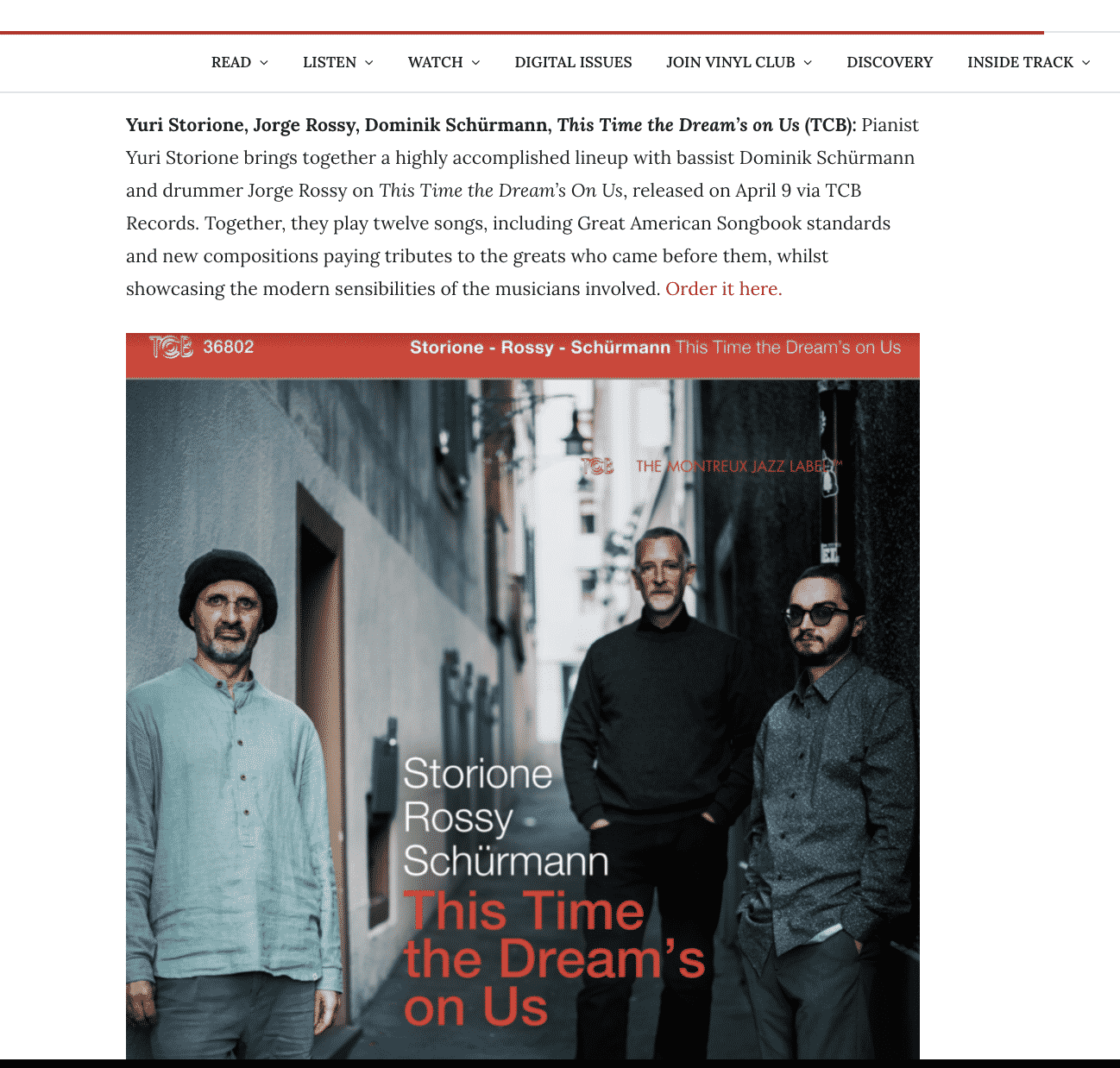 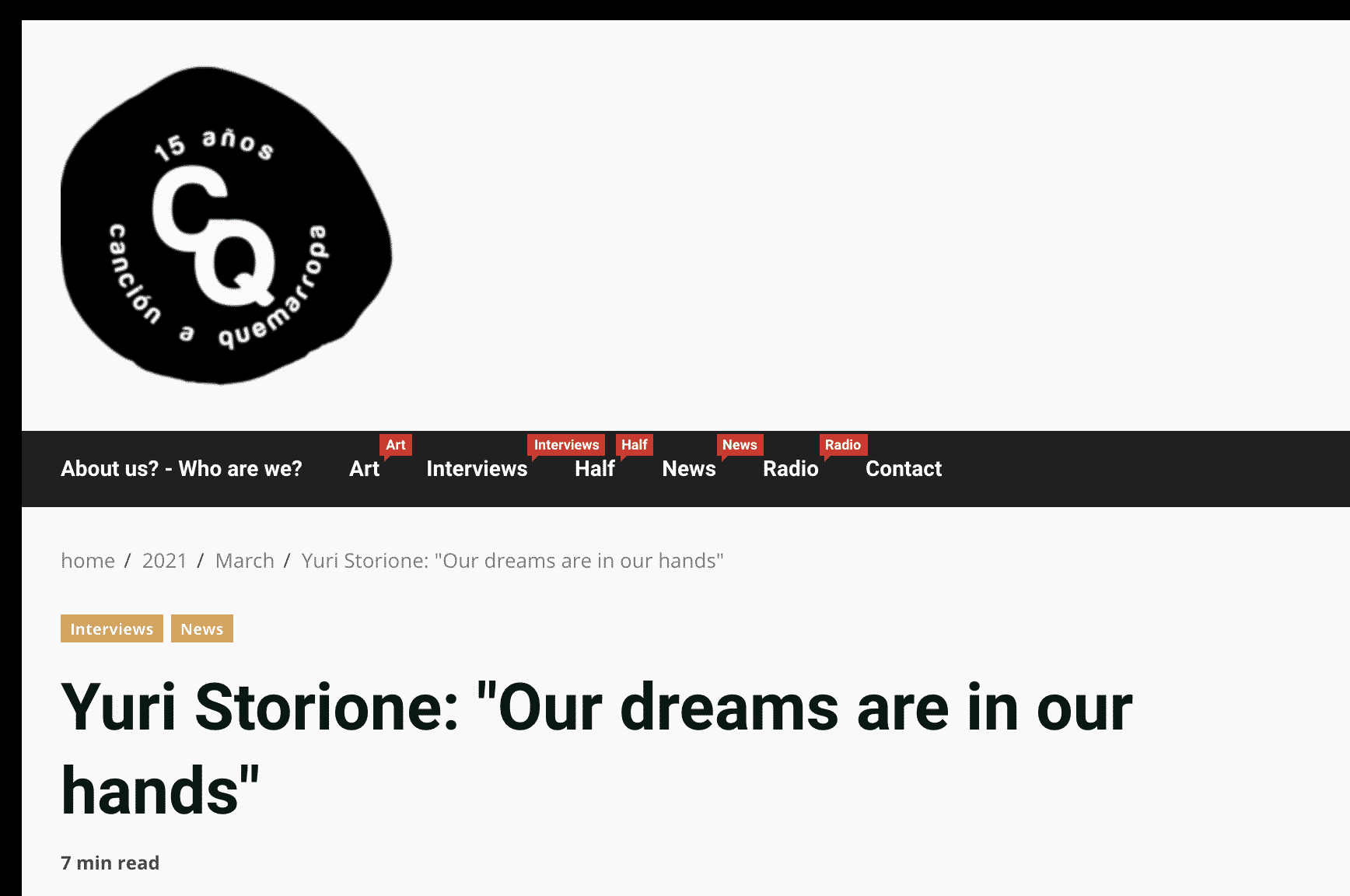 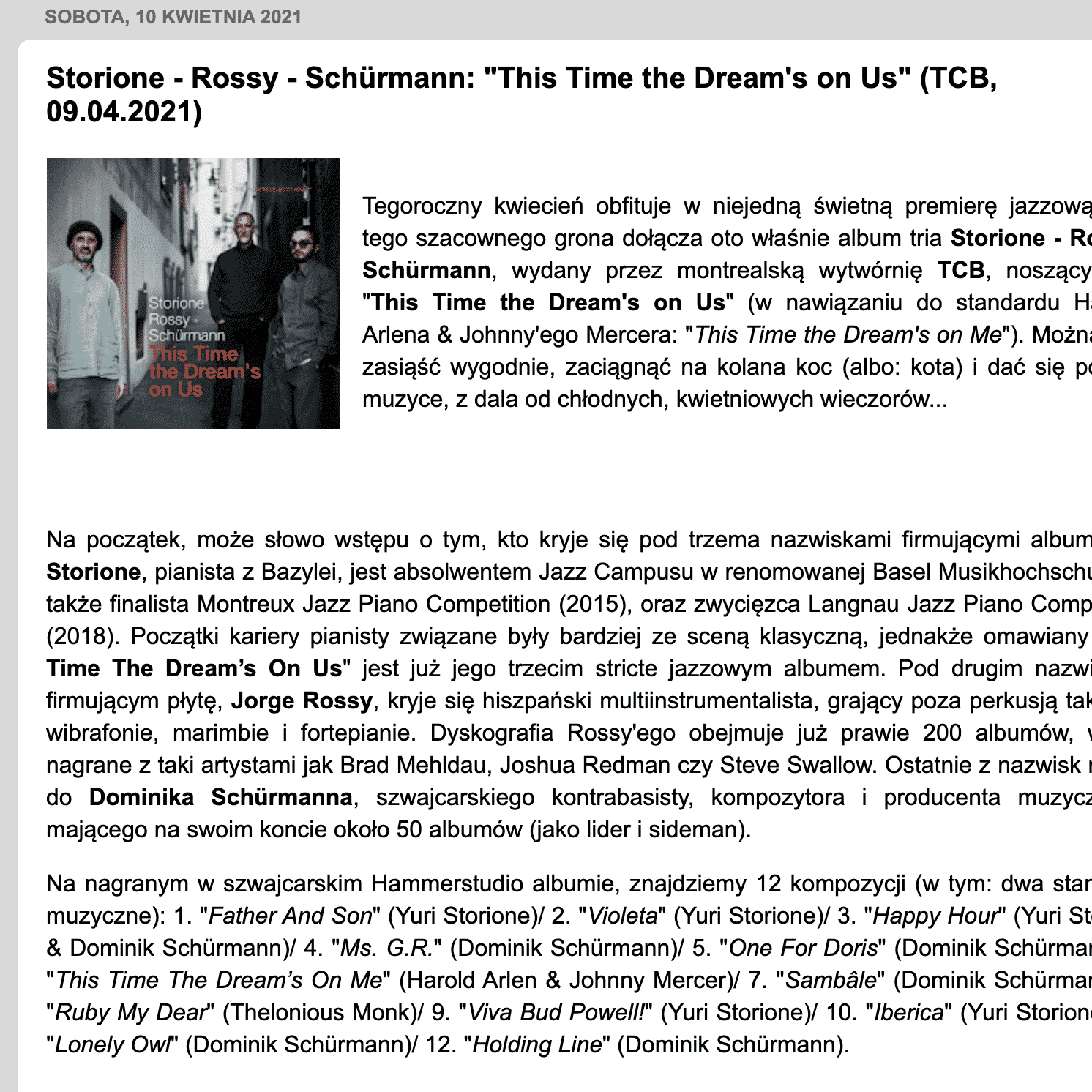 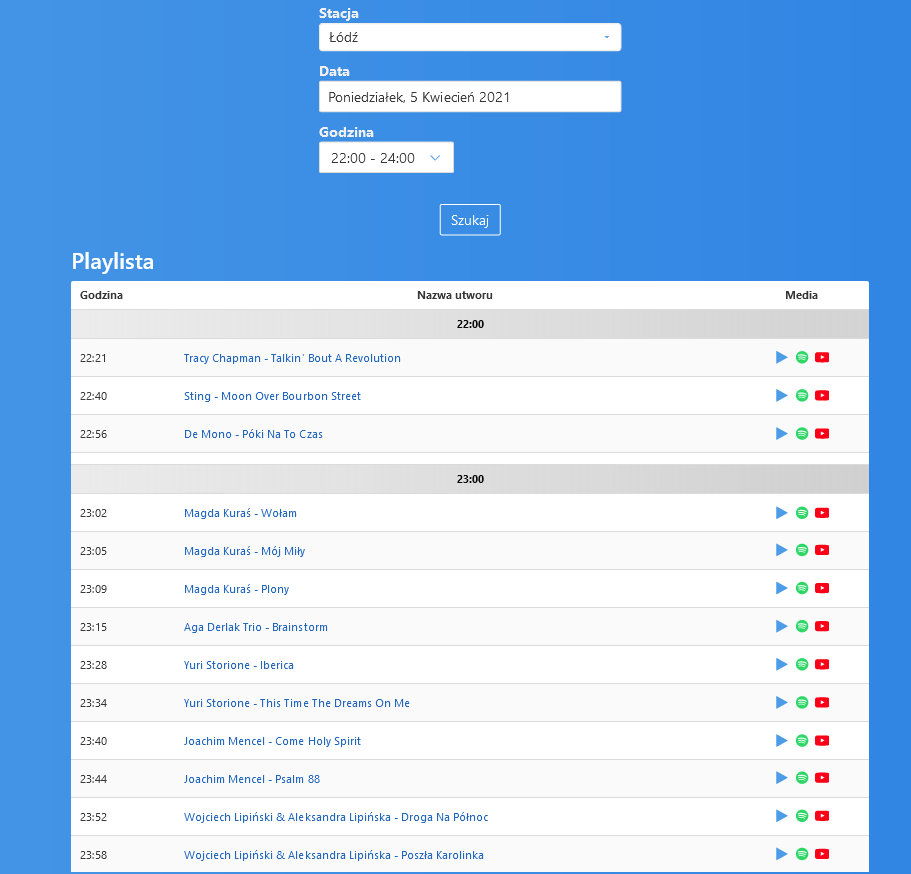 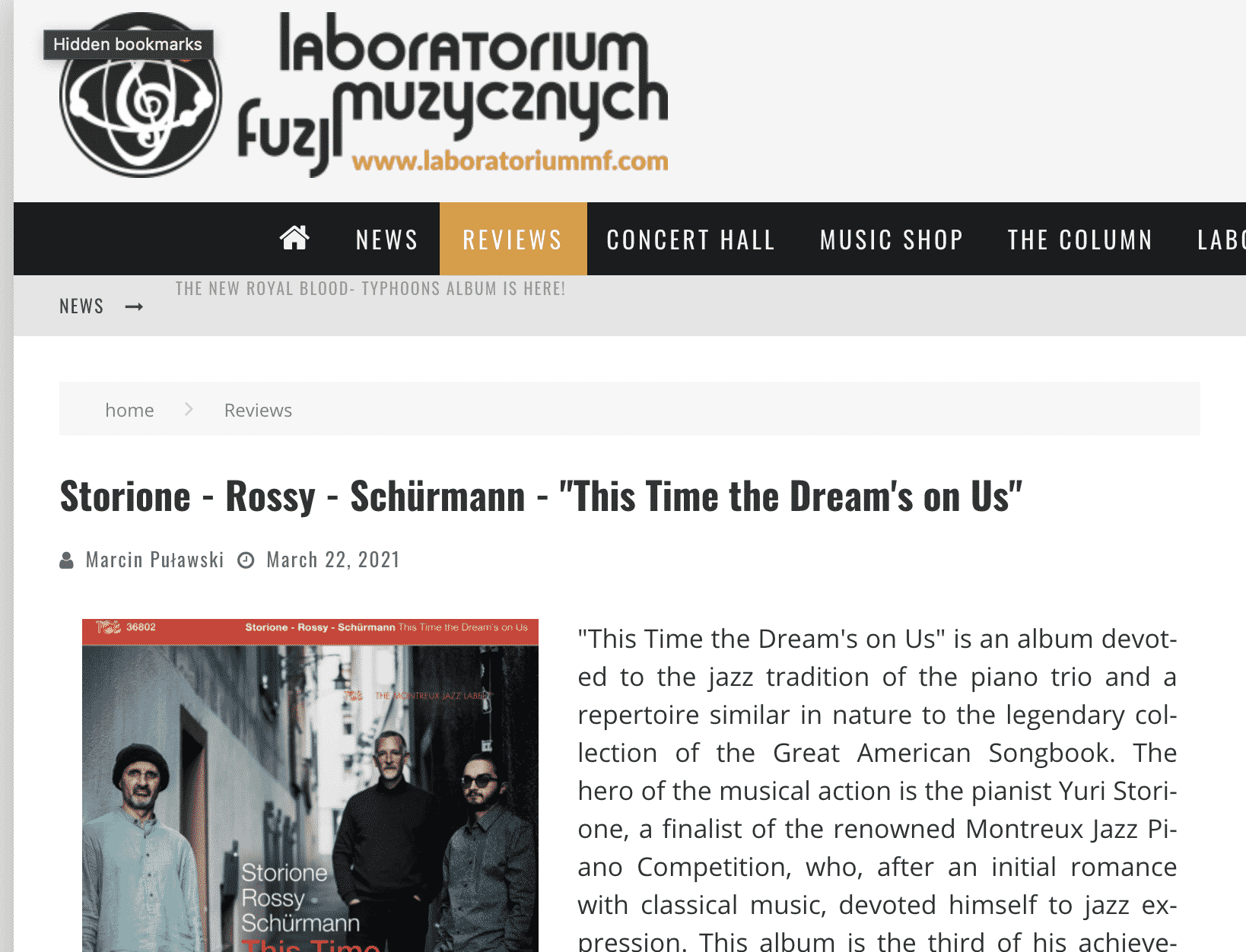