With career credits that range from European jazz greats Paul Motion & Tomasz Stanko to the stadium rock of D-A-D and The Raveonettes, Blessings reunites three long-standing heavyweights of the Danish music scene in a raw, live, chord-less trio format.

Saxophone player Jakob “Dino” Dinesen and bassist Anders “AC” Christensen rose to prominence in the 90s as part of the now legendary group “Once Around the Park” whilst drummer Laust Sonne is perhaps best known for his 20-year association with popular Danish rock band D-A-D.

As with many leading jazz musicians, though, their creative output has taken many twists and turns along the way.

And so, as with many great releases this year, the halting of tours in 2020 meant these three old friends finally had the space to hang out, play together and make this record.

Blessings is first and foremost a jazz album: the Sonny Rollins-inspired I’ve Told Every Little Star & Eddie Harris’ Freedom Jazz Dance make no secret of that. But as you might expect from three such versatile musicians, it’s infused with elements of rock, avant-garde and that Danish touch.

As the name suggests, this is a joyous album which showcases the fun and excitement that can be had playing with old musical friends. 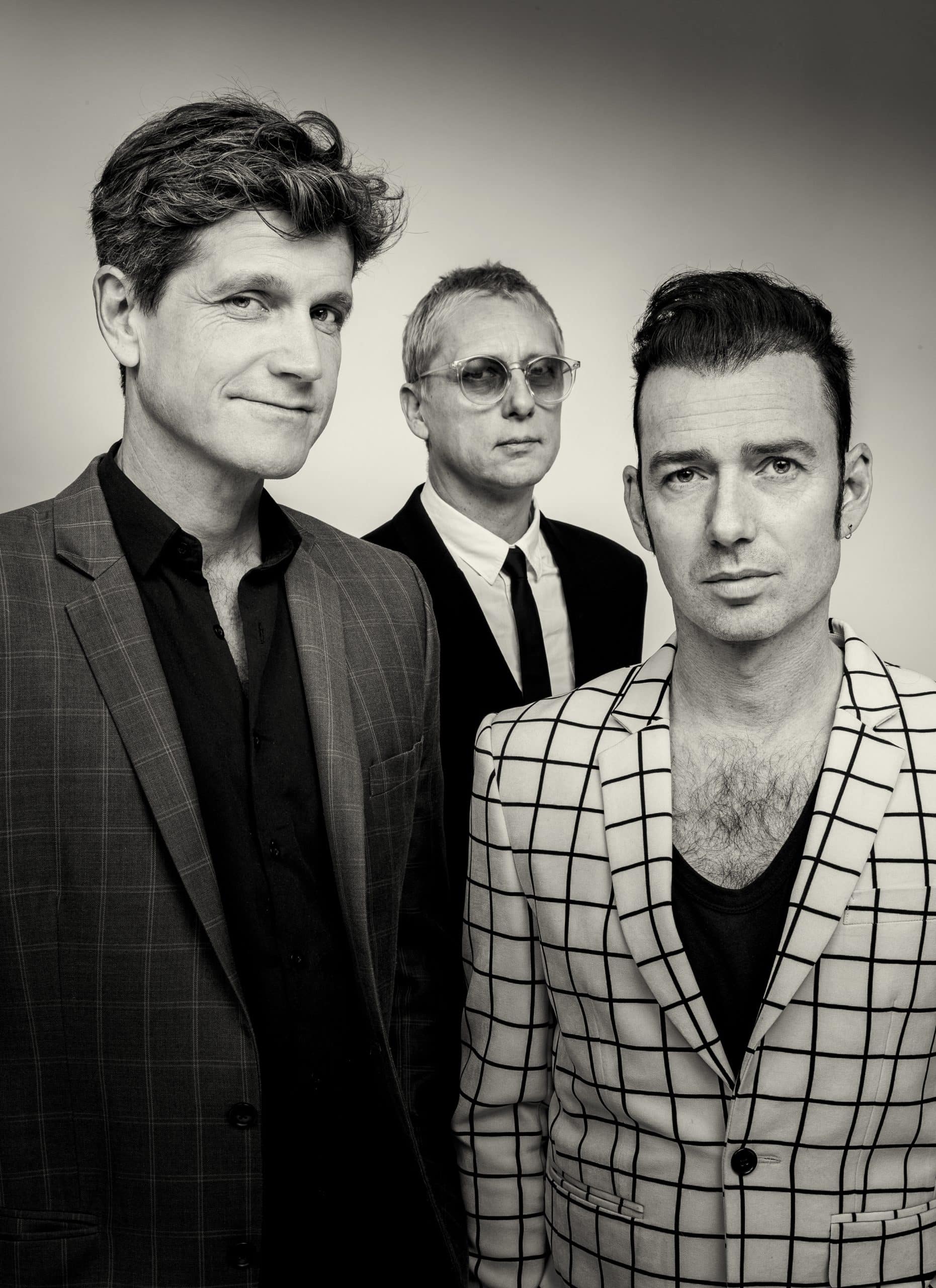 When Jan Schmidt from April Records called me and asked if I wanted to write the liner notes for this album, I was like… What? Yes, of course! I would have paid April Records money to get my name on the same cover as Jakob Dinesen, Anders “AC” Christensen and Laust Sonne. What a superb trio!

Saxophone player Jakob Dinesen and bass player “AC” have been household names on the Danish jazz scene since the nineties, where they played together in the now legendary Once Around The Park.

On this recording they are joining up with drummer Laust Sonne. He is one of the most versatile musicians in Denmark and he has been the drummer in the popular Danish rock band, D-A-D, for over 20 years. He played drums in the avant jazz rock outfit, Bugpowder, and also made a career for himself with his solo project, his own rock band, Dear. He has even made straight pop music in his own name on two albums, in 2011 and 2016. In 2007 he received the prestigious Danish music award, Ken Gudman Prisen.

Anders “AC” Christensen has been a member of Paul Motian’s ensemble and has played in Polish jazz legend Tomasz Stańko’s band. In Denmark, he has played with the Hess brothers in Spacelab, for over 25 years. In 2009 he made his only solo album so far, ‘Dear Someone’, with Aaron Parks and Paul Motian. “AC” is highly in demand among Danish jazz musicians. He has even played in a lot of rock bands, like Sort Sol and The Raveonettes.

Jakob “Dino” Dinesen has made a long string of albums in his own name and has received several prizes. He has played in Hugo Rasmussen Allstarz and Beautiful Day. Although he plays with a lot of different musicians, you can always hear that it’s Jakob Dinesen on the saxophone. He can play both a sultry ballad and some rough and ready jazz. No matter what, it comes from the heart.

The three musicians have known each other for many years. In their younger days, they often ended up together, playing late night jams and gigs at parties. It went so well that they made big plans of doing more stuff together. But it never happened.

The corona outbreak in the first half of 2020 finally brought the three musicians together again, as other plans were cancelled because of the virus. As a blessing in disguise, they began to play together again, in the rehearsal room. They found, and created, a space for their thoughts and ideas. A space for listening and playing.

In the picturesque gardens of Det Kongelige Danske Haveselskab in Frederiksberg in Copenhagen, a series of jazz concerts were held, as a compensation for the cancelled Copenhagen Jazz Festival. Among the concerts were one by this trio. It is the sounds from that concert that we can hear on this album. Peacocks were walking around in the garden when the audience was listening to the trio.

‘Free Eddie’ is written by Jakob Dinesen, in honor of his good friend and fellow music lover, Eddie Michel. It’s a searching ballad. When listening, you’ll be´travelling off on a journey, with three open-minded and empathetic musicians.

The jazz standard ‘I’ve Told Every Little Star’ was composed in 1932 by Jerome Kern and Oscar Hammerstein II. It was introduced in the musical ‘Music in the Air’. In 1961, American songstress Linda Scott had a big hit with the song. Simultaneously, the popular Danish singer Gitte Hænning was in the Scandinavian charts with the same song. The trio is giving an honorary nod to saxophone legend Sonny Rollins with their version. Rollins often played it live in the late fifties with his trio. Jakob Dinesen has a more mildly mannered tone in his playing. Laust Sonne is swinging straight to the jazz galaxy with charm and confidence.

Laust Sonne has written ‘Anouar’ as a tribute to the Tunisian oud player Anouar Brahem. It is a slow and mysterious desert soul tune. Laust Sonne shows that he has the feeling for jazz in his drum playing. Jakob Dinesen is playing with a dark and dusty tone.

‘Tyk Vals’ is a tune written by Jakob Dinesen, and it is, of course, dedicated to the late Master Fatman aka Morten Lindberg. He was a dear friend of many Danish jazz musicians and was very close to Jakob. Master Fatman was jazz in a broad sense. His touching warm kindness has inspired many.

Eddie Harris’s’ ‘Freedom Jazz Dance’ was made popular by Miles Davis, when he featured the tune on his album, ‘Miles Smiles’, in 1967. It is a popular tune to play at jam sessions, because it is only based on one chord, Bb7. There’s a freedom to express your feelings. It’s a melody which it is possible to go in and out of.

And that is exactly what the trio is doing. The trio is partying together again.

This time we’re invited to, and blessed with, a cosmic jazz party. 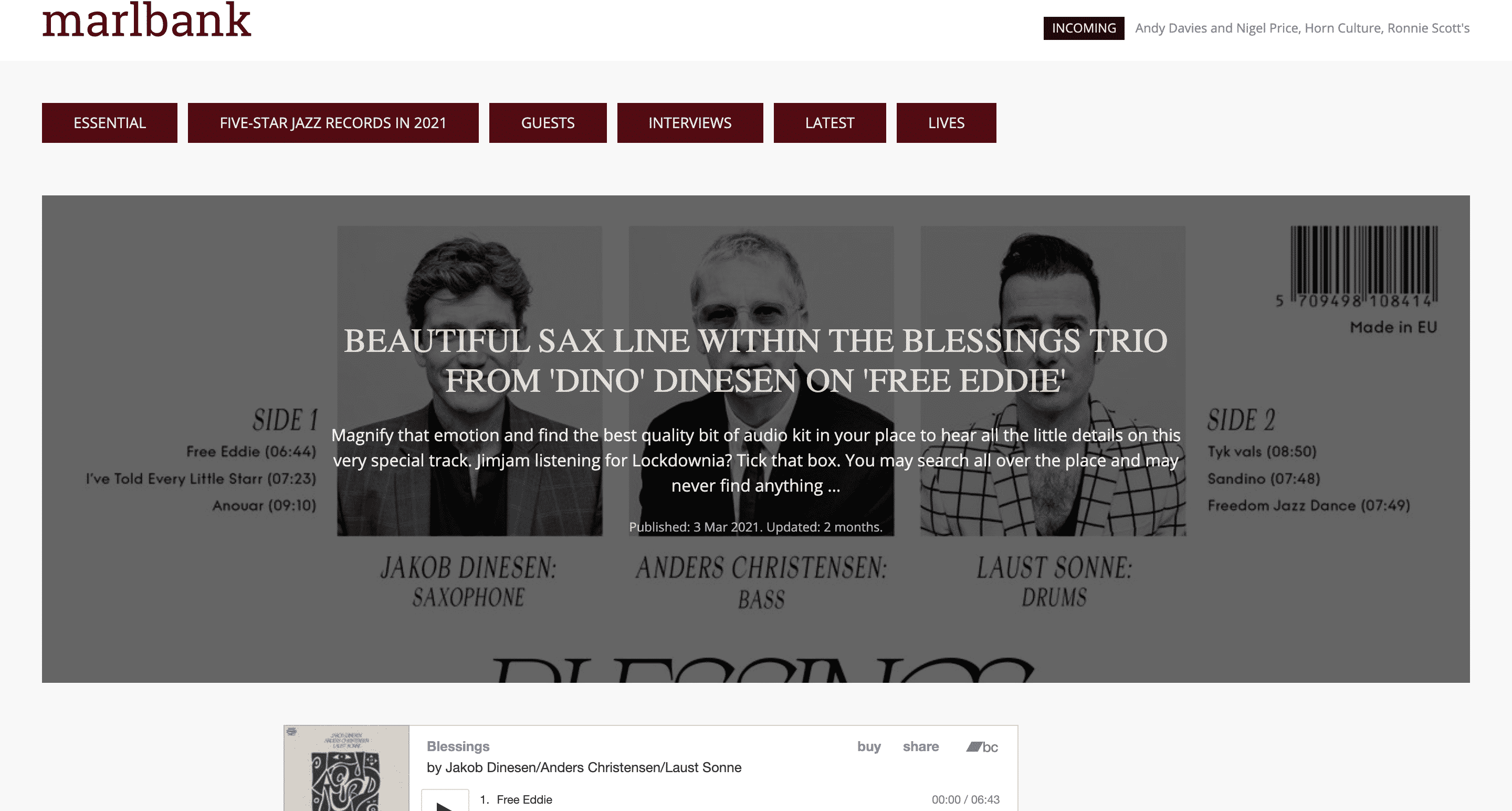 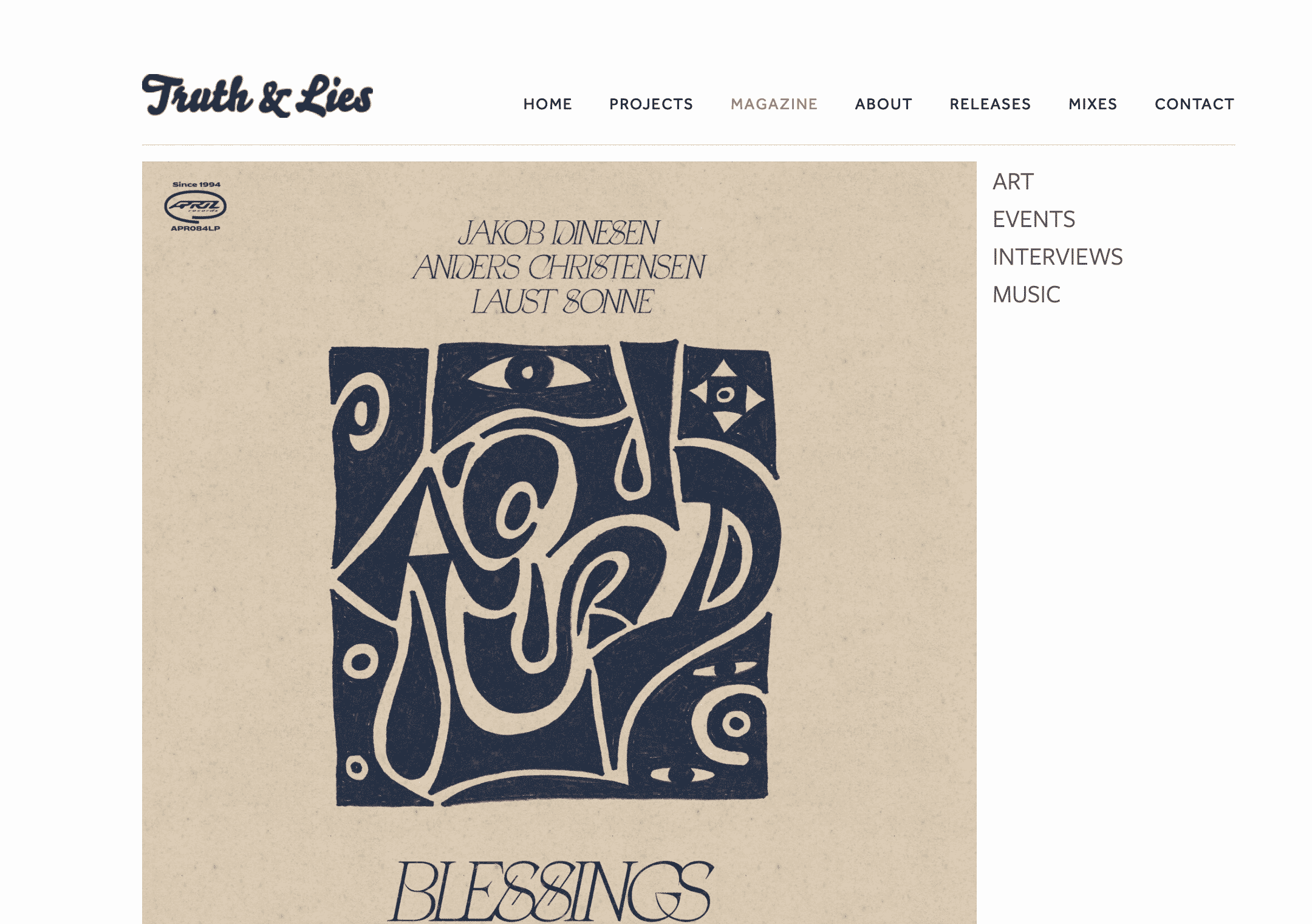 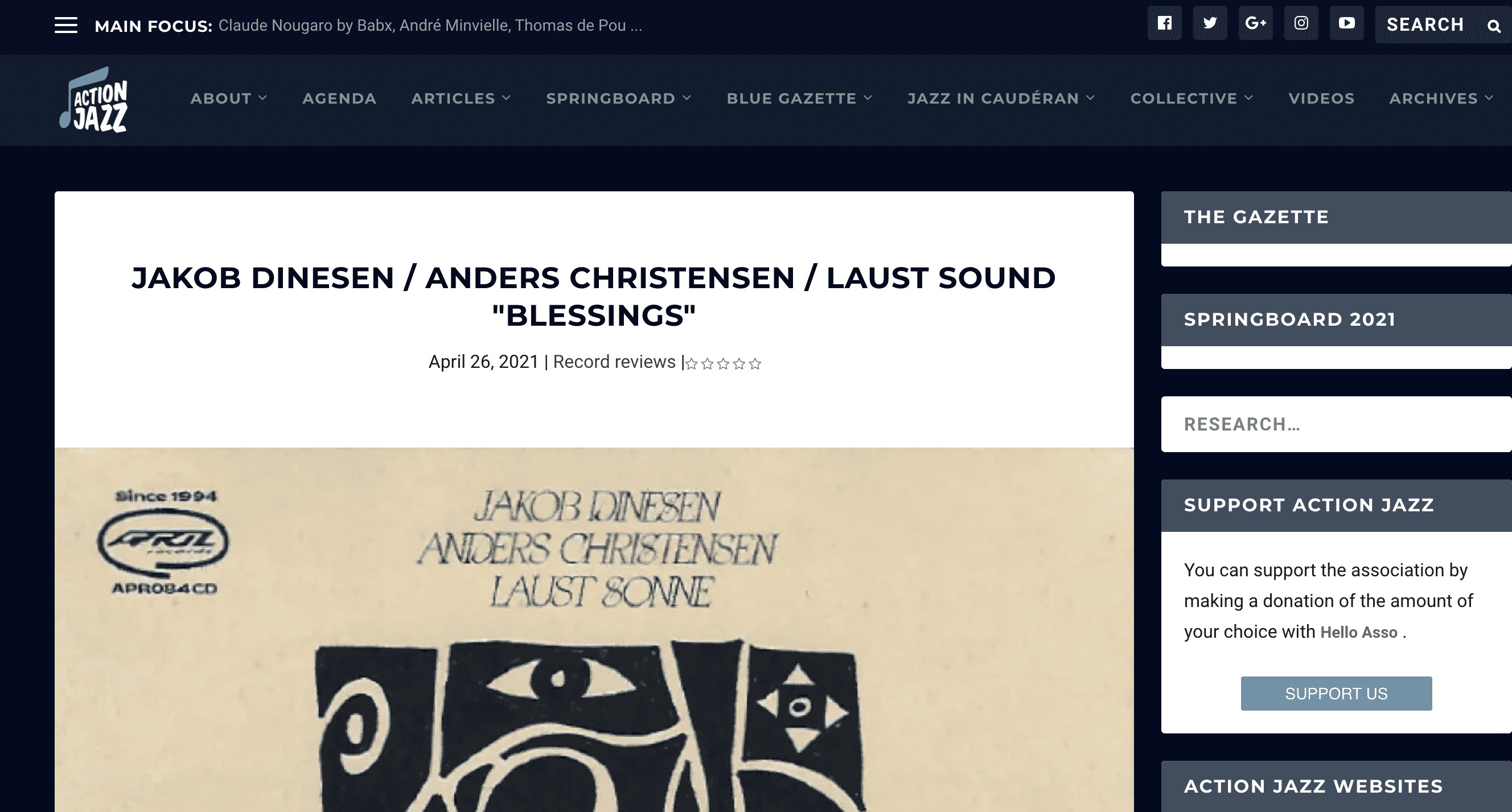 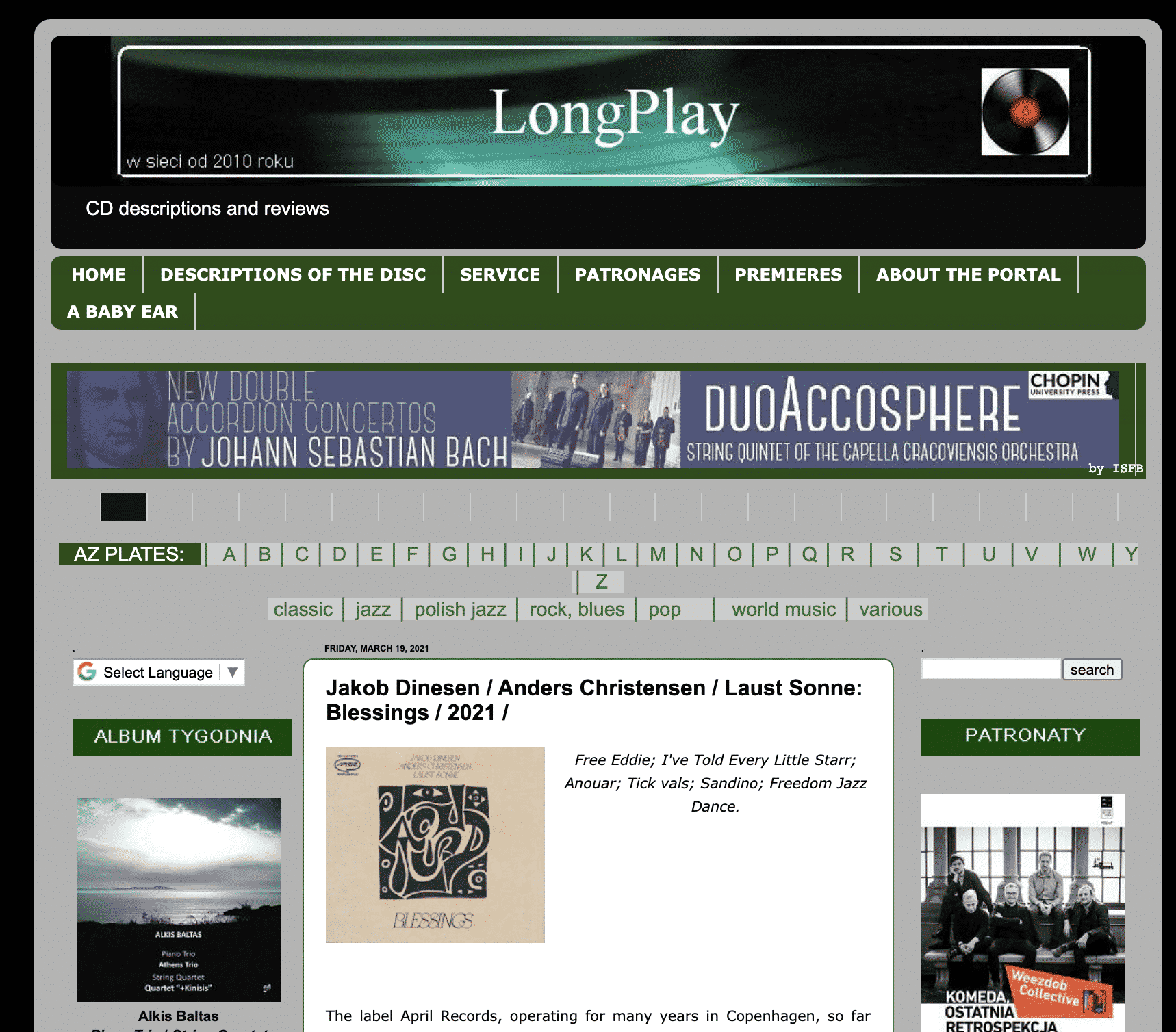 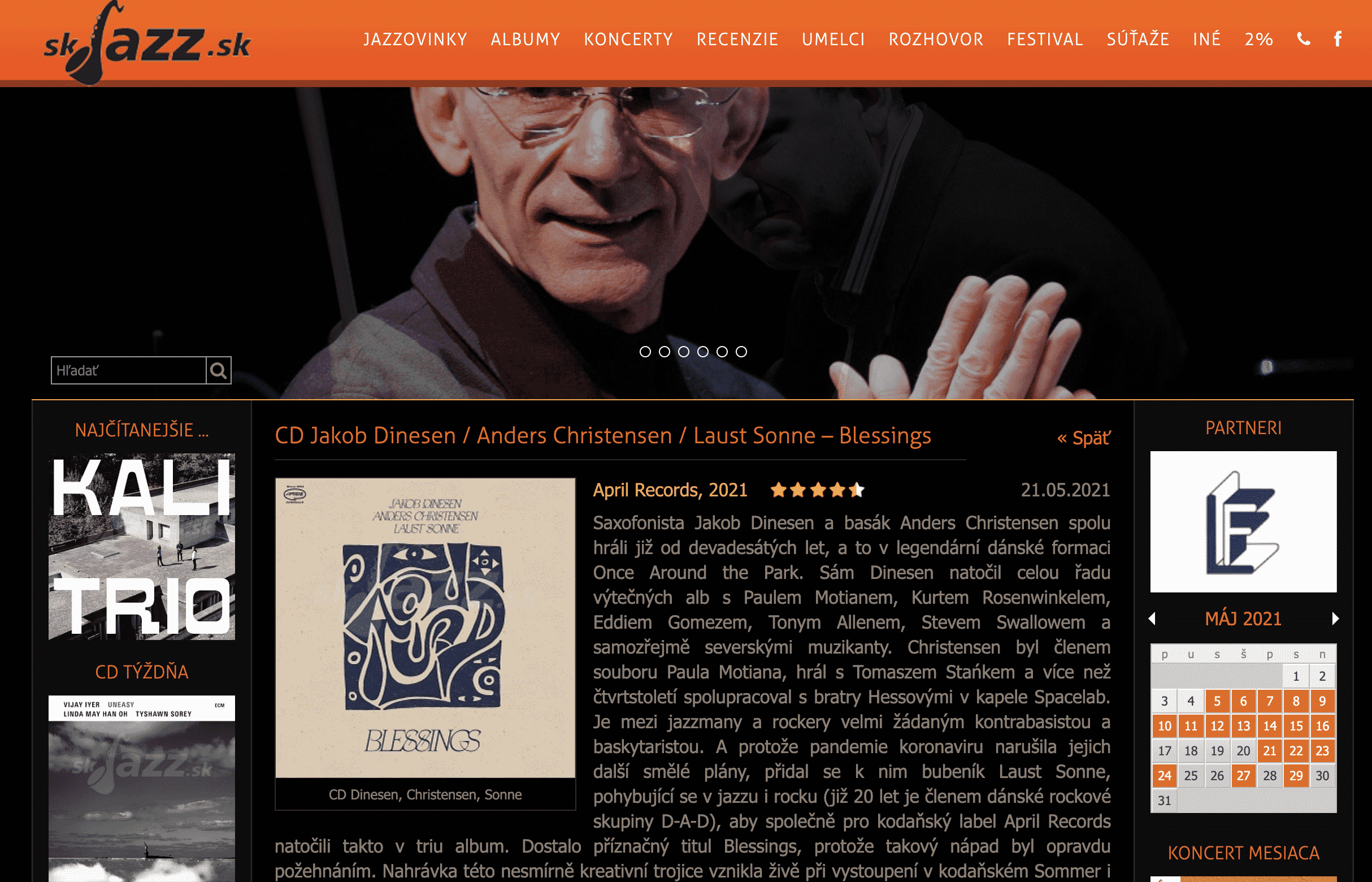 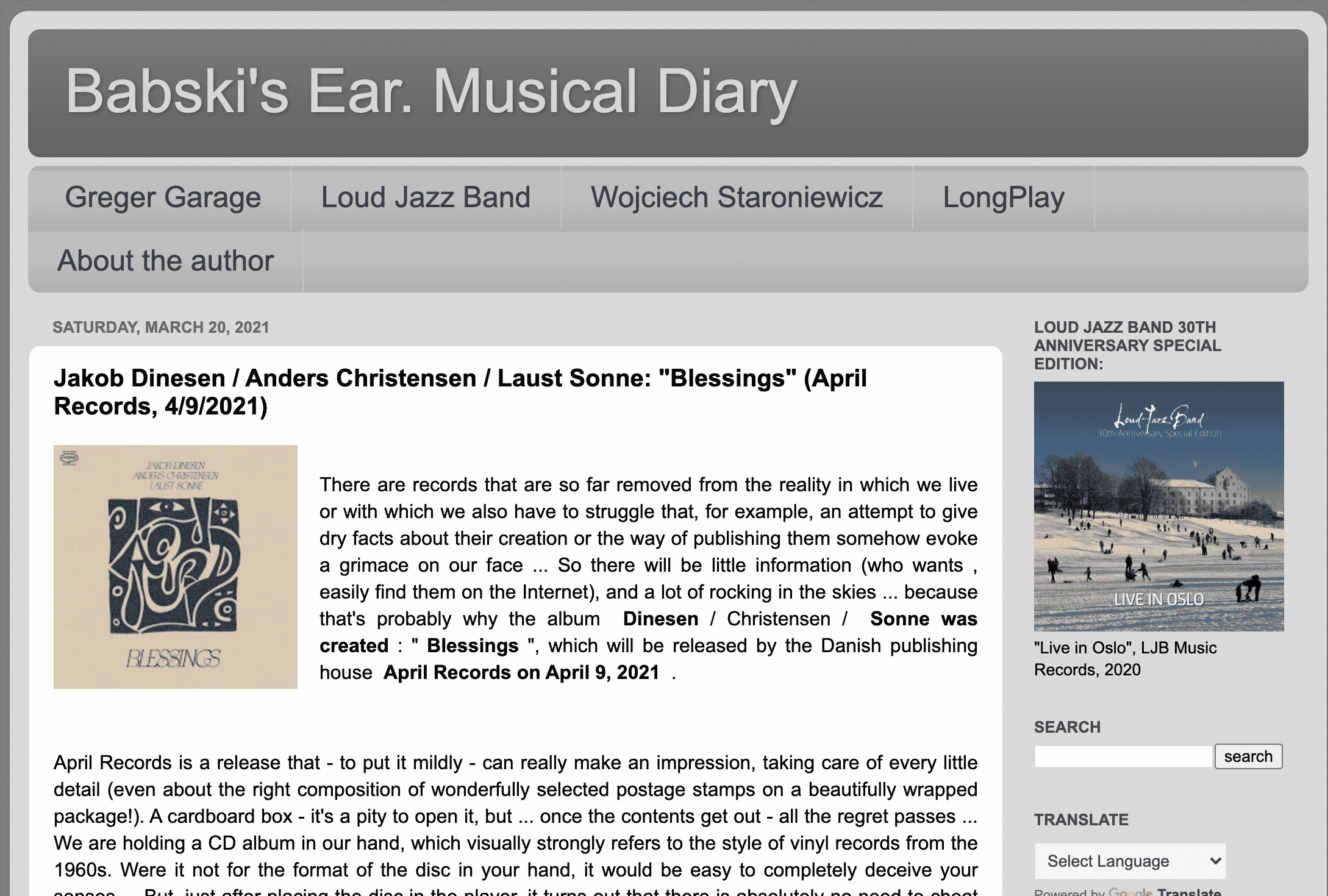