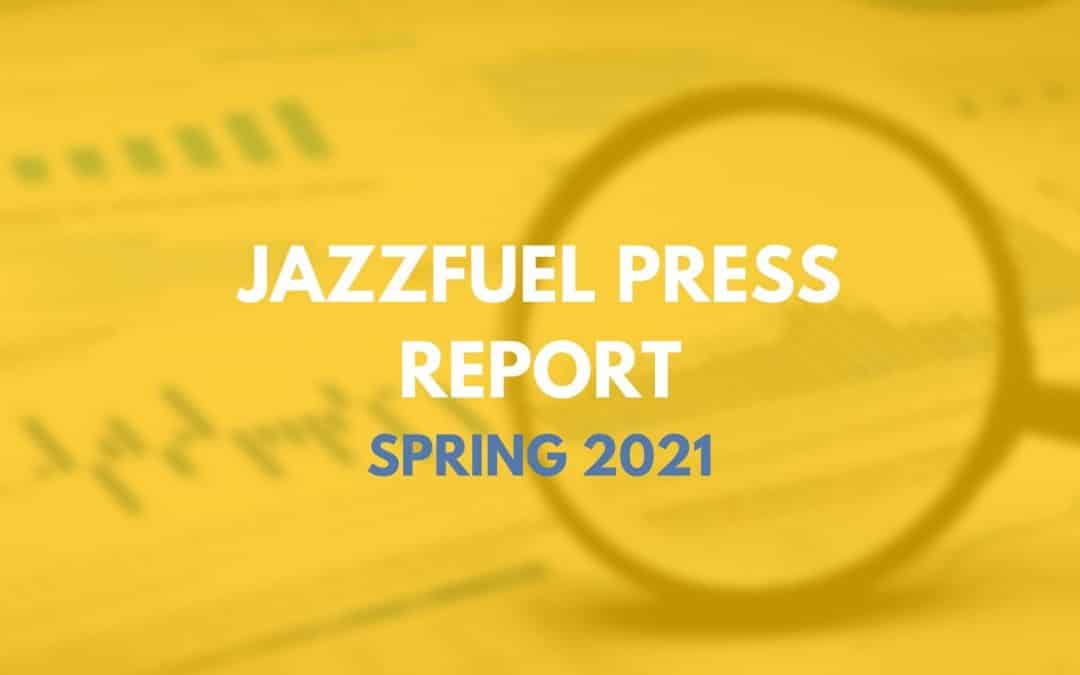 By Spring 2021, gigs were still largely on hold, but the number of great independent jazz albums only seemed to be growing!

We ran press campaigns for 25 album releases (check them out here!) in the first part of the year and have pulled together some key takeaways that you might be able to use if you have your own releases to pitch.

The main point is this:

If you reach out to the ‘right’ journalists (ie ones who review similar music to yours) in enough time (think 2-3 months ahead of release) then you should pick up some great reviews!

Credit to Arlette, Maggie & Krzysztof who have been working on these press outreach campaigns!

Lastly, if you’re planning to run your own press campaign, I put together a 20-page guide to pitching emails, with examples from real campaigns we’ve worked on. You can check that out here.

In general, the key to a great PR campaign is preparation.

However, there should always be room for last-minute changes when the situation arrives, as it did in the case of our campaign with a Danish super-group led by Emil de Waal.

British tastemaker Gilles Peterson picked up the track for his radio show and so we reached out again to all our targets to highlight this.

With so many pitches being sent every day, having a stamp of approval from a trusted 3rd party like Gilles Peterson is a great way to cut through the noise and get the project heard.

The takeaway? Be flexible during your pre-release period and circulate good news in real-time with relevant contacts.

We’ve mentioned this in previous round ups, but it’s worth flagging up again:

If there is any element of your album which sets you outside of the core ‘jazz’ area it’s well worth devoting some time to that.

Not only will it allow you to target the recipients more specifically, you’ll also be up against less ‘competition’ in terms of other jazz groups pitching to that person.

We had this situation with the recent release Anthem For The New Nation by the Paxton/Spangler Septet which features the music of South African great Abdullah Ibrahim.

We pitched it to the well-established publication Music In Africa who picked up on this meeting of Detroit with South Africa for a great review. 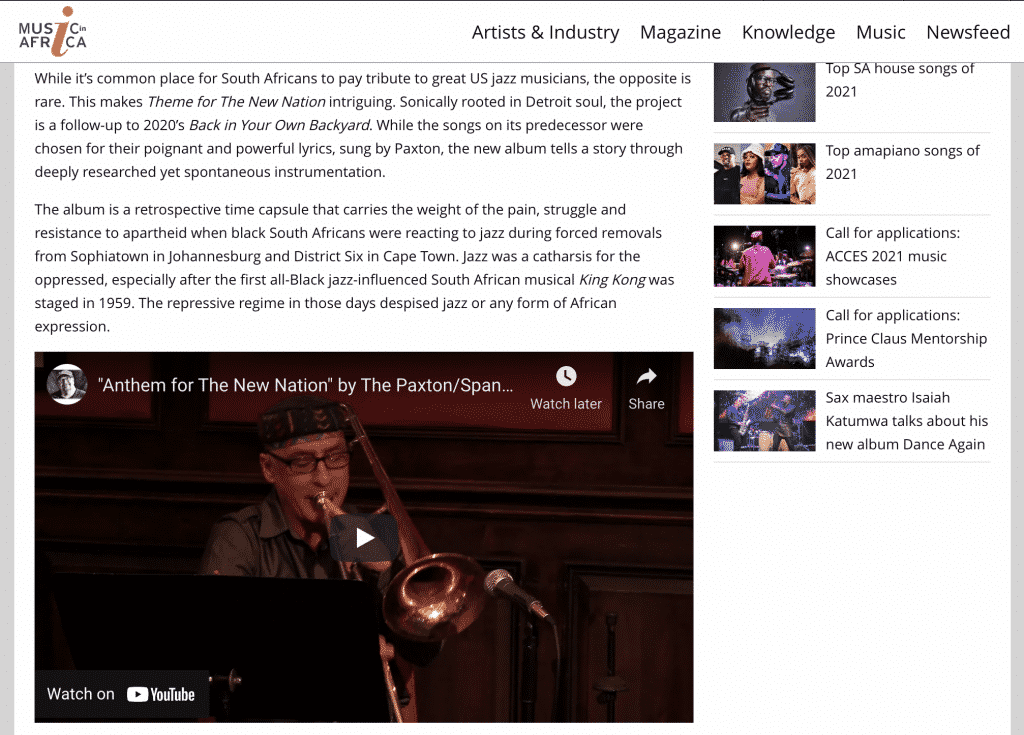 The takeaway? Of course you should target the key jazz press for a jazz release, but can you make it relevant to any other contacts on the fringe of this music where you might find it easier to cut through the noise?

So many successes in music can be attributed to playing the long term game:

Unless you’re on your first album, a new PR campaign is a good opportunity to get back in touch with journalists who supported you in the past.

In theory it’s an easier ‘sell’ too, because you know they already like your music.

We worked this Spring on our 4th or 5th campaign featuring Swiss drummer Florian Arbenz so had a good chance to put this into practice.

The result from his album Conversation #1 (with Nelson Veras and Hermon Mehari) was not just a good bunch of new reviews, but some excellent coverage from past reviewers too!

The Takeaway? Whenever someone in the ‘industry’ supports you or gives you positive feedback in any way, try to keep them on some kind of ‘VIP’ list so you can follow up with them, personally, whenever you have big news like a new album.

Getting reviews of your album may well be the focus, but there are other types of coverage that can be beneficial too.

Assuming you have your music on Spotify, there are plenty of websites and blogs out there who host embedded content.

We see this in two variations in general:

This one is particularly relevant if you don’t live in your home country.

As soon as you establish yourself on a ‘foreign’ scene you seem to be moved into a different category in your home country.

There’s somehow a little extra interest about this local artist making a name for his/herself overseas.

If that’s you, make sure you push it to the limit by reaching out to as many journalists there as possible.

We pushed this on the recent release by Belgian saxophonist Arnaud Guichard who spent formative years in London and got some nice coverage in Belgian publication Jazz’halo.

The takeaway: Wherever you’re from, there should be at least 5-6 key publications at ‘home’ that you should always keep updated with everything you do.

Tip #6: Be reactive and professional

We received an email from a well-known print magazine recently (which I won’t name) asking for urgent information on a track.

Reading between the lines, a last-minute space had come up and – if we could provide the relevant materials within the day – our artist would get the coverage.

Miss the email or take too long getting the content together and the opportunity would be missed.

Luckily we were on the case!

The takeaway? This happens more than you’d think! And, even if it’s not a deadline, professionals don’t like waiting around for answers in order to do their job. If you can be known for quick replies and easy communication it’s going to count in your favour in the long term…

If you’re releasing music with the primary goal of being able to book more gigs, getting written reviews is of course the focus because of the quotes it provides you with.

But radio – especially on a national level – can be a good addition to your profile and it’s worth reaching out to at least a few of these.

We often pitch to the excellent jazz show on France Musique hosted by Alex Dutilh and when something comes of it – such as this recent campaign with Cecilie Strange – it’s a big boost to the campaign. 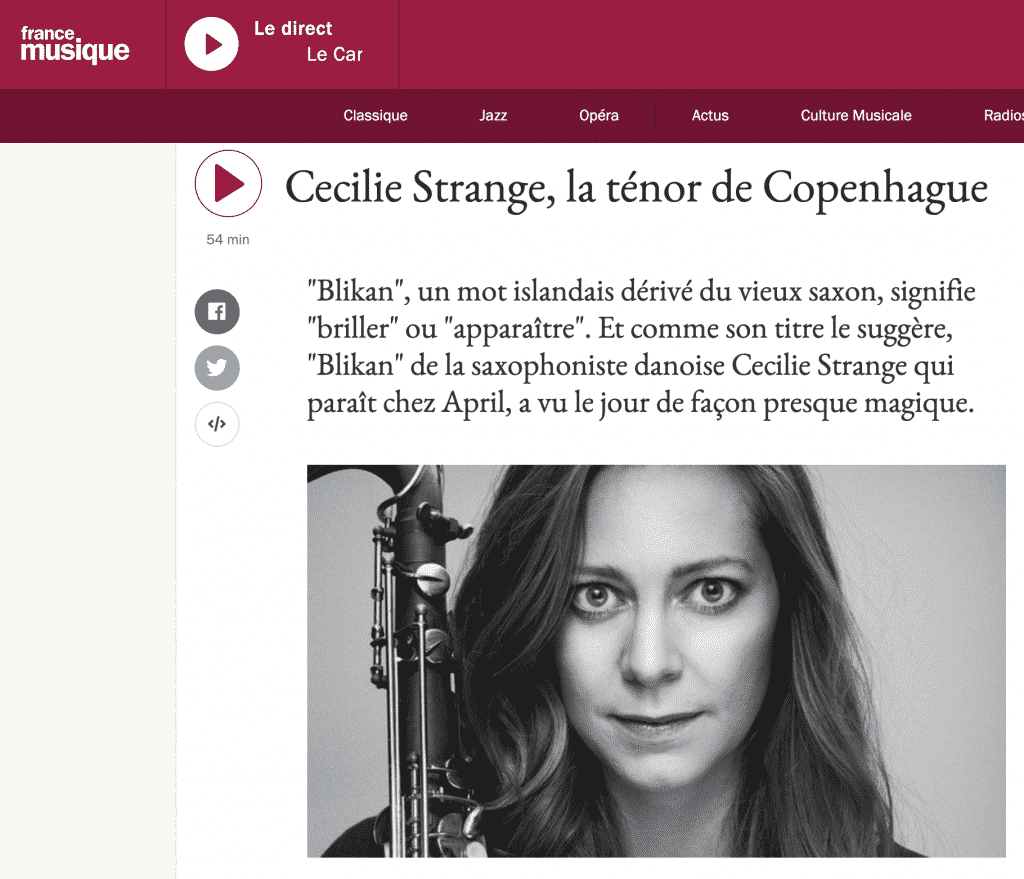 The takeaway? Try to build a hit-list of key radio stations to pitch to, and adjust your pitches to recognise the fact that they’re not ‘reviewing’ they’re ‘presenting.’

When researching targets for our press campaigns, we don’t just look at the style of the music, but also who’s playing it.

If sidemen/women in your group have released under their own name before, you may well find sympathetic reviewers that are worth reaching out to.

Of course, you can also tailor your ‘pitch’ to mention the connection right away, instead of sending copy/paste pitches.

One obvious example from our recent campaigns was the release from pianist Yuri Storione with jazz great Jorge Rossy on drums.

Knowing Jorge’s background, we did an extra push on Spanish publications and drum-specific publications, both of which brought in extra coverage.

The takeaway? Think a little outside the box when deciding which journalists might be relevant to pitch to.

We’ve of course covered written reviews and also touched on radio, but there’s a 3rd group of coverage which is worth keeping in mind: interviews.

This could take the format of an online radio show or podcast, or simply a written Q&A.

Most jazz journalists are overworked and writing a review is – when done well – a time-intensive exercise.

With that in mind, mixing in a few offers for interviews can be an easier option for some publications and lead to coverage. Of course, its’ not ‘quotable’ in the way a review is, but it’s still another way of getting your name out there.

We saw two examples of this recently:

Both great additional ways of getting the projects out there.

The takeaway? Try to figure out which blogs, magazines, podcasts & radio shows already host interviews and try pitching to them ahead of your next release.

Thanks for reading! I hope this mini snapshot of our Spring work was interesting or useful, and that you’ll be able to put some of the takeaways to good use yourself.

If you’re planning an album release, you can find all the Jazzfuel articles on this topic here or check out more info on our done-for-you press outreach campaigns here.